Last night the Austin Film Society hosted a special screening of The Rover with actor Guy Pearce popping in for a post-film Q&A. 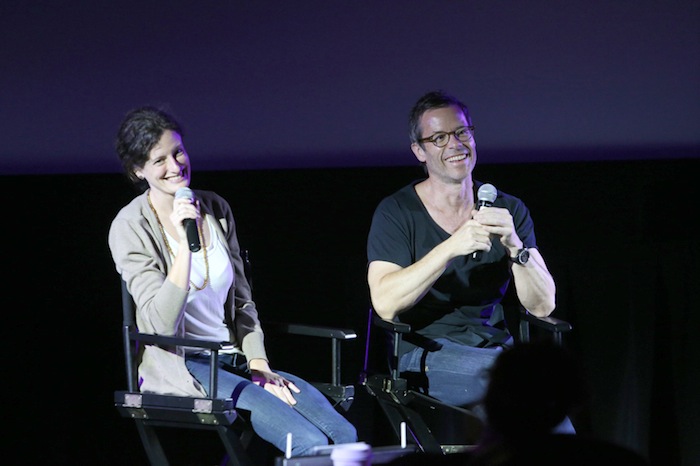 The Rover, which opened in Austin last Friday, is a gritty Western that takes place in the Australian Outback, some "10 years after the collapse," according to the opening title card. Pearce plays the lead character, Eric, who is on a mission to retrieve his stolen car. Along the way, he meets a young man named Rey (Robert Pattinson), who accompanies Eric on this thrill-filled mission.

After the screening, Pearce sat down with AFS Associate Artistic Director Holly Herrick. He commented on Austin's changing skyline – the last time he was in town was 16 years ago, when he was filming A Slipping Down Life – then got down to talking about The Rover, Pearce's second collaboration with director David Michôd (the first was 2009's Animal Kingdom). As Pearce related it, Michôd simply gave Pearce a call about a script he wanted him to read and the rest is history.

The majority of the Q&A was devoted to audience questions. Although most questions dealt with the film itself (too many spoilers to relate here), other questions prompted anecdotes about his Australian heritage and production horror stories.

Someone asked what was exactly the "collapse" disclaimer was referring to? "You know, it's funny, everyone has been saying this 'post-apocalyptic drama' but that's not what it is," Pearce explained. "It actually refers to the economic collapse a few years ago. There was no meteor that hit the Earth, or anything like that."

Pearce still lives in Australia, so when a chance to do productions in his home country pops up, he can't help but take advantage. He says he has "radar" on for projects and doing films that deal with his country in any way are meaningful to him.

Pearce wanted it known even though The Rover is a dark and bloody tale, at its core it is about finding empathy and about the human need to connect and see love through, no matter whether we want it or not.

To end the Q&A, an audience member asked about set details of Ravenous.

"No matter where I am, someone always asks me about that film. It was my most difficult experience making a movie. The original director left, then the cinematographer left. The studio did not want this gruesome storyline and wanted to make something more like Scream, which was popular at the time. Then there was a mutiny and that was that. I was flipping channels in my hotel room a few weeks ago and it was actually on TV and I texted my wife this, just because it was so random," chuckled Pearce.

The Rover is currently playing in theatres. Click here for showtimes.