An Evening With Kevin Corrigan 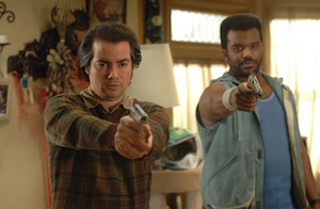 The atmosphere was carefree and light. The event was a laidback affair with the audience getting a snap shot into Corrigan's career, as well as his friendship with Byington.

The pair have collaborated on a number of films including, RSO [Registered Sex Offender] and Somebody Up There Likes Me, the latter which premiered at the 2012 South by Southwest Film Festival.

Corrigan has more than 100 film and television credits to his name. His work ranges from comedic indies to television sitcoms and big-budget dramas, an eclectic mix that includes Pineapple Express, American Gangster, and Slums of Beverly Hills.

After showing clips from Corrigan's extensive filmography, Byington asked the actor to share stories and experiences from the scenes, including the Oscar-winning picture The Departed, the second of Corrigan's two times collaborating with Martin Scorsese.

"I talked a lot with Marty about music. When I was on the set of GoodFellas, I wanted to know about the songs used in Mean Streets – I was a big fan. A few weeks after wrapping, I got a package in the mail and inside was a tape of the songs," Corrigan said.

Corrigan then joked that we would not believe the vastness of information and trivia Scorsese has acquired, sharing an anecdote about his knowledge of Iceland, which prompted booming laughs from the audience.

• For his brief appearance in the high school comedy Superbad, producer Judd Apatow wanted him to draw from his experience playing Leonardo DiCaprio's drug-dealing cousin from The Departed. "He was like, 'You know that character you played in The Departed? Play this character like that character had his own crew.'"

• Corrigan was nominated for an Independent Spirt Award for his work in 1996's Walking and Talking. He was a little upset by his loss and spent time on the beach contemplating his career. He mentioned he was mad at himself for being upset by the loss in the first place.

• While on the set of the TV sitcom Grounded For Life, Corrigan recalled thinking, "'What [am] I doing here? I'm a film actor.'" In retrospect, the actor thinks the show is pretty funny and occasionally watches it on YouTube.

The last few minutes of the dialogue was reserved for audience questions. One elderly gentlemen asked if there was role that Corrigan was born to play or really wanted. After a brief pause and a hilarious facial expression, Corrigan responded by saying, "I wanted be in the remake of The Planet of the Apes, but I guess I'll wait another 40 years to be a part of the next reboot."

Most recently, Corrigan starred in the film Wild Canaries, which premiered at this year's South by Southwest. Austinites can see the film on the big screen during the Cinema East's July 6th screening at 9pm at the French Legation. He can also be seen in Terrence Malick's upcoming film Knight of Cups.