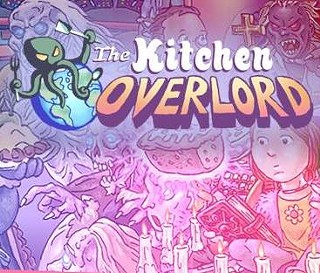 Ever wondered how cook an Arakis sand worm? Or wanted the recipe to make your own nightmarish Christmas pin wheels? Don't worry. Austin cook book author/kitchen nerd Chris-Rachael Oseland, aka the Kitchen Overlord, wants to share her fannish recipes with you.

Yes, the chef that brought you You Know Nothing, Snow, Princess Buttercups, Hydra pull-apart bread (and for the old school Farscape fans out there, frelling food cubes) is back with her latest book, The Illustrated Geek Cook Book.

Oseland is one of the pre-eminent geek cuisine experts, as well as mixing up some nifty retro booze moments with books like Steamdrunks: 101 Steampunk Cocktails and Mixed Drinks and The Unauthorized True Blood Drinking Guide.

But this time, she's collecting the recipes from her website Kitchenoverlord.com. And for those of you afraid of taking on a recipe without a step-by-step guide, there are super-nerdy illustrations by Tom Gordon, loaded with useful tips and in-jokes.

Now, normally, when a project has hit its target (and Oseland and Green hit their $3,000 target pretty much as soon as the Marlello egg hit the pom grain flour), it doesn't need us singing its praises. But now they're in the range of stretch goals. They've already released Carbs Against Humanity, but if the fund keeps going, there will be bonus recipe cards and posters for everyone. But, most importantly, as Oseland explains, and as anyone who has been around the publishing industry knows, printing an illustrated book is all about economies of scale. The more pre-sales she gets, the more gorgeous the end product can be.

Find out more about the book over at their Kickstarter page, and find some of the recipes online over at www.kitchenoverlord.com. And now, here's a little amuse-bouche to get you salivating.