If you follow the video game industry, then your Twitter feed is probably lousy with reports of new games and characters and controversies and questions and conjecture from E3. This is what Brooklynites must feel like during SXSW. Here’s the local gaming news; some of it is related to E3, sorry.

You may know Austin Wintory as the composer behind Journey, the first video game soundtrack nominated for a Grammy. Recently he posted a YouTube video taking his union, the American Federation of Musicians, to task. There’s a lot of legalese and contract speak, but the main issue is with the AFM’s most recent union contracts that dictate terms for working with game companies. The AFM's contract has been all but ignored since it was written in late 2012. Video game producers have universally and flatly refused to sign these contracts making them useless and forcing composers to work outside of the union. Wintory recorded the soundtrack for The Banner Saga in Dallas with the wind symphony there because Texas is a right-to-work state which allows even union musicians to work in nonunion capacities. This is a common tack to avoid trouble with the AFM.

Trouble seems to have found Wintory though. The AFM is suddenly enforcing its policy and threatening Wintory with a $50,000 fine and possible expulsion from the union for his work with local game studio Stoic. Wintory, a long time critic of AFM's gaming policy, took to YouTube to make his point (you can watch the video at the bottom of the page). Wintory claims the union is targeting him for speaking out against the policy. 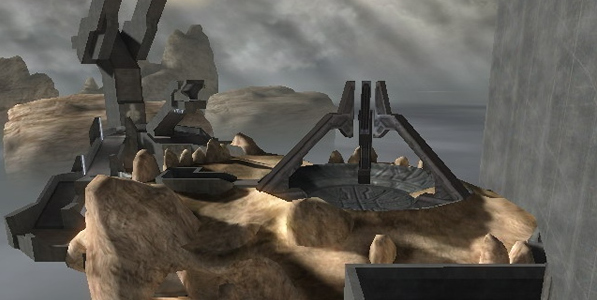 The E3 announcement that the Halo catalog was being remastered for the Xbox 360 means work for local guns-for-hire Certain Affinity. The team there has a history with the Halo franchise and will be working on creating new multiplayer experiences for the Halo 2 reboot. Audio wizards gl33k (who recently got our feature treatment) will supply the appropriate blast noises and splatter sounds. 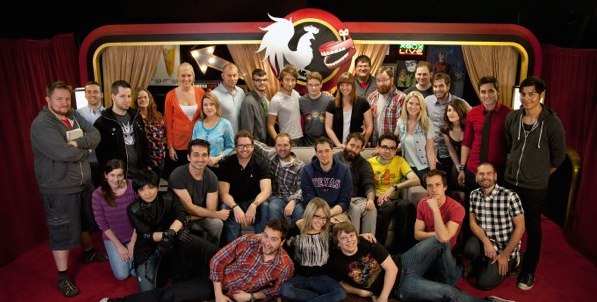 The Rooster Teeth crew before they were filthy rich. (courtesy of Brian Huynh)

You probably know local production company Rooster Teeth as purveyors of some of the finest in attention-span deficient Web entertainment. If you've watched Red vs. Blue, RWBY, Achievement Hunter, or any of their shows, you know we mean that as a compliment. Well, if Rooster Teeth can get their fans to sit still long enough Rooster Teeth wants to make a feature-length movie with the promising title of Lazer Team. Rooster Teeth took to crowd-funding, and their rabid fan base didn't disappoint. The team wanted $650,000 to make the film and earned that in the first 10 hours, breaking all sorts of Indiegogo records along the way. At the time of this post the team has around $1.2 million. In other words, this movie better be good. The campaign ends July 6, which coincides with the final day of RTX, Rooster Teeth's fan fest.

Hatoful Boyfriend: How can you not love that face? We're talking about the pigeon.

Local publisher and promotional maniacs Devolver pledged a certain amount of allegiance to Sony PlayStation at E3. Their games Broforce, Hotline Miami 2, The Talos Principle, Not a Hero, and Titan Souls will be debuting on Sony’s console. However we were more interested in Devolver's earlier announcement that they will be publishing a remake of Hatoful Boyfriend. Never heard of it? That’s because the game never got a proper American release. The player of Hatoful Boyfriend is the only human at her school and must navigate the social land mines associated with adolescence. The real twist is all the other students are pigeons. So it’s kind of like Mystery Date where your only options are the rats of the sky. Did we mention this game was Japanese? Yeah, it’s awesome like that.

Now, if you don't mind, we have to play the 59 entrants of Venus Patrol's Space Cowboy Jam. We'll report back with a few of our favorites in the coming days.