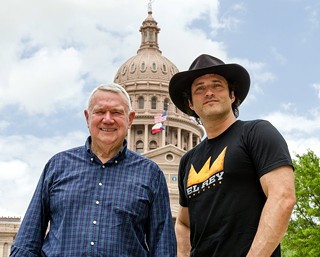 This from the "you weren't already?" files: Robert Rodriguez has announced that his El Rey Network will use Austin as its production and corporate headquarters.

In a statement this morning, Rodriguez said, "As a filmmaker and founder of El Rey Network, I can't imagine a more iconic and inspiring location for our production headquarters or for the filming of our upcoming projects."

Founded last year, El Rey currently reaches 40 million homes around the US, plus international audiences through a Netflix deal for its first original programming, the serial adaptation of vampire versus bank robber chiller From Dusk Till Dawn. Its key demographic is one that has historically been under-served by US studios and networks: Second and third generation Latinos who live in English-speaking households.

The decision to set up permanent shop in Austin makes a lot of sense. After all, Rodriguez is one of the network's founders. He has his own studio, Troublemaker, which he has set up as basically a one-stop production shop, not just for his own movies, but for studio projects like Predators. Rodriguez has also shot From Dusk in and around Austin.

But, on a more practical side, it's good news for Austin's production professionals and creative class. Feature films are great employment, but they are generally short term gigs. It's simple math: A short shoot for True Grit still means fewer pay checks and job opportunities than five seaons of Friday Night Lights. Austin has previously attracted seasons of The Lying Game and Revolution, but this announcement means more than just one show. Rodriguez has already confirmed a second season of From Dusk, and the network's second drama, Matador, starring Gabriel Luna as Tony "Matador" Bravo, soccer star by day, CIA agent by night. The network plans a total investment of $1.5 billion over the next decade, and having Austin as its base means a big chunk of that could be spent locally.

Applauding the announcement, Mayor Lee Leffingwell said, “Austin is home to creative, talented people who do pioneering, game-changing work, and Robert Rodriguez exemplifies our creative base of talent. We’re pleased that the network has chosen Austin, which speaks volumes about our film making environment.”

Another week, another festival survived. If you missed our coverage of the ATX Festival, you can find out more on our daily screens news page, including Henry Winkler aka the Fonz charming the State Theater, and Carlton Cuse on surviving Lost.

But the big surprise guest was Guillermo del Toro, who snuck into an advance screening of FX's adaptation of his series of vampire novels with Chuck Hogan, the apocalyptic The Strain, debuting on July 13. Here's the first trailer for the show, which features bloodsuckers of the definitely non-sparkly variety.

On a side note, del Toro let it slip in Austin that he's working on his own time on a sequel to his kaiju versus robots blockbuster Pacific Rim: While the original wasn't a monster success in the US, international ticket sales and a really strong fab base mean that, when del Toro finishes his script, there's a really good chance that he'll find financing.

Two catering-related pieces of Alamo Drafthouse news. The construction at South Lamar continues towards its schedule Summer opening, with an update showing the bowling lane dance floor at the relocated Highball almost complete, plus an ominous metal construct just dubbed The Mothership. So far, the plan remains to have the whole cinema site up and running in time for Fantastic Fest 2014. However, there will still be lots of construction going on at the rest of the development, and there's some serious head scratching about how they'll handle parking until the work is all done.

Less welcome news in Drafthouse circles is probably the word out of the Austin Business Journal that the Alamo Lakeline is being sued for failure to pay minimum wage and incorrect tip pooling practices.

Did we forget anything? Give us a shout at filmflam@austinchronicle.com.