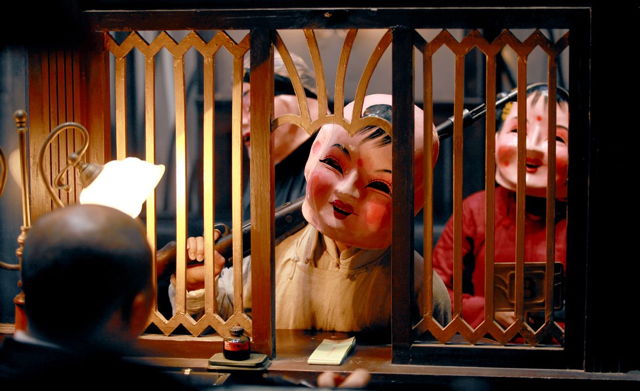 One of the more welcome arrivals aiming to take your money is Eastern Bandits (Well Go USA), the latest in a growing canon of Chinese World War 2 occupation dramas. The Japanese invasion of Manchuria remains a seemingly endless source of cinematic inspiration, and considering the growing tension between the two countries in recent years, it's a little unnerving that Chinese film makers go back to the well so often.

However, writer/director Shu-peng Yang brings a fresh sharpness to the tale of kidnapped bridegroom Gao (Yi Zhang) and his attempts to convert bandit chief Fang Youwang (Xiaoming Huang) into becoming a guerrilla against the enemies of the state.

In his third feature, writer/director Yeng shows a mastery of set pieces, but it's really cinematographer Yu Cao and composer Kaili Peng that give this well-worn narrative new vigor. They inject a Spaghetti Western sensibility into the traditional Chinese bandit tale: True, that's been done in Asian films before, but they do it better than most, much as Walter Hill and Ry Cooder resurrected the spirit of Howard Hawks with the under-appreciated Last Man Standing. Cao's bleached out pallate clearly evokes Sergio Leone's re-invisioning of Spain as the Rio Grande, and there's the sense of every gun fight and shoot out as bullet-riddled destiny, a kinship to The Wild Bunch and Butch Cassidy and the Sundance Kid.

But it's not just a period piece: There's a firecracker of a bank robbery that could stand shoulder-to-shoulder in a line-up with any moment from Heat (still the gold standard in heist movies.)

Yeng's script, co-written with Lao Huang and Xiaobei Zhang, also has an unexpected acid twitch to it. Gao doesn't simply redeem the bandits: he simply turns their violence to his own patriotic ends. And Fang is not a conventional hero, nor is there a moment where he undergoes a Han Solo-esque leap from shady character to outright good guy. 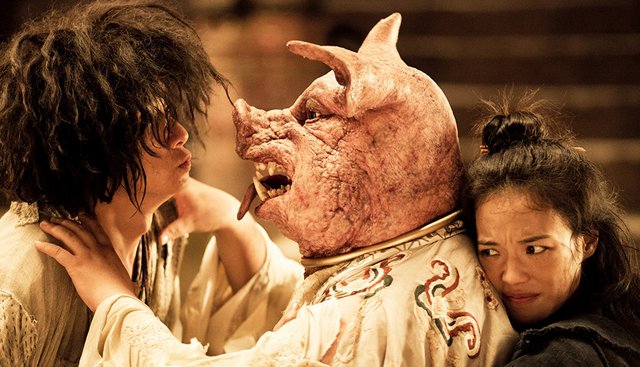 Another recent release, another standard of Chinese cinema. This time it's everyone's favorite gonzo martial arts director Stephen Chow (Shaolin Soccer, Kung Fu Hustle) taking on the opening chapters of Wu Cheng'en's 16th century classic novel Journey to the West. The original chronicles the long expedition of the monk Tripitaka to India to find Buddhist scriptures in India. Wu's novel is loosely based on the historical adventures of monk Xuanzang (it's fairly likely that the legendary figure didn't actually share his journey with a pig demon, a fish demon, and the Monkey King.) But then Chow's Journey to the West: Conquering the Demons is extremely loosely based on Wu's novel.

Xuanzang (Zhang Wen) is not a monk, but an extremely inept demon hunter, who thinks he can sing nursery rhymes to monsters and bring out their inner child. Clearly, that works about as well as would be expected, with villagers getting consumed and demons handing a righteous pummeling on the hapless Xuanzang. He is quickly overshadowed by the more flamboyent and aggressive demon hunter Miss Duan (Qi Shu, Tai Chi Zero, The Transporter), who inexplicably falls for the passive young monk as they face a progression of increasingly malevolent spirits.

Journey is at its best and funniest when their great adversary, the cunning Monkey King, appears. It's a little surprising that Chow passed on Siu-Lung Leung, Kung Fu Hustle's beloved Beast, to play the mischievous godling, but Bo Huang more than makes the role his own. Fortunate, since Wen (clearly a stand-in for Chow) is a bit of a damp rag.

It's always great to have a new Stephen Chow movie. But beyond some spectacular set pieces, Journey seems a little lackluster, and his frenetic style gets bogged down in the chapter-book narrative. Wu's novel and goofy can mesh. Just look at the beloved 1979 TV series Saiyuki, better known to Occidental audiences as Monkey. That was charming and crazy and funny, but still loyal to Taoist spiritual roots. Chow almost seems too respectful of the story, and so it never quite takes flight in the same way that King Fu Hustle did. That had just as much of a journey to enlightenment in it, but it kept its sense of irreverence.

Potentially, this will all feel more even if Chow moves on with purported sequels, and the more Chow, the better. 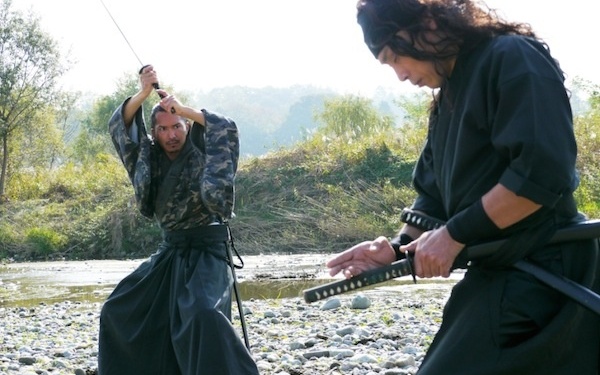 The old "clash of styles" martial arts standard gets a revisionist sheen in Bushido Man (Image courtesy of Shout! Factory)

There's far smoother and more satirical take on an old tale in Bushido Man: Seven Deadly Battles (Shout! Factory.) It hits a completely different but equally familiar Asian cinematic trope: The clash of styles. From Game of Death to Man of Tai Chi, it's arguably been done to death, and it's hard to find some innovation, but writer/director Takanori Tsujimoto finds two new twists. First, it's set in Japan, rather than China. Toramaru (Mitsuki Koga) returns to his master Gensai (Yoshiyuki Yamaguchi) after travelling the land, seeking out seven opponents of differing schools to defeat in battle. Thus, clearly, the name.

So far, so standard.

But Gao also undertakes a culinary journey as well. Before facing each adversary, he eats a meal suitable for his next opponent. If he defeats them, then he wins the scroll describing the precepts of their martial art.

As much as it is an opportunity for to show off his fighting skills, it's also a chance for Tsujimoto to emulate generations of martial arts directors before him: A Shaw Brothers nod here, as Zaitoichi homage there, segueing into headbutt-heavy Yakuza knive fight in a post-apocalyptic Yokahama. Reuniting with Koga and Yamaguchi after future revenge fantasy Hard Revenge Milly, they have as much fun with Toramaru's meals as they do with the combat forms. Each dish becomes a pun and a challenge, as Gensai finds clues in Toramaru's eating habits as to who the next opponent will be.

If the Hard Revenge Milly shorts seemed stilted, Bushido Man is eager to throw everything at every wall and see what sticks. It may get a little gonzo-goofy for some tastes towards the end (including a fabulous piece of fourth wall violation in the closing battle) but it's light-hearted, hard-hitting entertainment that will undoubtedly appeal to fans of derange-o fight fun like Versus. 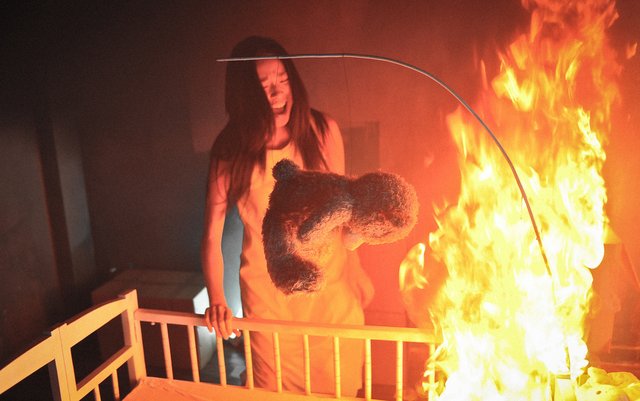 Nothing like coming home to a nice warm fire: Vietnam meets J-horror in House in the Alley (Image courtesy of Scream! Factory)

Husband and wife Than (Son Bao Tran) and Thao (Thanh Van Ngo) are in mourning after their baby is stillborn. It's the only gruesome scene in the film, with a shocking and bloody depiction of a miscarriage. After that, Kiet depends upon jump scares and creepiness. The pair have been gifted a small house by Than's family, a clan of factory owners who are in the middle of a labor dispute. He's being dragged into that, while still trying to support his distraught and near-bedbound bride. However, there are other forces at play. It seems the death of their child (whose corpse she insists on keeping in a coffin at the foot of the bed) has summoned something supernatural up on the roof.

Cue footsteps, reflections that don't match the reality, children's laughter, and everything that we saw a decade ago when J-horror ruled the festival circuit. Tien does it all competently, but adds nothing fresh to the post-Ringu equation, and seems to struggle to pad out the 90 minute run time. Let's just say there's a lot of Than peering up over the roof top, almost seeing something, and then falling off.

It may seem a little harsh to condemn this House so quickly: After all, the country only started making horror films in 2004 with Oan Hồn, followed in 2007 with the more famous Muoi: The Legend of a Portrait. Moreoverits censors have been pretty draconian on what can and cannot be shown. In fact, it's a borderline dissident act to even show ghosts in a Vietnamese film, and for that alone the Vietnamese-born, American-raised should be applauded. But unless you've got a lot of patience for the "been there, shrieked at that" school of scares, there's no rush to raise the spirits of this abode.

Journey to the West (Magnet), House in the Alley (Shout! Factory) and Eastern Bandits (Well Go USA) are out on Blu-Ray and DVD now. Bushido Man (Seven Deadly Battles) (Shout! Factory) is out June 10.