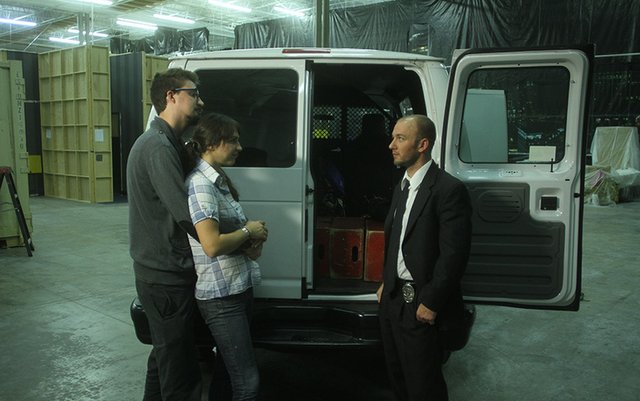 24 Exposures, the latest from Joe Swanberg, blurs the frame between artistic vision and crime obsession (Image courtesy of IFC Films)

Adam Wingard is an obsessive about perversion. That's probably why he's the inspiration and star of the latest flick from Joe Swanberg, 24 Exposures.

Doubtful that the director of You're Next and A Horrible Way to Die would take that as an insult. After all, he's the master of the NSFW Twitter feed, switching between fetish photography and film concept artwork.

This is Swanberg ricocheting back from the mainstream success of Drinking Buddies as hard and as radically as he can. If you're expecting more of the heart-wrenching, tender, funny exchanges, then check a different shelf. Or wait for Happy Christmas, his upcoming second collaboration with Pitch Perfect star Anna Kendrick.

It's the lo-fi Stand by Me, both a return to Swanberg's early improvised work and a stylistic evolution. It also depends heavily on his old habit of using friends and fellow filmmakers, most notably Wingard, for his cast. Fair exchange: After all, Wingard spent a long time slaughtering Swanberg in You're Next, so putting him through the wringer as a morally dubious and possibly murderous artist. In a small mercy, he at least lets Wingard bring his old film making partner Simon Barrett along for moral support.

Wingard seems game to let his obsessions/professionalism run amok. But it's Barrett who brings the most oddball fun to the exercise. Bridging the divergent aggressive weirdnesses of Quentin Dupeiux's Wrong and Twin Peaks-era David Lynch, with the overintensity of a Skinamax outing.

But then, it's hard to talk about the male gaze without showing the male gaze. Much like he used another director/actor, Ti West, in Silver Bullets to discuss horror obsession, this time it's a tale of opposites, with Wingard as the spirit of fantasy indulgence versus Barrett as the moral qualms of of reality.

And then there's the unspoken third character: Swanberg himself. Like much of his smaller works, (and after Drinking Buddies, that's how we have to talk now) this feels like him riffing on his own interests and those of his fellow filmmakers. The murder-mystery is really a side point. This is, like Silver Bullets, about the creative obsession, distilled to one beer-assisted conversation between Billy and Michael. Why death? Why nudity? Why not, as Michael asks dolefully, pretty flowers instead? There's no answers, but there's definitely something to consider.

24 Exposures (MPI) is out now on DVD. Also out this week:

How To Train Your Dragon (Dreamworks) With the sequel imminent, another chance to catch the Viking-tinged animation. When it hit theaters in 2010, Marjorie Baumgarten wrote, "The swarming dragon attacks may truly frighten the littlest viewers, but the depiction of the pleasures of flight and the conquering of one’s fears should make How to Train Your Dragon a perennial delight." For fans, the second volume of the spin-off series Dragons: Riders of Berk also gets a home release this week. Read our full review here.

Cheap Thrills (New Video Group) A SXSW smash and one of Drafthouse Film's most daring releases. Director E.L. Katz turns a simple night of drinking and dares into what Marc Savlov saw as indicting "the divisive nature of greed, and a creepy-funny broadside against capitalism itself." Another stand-out performance from Pat Healy (Compliance) re-united with his The Innkeepers star Sara Paxton, but the true surprises are powerhouse performances from Ethan Embry and David Koechner. Read our full review here, and our interview with Paxton, here

Sleepaway Camp (Shout Factory) By 1983, the slasher genre was getting pretty staid already. And then this madcap slab of deranged drama, complete with malevolent camp counsellors and the most shocking end to a horror since momma Voerhees made her exit, left audiences reeling in a real WTF resolution. Come back this weekend for our interview with director Robert Hiltzik.

The Color of Lies (Entertainment One) Claude Chabrol's 1999 murder mystery, originally titled Au Coeur du Mensonge, is generally regarded as one of the finer later works by the French New Wave pioneer.

House in the Alley (Shout! Factory) Supernatural horror afflicts a mourning couple in this Vietnamese chiller.

DVD, Joe Swanberg, Adam Wingard, Simon Barrett, Caroline White, 24 Exposures, Cheap Thrills, How to Train Your Dragon, The Color of Lies, The House in the Alley, Journey to the West, Sleepaway Camp