English VOD curio is the oddball that fits in 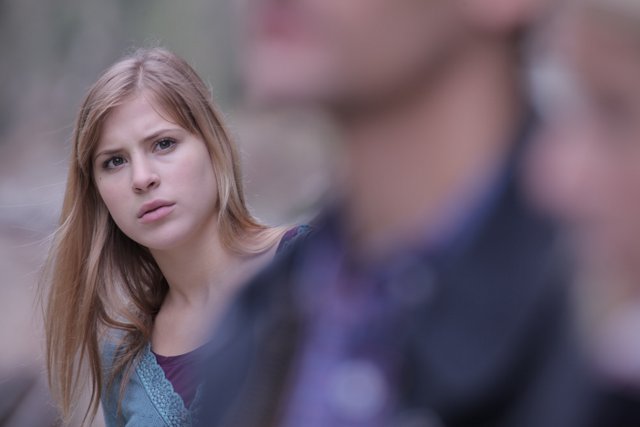 How old where you when you were first put in a box? The criteria that define you? And when did you first wonder, who set those criteria in the first place?

Part romance, part social allegory, British lo-fi sci-fi Frequencies (on VOD now) begins with two small children in a very prim and proper school. Each is assigned a number, and that number defines everything in their lives.

Those are their frequencies, and their nature is two fold. First, a definable number that every person is a given: A combination of IQ, luck, cosmic karma and social position. It's also the one minute per year that those two children can spend together without weird cosmic consequences.

Forwad a decade. "This is awful," proclaims privileged sociopath Marie (Eleanor Wyld) when she's forced to endure a moment of actual intimacy. The cause is Isaac-Newton Midgeley (Daniel Fraser), her total polar opposite. The universe goes out of its way to cause him trouble: He is a negative frequency, literally out of sync with the rest of the cosmos. Suitcases fall out of the sky on him, he's always the one stood in the rain. Marie, by contrast, finds the world reshaping itself to her whim. Trains always just arrive, there's always an open table at the restaurant. The downside? She is completely incapable of emotion, and instead simulates even the mildest pretenses of contact. That Zak, who has previously been her guinea pig on the ramifications of low-high frequency interactions, is the cause of any change in the natural order? That would cause her endless consternation if she really understood what that meant.

Perched deliriously between the blanched pain of Never Let Me Go and the high concept science fiction of Upstream Color, Frequencies adds an important element: Teen romance. Less overt and maybe more intellectually playful than last year's zombie rom com Warm Bodies, it dances between echoed plots, flitting between Marie and Zak's interactions as kids, teens, and adults. Each iteration and re-iteration rewrites the previous scene, and adds a bitter twist as everyone realizes they may be less in control of their destiny than they thought.

Writer/director Darren Paul Fisher (The Inbetweeners, Popcorn) doesn't delve too deep into the nebulous physics of the frequencies. Instead, he homes in on the philosophy and politics of them, using the interactions of Marie and Zak to take sly and charming stabs at issues of entitlement, inheritance and social status, before mounting a more somber discussion of free will. It's also a sly indictment, if one chooses to see it, of the ongoing fascination with standardized scores, and a hint that it's adversity, rather than advantage, that leads to real creativity. As much as it has gathered (and earned) comparisons to Eternal Sunshine of the Spotless Mind, there's a dose of Brazil in there too, especially when the men from the ministry turn up. After all, if frequencies aren't immutable, how will people know their proper stations in life?

But it's in its quirky romance that Frequencies is most elegantly delicious and saddening. Wylde and her younger versions (Georgia Minter-Brown and Lily Laight) are like a Russian nesting doll of self-possessed self-entitlement, brittle and bossy towards the unkempt Zak (Fraser, Dylan Llewellyn, and Charlie Rixon.) The "will they, won't they, should they, shan't they?" plot stares hard at the heart of love, but Fisher's story moves so briskly and delicately that it never becomes mournful.

What raises Fisher's script to the upper echelons of the current wave of intellectually challenging indie sci-fi (rubbing shoulders with films like the upcoming Coherence and The Signal) is that it truly weaves its concept into its nature. The idea of a cosmic frequency is arcane, going back to the music of the spheres, but the way he brings back old refrains to re-enforce that concept gives it fresh melody.

Frequencies is available on VOD and iTunes now.