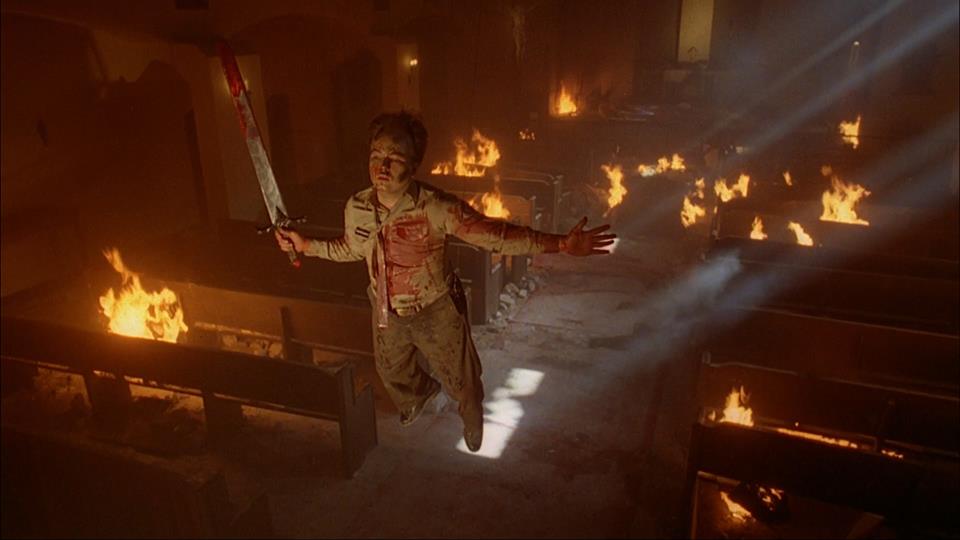 School's out! But before everyone packs away their pencils, it's a battle of the campus slaughterhouses in this week's home releases, as the mass murderer stalking Lanier Collage in Final Exam goes up against the demonic cult over at Evilspeak's West Andover Military Academy.

Evilspeak (1982) combines two of the great terrors of the 1980s: Satanism and technology. Stanley Coopersmith (Clint Howard) is the worst cadet at Andover, underneath which he finds the ruins of a satanic chapel. Turns out that ol' Andover was founded over the ruins of the tomb of Esteban, a defrocked priest exiled to America in the 17th century. So after Coopersmith summons Satan using Esteban's instructions for a Black Mass and the campus computer (no, really), it's demon pig madness as the wannabe military boy becomes the most inept devil's tool ever.

By contrast, Final Exam (1981) is a by-the-numbers 80s slasher. A faceless maniac is slicing and dicing his way across a series of college campuses, and finally washes up at Lanier, where there are the traditional ranks of nameless, faceless sorority and fraternity pledges to carve his way through.

But which school will make the top rankings of the most murderous educational institute?

Innovation: Coming at the middle of the first wave of slashers, Final Exam's unnamed killer was an oddity. Jason was a mutated survivor; Michael Myers was malicious troll from the womb; Cropsey was seeking revenge. But the killer was just that: A killer. There's no back story, no reason, he just turns up and starts killing, which is both a refreshing change and a slap in the genre face. Don't worry, because Evilspeak has enough back story for both of them. By incredibly complex technology that's arguably less realistic even than Hackers (look it up, kids) Esteban uses Coopersmith to become Internet Satan! This means some awesome 1980s proto-CGI (yes, you whippersnappers, they had computers then, and they didn't all operate on punch cards. Look them up, too.) This was the same year that Tom Hanks made role players facepalm hard with the after-school not-so-special Mazes and Monsters (watch out, parents! 10 sided dice will give your children the. Space! Madness!) so it's pretty clear that Hollywood wasn't fond of all these new diversions. Somewhere, there's still a producer having a World of Warcraft nightmare fever dream.

Mysterious Murderer: They say that clothes make the killer, but our college killer looks like he grabbed an ensemble from JC Penney's engineering department finest. He's possibly the least visually interesting maniac of the era (kudos for the early Anton Chigur haircut, though.) At least no one knows he is, unlike Esteban, who swoops around in Coopermsith's dream in a black robe, wielding a sword with a pentagram on it. As for motivation, he definitely wins out because, well, he is Internet Satan!

First Kill: Final Exam riproars into a high quality quarterback stabbing out at inspiration point at the five minute mark. It's kind of a rip-off of the opening scenes of Maniac, the classic late night make-out interrupted by murder, but it's pretty bloodless. Evilspeak goes straight for the jugular with a period decapitation by sword at around the same time code, but that's in broad daylight, so extra credit. 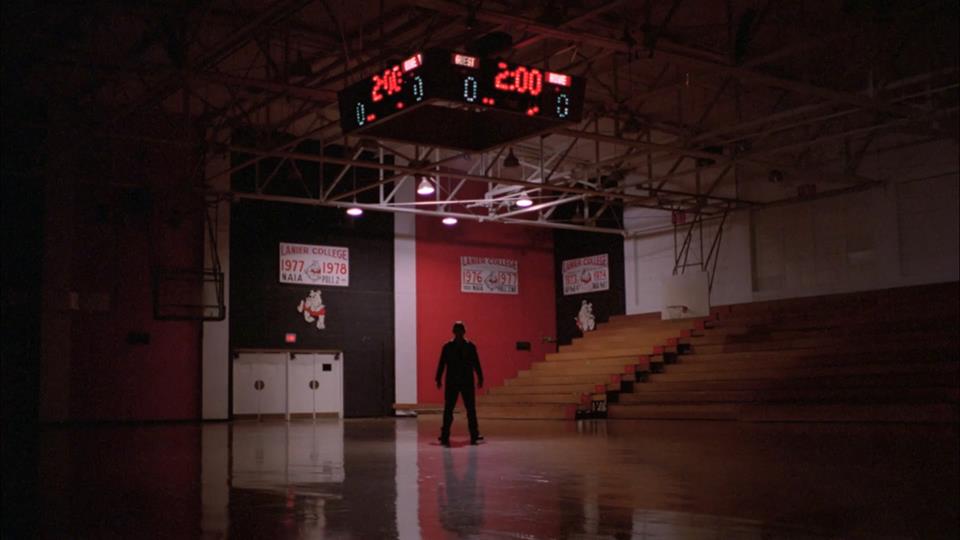 "Hello? Hello? Anyone there? Hey, I drove a long way to massacre a student body, and the least you can do is show up. Huh. Students today." Final Exam struggles for a passing grade.

Awesome Kills: Final Exam is a serious gore let-down (that said, it does pull off a couple of very impressive corpses stuffed into lockers.) Most of the murders are by (yawn) carving knife, although there's one interesting use of a weight lifting machine. What does Evilspeak have? Demon hogs. Oh yes. Plus, this is the restored 97 minute cut, so director Edwin Weston's grotesque original vision (severed heads! More severed heads! Wow, there really are a lot of severed heads in this film) is on screen in all its gruesome glory.

Final Girl: Ah, the old trope. There's a few contenders at Lanier, but the winner is pretty obvious from the start because Courtney (Cecile Bagdadi) seems to be wearing a Lori Strode wig. Doubly so, especially since killer x keeps pulling a low-grade The Shape imitation. There are fewer parts for women at the all-male Andover, and the most prominent female character, the secretary who get a little too excited when beatings are handed out to the boys, is clearly doomed.

Revenge of the Nerds: After the first senior slaying takes out a jock, it's pretty clear that Final Exam isn't aces for athletes. So it makes up for it with a double quotient of nerdery. Faintly nebbish Gamma frat pledge Gary (Terry W. Farren) tries, but his nerdishness extends to only being able to bench 300. He;s nothing compared to well-spoken Radish (Joel S. Rice, later a successful TV producer.) Not only is he on the far end of the 1980s geeky spectrum (he has a calculator AND a computer! Kill it, it must be Satan!), but he is also the smartest guy in the room. He gets to indulge in some of the best pre-Scream meta-conversations about real life killers, plus he has some great vintage movie posters (where did he get that awesome Corpse Grinder one-sheet?) and drinks Irish whisky (he would have got more points if it was Scotch, but we'll let that slide.) But can anything compare with the blissful casting of Howard as Coopersmith? This is Ron Howard's less photogenic brother (no, really) and playing Renfield to an undead priest is the least of his troubles. What's weird is that, somehow, he almost ends up sympathetic, even in the midst of bloody conjuration. Almost. C'mon, it is Clint Howard.

Obnoxious Oafs: It's college frat boys versus the worst the ROTC has to offer. Lanier's Gammas are supposed to be irredeemable because they're speed-dealing bullies. That said, Wildman (Ralph Brown in his sole credited role), the linebacker scumbag, is so spectacularly over the top (in a "we're clearly ripping of Bluto from Animal House" way) that he's oddly charming. Using deodorant as a breath freshener is a nice touch. The low grade villains of the military academy are just your stereotypical extras from TAPS. 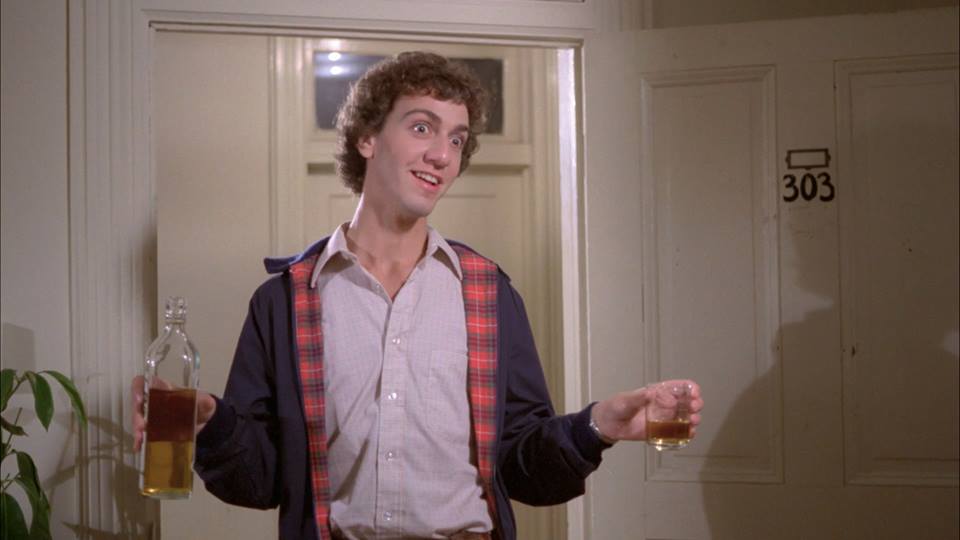 "Yup, of course I'm drinking. I'm the one who had a career after this!" Radish toasts taking his Final Exam.

Most idiotic prank: Less idiotic than ridiculously complex: The Lanier Gammas decide that it would be hilarious to simulate a terrorist attack just so their chief bully can cheat on a test. This seems like an abnormally high level of energy and time invested. Mostly all that Andover's wannabe officer corps can muster is to threaten to drop Coopersmith out of a window. But then, technically, they're the ones that comes close to complete the conjuration of Esteban, so their accidental prank is actually pretty impressive.

Authority Figure: Andover has a pecunious chief officer, a sex pest priest, bullying coach, and a surly, abusive old groundskeeper (aka a Scooby-Doo full house. Also, the clearly ex-Nazi Latin teacher is a particularly nice touch. However, when hillbilly sheriff (Sam Kilman) rides onto Lanier campus, he's a bigger threat than the killer. Imagine Joe Don Baker wiping the one single soliary tear he ever shed as his Strother Martin Memorial School of Law Enforcement, and this is is redneck, no-neck son he's celebrating: Rod Steiger's Police Chief Gillespie with a touch of evil. He's a glorious contrast to campus rent-a-cop Mitch, who is actually unintelligible (actual line: "You done bin treed, boy") and may be the reanimated corpse of Emil Sitka in Ernest Spends the Weekend at Bernie's.

Kills Per Hour: For much of its length, Final Exam is like a real final exam: The only fatalities come from the potential lost will to live. Characters disappear for whole acts (where exactly does the English teacher go?) and it's just because they wander off. But then the killer pulls a The Burning-esque massacre. Up until that point, it could easily have passed as a college comedy, and even the John Carpenter-aping score can't fix that. Evilspeak has a similar languor, but at least it has a sense of grim mood, assisted by easy but fun creeps and scares in Esteban's underground murder vault. Plus, sporadic demon pigs. And then when the hellish wheels come off, it earns its title as one of the most madcap bloodbaths of the era. Flying nails! Exploding crucifixes! Demon pigs! And yes. More decapitations.