The personal is political. Sexuality, doubly so. The Forbidden Film Festival launches tonight with a line up of films about a lot more than just who's putting what into or around what.

The festival is the fruit of the creative processes of Lyn Raridon, who only just finished wrangling the panties on the 2014 Texas Burlesque Festival. The celebration of sensual cinema begins tonight with a film that's as much about environmental crime as erotica. Legendary sex activist, theorist and Texas Burlesque Festival 2011 star Annie Sprinkle and director Beth Stephens will be skyping in for a special screening of Goodbye Gauley Mountain: An Ecosexual Love Story, the story of their fight against mountain top removal. Following the naked footsteps of the eco-porn activist of SXSW 2013 documentary Fuck for Forest, their film contrasts the emotional and physical connections people feel with each other with the abusive relationship that the coal industry has struck up with the ridgetops of West Virginia.

That's the beginning of three days of exotica, erotica, sexuality and good old fashioned gleeful smut, continuing tomorrow with The Banned Show!. That's a double bill of underground queer classics, starting with Kenneth Anger’s 1947 Fireworks, tag-teaming with Jack Smith’s 1963 Flaming Creatures. Both movies had brushes with being dubbed obscene, but both are landmark movies in the battle over censorship. Fireworks is arguably Anger's first work dealing directly and explicitly with homosexuality, and the final ruling in Supreme Court of California that it was art, not obscene, was a legal landmark (Anger himself simply said that "this flick is all I have to say about being 17, the United States Navy, American Christmas and the fourth of July.") Meanwhile Smith's experimental film got on the wrong side of the New York Criminal Court, and was actually used to attempt to derail a Supreme Court nomination. In 1965, anti-pornography activists Citizens for Decent Literature dispatched legal counsel James Clancy to show it to US Senators. He argued this was exactly the kind of filth that respected jurist Abe Fortas said was acceptable (won't someone think of the children!) and so they should block his nomination to become an Associate Justice (the upper chamber politely disagreed with Clancy.)

The Forbidden Film Fest runs May 7-9 at the Vortex and the Butterfly Bar, 2307 Manor. www.forbiddenfilmfest.com More info on the opening night film at www.goodbyegauleymountain.org. 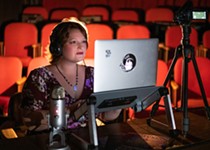