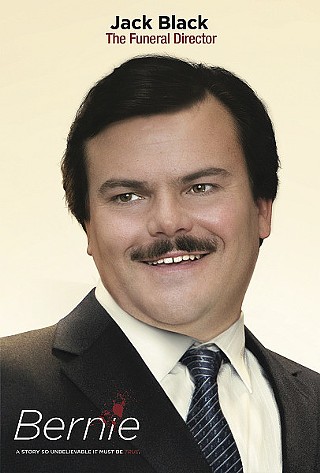 Jack Black in a poster from the 2012 film Bernie

Bernie's third-act twist, The Lizzie Project's anti-bullying crusade, and more in this edition of Film Flam.

• Yesterday, a judge released on bond Bernie Tiede, the convicted killer whose story inspired an essential-reading Texas Monthly article by Skip Hollandsworth and then Richard Linklater’s 2012 film Bernie. Tiede, a former mortician, had been serving a life sentence for the murder of his friend and benefactor, 81-year-old Marjorie Nugent, in 1996, but new evidence regarding sexual abuse Tiede suffered as a child prompted another look at the case. In an interesting twist, part of the conditions of Tiede’s release include him living in an Austin apartment provided by Linklater, who testified on Tiede’s behalf.

• ATX Television Festival continues to drop new programming for its June fest, including an opening night presentation of new TNT series Legends, based on the book by Robert Littell and starring Sean Bean as an undercover FBI agent. The spy drama premieres Aug. 13 on TNT. ATX Fest also announced that for the first time, it’s making single tickets available to select events at the State Theater, including the Everwood reunion (now with show creator Greg Berlanti in attendance), Hey Dude reunion, and award presentation for Henry Winkler. Find out more here.

• Tickets are still available for the Council on At-Risk Youth’s Distinguished Speaker Benefit Dinner tonight featuring Piper Kerman, author of the bestselling prison memoir Orange Is the New Black, which inspired the super-bingeable Netflix series of the same name. And on the subject of the latter: Netflix has ordered a third season of the show; the second season debuts June 6.

• Filmmakers are seeking Kickstarter support for their upcoming documentary The Lizzie Project, about the Austin-based motivational speaker Lizzie Velasquez, whose talk “How Do you Define Yourself?” at December’s TEDxAustin Women conference became a YouTube sensation. Allow Lizzie to introduce herself, her anti-bullying mission, and the film below. The fundraising campaign ends May 31.