'Game of Thrones’ complex consideration of freedom and slavery

In modern popular culture, the depiction of slavery usually involves stories set in the Deep South. The fantasy genre is not the place where one would expect to see it explored, but on HBO's Game of Thrones, slavery has become a driving force not only for the ongoing and multivarious plotlines, but as another front in the battle between good and evil. 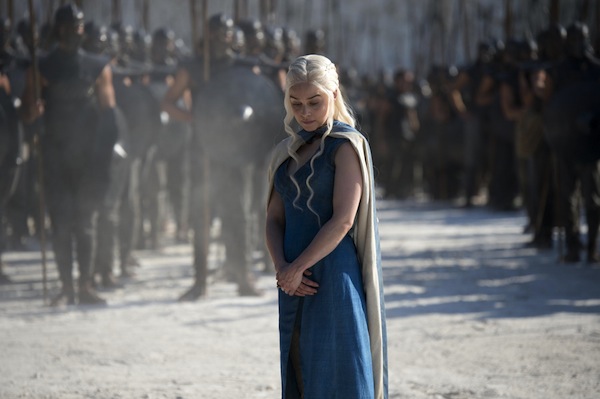 Emilia Clarke as Daenerys (photo by Macall B. Polay/courtesy of HBO)

As an aspirant to the throne – one among many in this series – Daenerys Targaryen (played forcefully by Emilia Clarke) started behind the eightball. The eventual Mother of Dragons not only saw most of her family slaughtered and the rest kicked out of their homeland, but she began her quest for the crown with no army at all. Throughout the show’s first three seasons, she went about the business of not only collecting soldiers but confronting a system of slavery so entrenched that its geographic center is called Slaver's Bay.

Freeing slaves and turning them into loyal subjects is certainly helpful in her ultimate goal of becoming queen, but Daenerys has been going about this task with a righteous fire that shows no signs of abating. She’s now on her third conquest, sacking the city and freeing slaves with a fervent zeal. She has become her world's most accomplished and effective abolitionist, inflicting pain on the masters while breaking the chains of those they enslave.

Beyond the practical utility of army-building, why has Daenerys taking on this mission? It surely starts with the social mores of her home. In Westeros, slavery is forbidden, something of a point of pride for this monarchical people. That doesn't mean it’s a paradise. Far from it, but ideas like loyalty and courage are admired, and every man is ostensibly free. (Women, however, have been dealt a more complicated hand.)

While the powers that be consider themselves enlightened in this regard, there is a group that would dispute this alleged freedom. North of the Wall, in the coldest reaches of Westeros, live the wildings. That's not how they refer to themselves; in their world they are Free Folk, free from the need to "bend the knee" to any lord or king. This group sees the structure of the larger south as inherently beholden through its fealty to the monarchy. What is considered de rigueur to the larger society looks like slavery to the Free Folk. The Wall, however, keeps them segregated in an inhospitable clime – free but frozen, with resentment to spare.

The women of the kingdom would also have something to say about freedom as well. While a poor wildling woman such as Ygritte takes pride in her freedom, even a powerful woman south of the Wall has very little of it. Take Cersei, for example. She has been queen, queen regent (mother of the king), and most importantly, daughter of Tywin, the person actually running things in King’s Landing. But even this lofty lady is at the whim of those around her. When her father wants her remarried in the name of political expediency, she can say nothing. When her only daughter is shipped off to live with a rival family as a sort of guest-hostage, she can only cry as the ship leaves the dock. Whether it’s Sansa under virtual house arrest in the Eyrie, or Arya as a piece of luggage to accompany the Hound on his travels, the women of Westeros are ensnared in de facto slavery they can do nothing about. 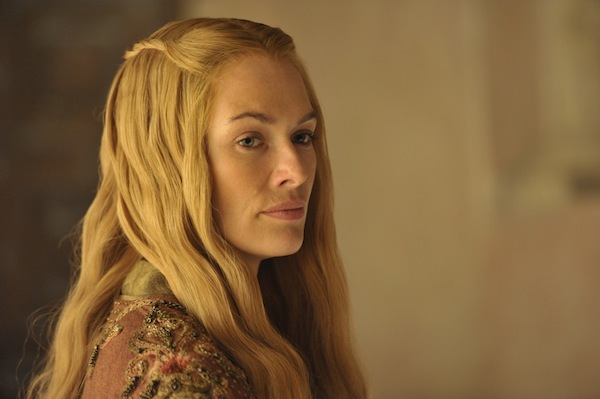 Lena Headey as Cersei (photo by Neil Davidson/courtesy of HBO)

Back across the Narrow Sea, there's a simpler rationale for the actions of Daenerys: She finds slavery abhorrent. It’s not hard to denounce the practice of slavery, and she has in the most visceral of ways. Maybe this outlook started with her upbringing across the water, but it might have started with her own circumstances. Before he was killed in a most visually stunning way, her brother Viserys effectively sold her into slavery through an arranged marriage to a brutal warrior prince, Khal Drogo. She had so little choice in the matter, that once she came into her own, she now fights for those unable to fight for themselves. This is an admirable choice in a world bereft of such actions, especially when juxtaposed with the situation of the women back home.

The idea of a lily-white foreigner traipsing around a land full of brown-skinned people, wielding a sword of righteous freedom, is problematic for a modern audience. Beyond our American context, the British accents of the characters give a nod to an English state that once ruled half the world, most of it resulting in the oppression of indigenous peoples. But the world of Game of Thrones is not our world. George R.R. Martin and his television partners have not made race an issue. Groups are certainly pitted against each other, but it's usually the result of geography and loyalty, not skin color. The masters appear to have as much pigment in their skin as their servants, making slavery a pure power dynamic with clear winners and losers. The audience can't help but take our context and put it on Game of Thrones, but 12 Years a Slave and Django Unchained are not all that useful in deciphering a show with fire-breathing dragons and talking trees.

A more interesting angle on this comes from looking at gender. Viewers got a taste of how that could go wrong at the end of last season. After freeing the slaves of Yunkai, Daenerys basks in their adoration amid shouts of “Mhysa!” (the local word for mother). This might not be an oppressive patriarchy, but is it a condescending matriarchy? Are these now-former slaves free people or children beholden to a new authority figure? These are questions worth asking as she overtakes yet another city. 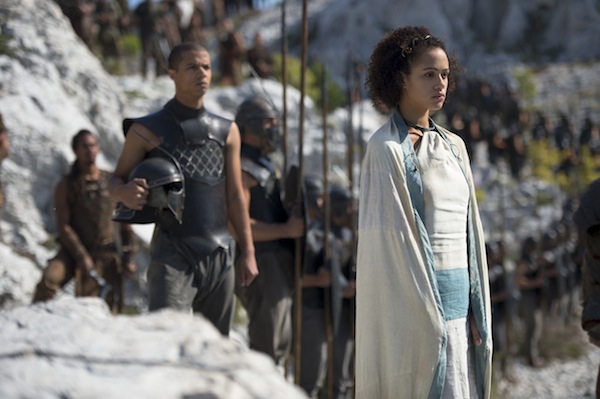 Nathalie Emmanuel as Missandei, a freed slave and translator for Daenerys, and Jacob Anderson as Grey Worm, leader of the Unsullied army (photo by Macall B. Polay/courtesy of HBO)

Even with Daenerys continuing her abolitionist ways, recent events have thrown a wrinkle into her plans. On last Sunday’s episode, "First of His Name," the complexities of such an endeavor became evident. Daenerys is informed that the two previous cities she has overtaken and freed have fallen back into less-noble hands. Leaving a city in the charge of a group of former slaves without proper resources doesn't appear to be a formula for success.

Daenerys is undeterred: "I will not let those I have freed slide back into chains." She decides to postpone her military adventure back to her homeland in order to stay in her current city of Meereen and rule, a practice run for a queenship she hopes to continue in Westeros. There are no easy answers in the world of suffering and retribution, but with this decision, Daenerys – mother of dragons, fount of inspiration – has taken a crucial step away from talk and toward action. It'll be interesting to see if the day-to-day realities of ruling will change the revolutionary and generous spirit that has drawn so many followers to her, both in her adopted land and in the viewing audience.