Paul Stekler named Mentor of the Year, and other film news 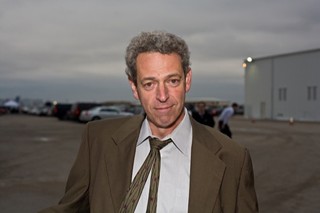 • Paul Stekler, chairman of UT’s Department of Radio-Television-Film, has been named as the 2014 Mentor of the Year by the trade magazine Variety.

The Emmy and Peabody Award-winning filmmaker and professor has served as the chief advisor and cheerleader for a host of student documentary film projects that have also gone on to win awards and distribution. Moreover, under Stekler’s tenure, Austin has developed into a recognized hotbed of documentary filmmaking. We concur most whole-heartedly with Variety’s choice.

• And speaking of awards and UT’s Radio-Television-Film department, kudos to Elizabeth Chatelain, whose thesis film “My Sister Sarah,” has been named one of nine finalists in the documentary category for the Student Academy Awards competition run by the Academy of Motion Picture Arts & Sciences. She is one of 51 students internationally to receive a nomination. “My Sister Sarah” documents the recovery of a meth addict in Fargo, ND.

The Austin Film Society is seeking qualified applicants for three open positions, and has also issued a call for summer interns. The jobs include director of marketing, development coordinator, and Office Coordinator. Job descriptions and application info are available on their website.

• The American Genre Film Archive – the nonprofit film-preservation initiative whose founding members include the Alamo Drafthouse founders Tim and Karrie League, and counts the filmmakers, Nicholas Winding-Refn and Paul Thomas Anderson as board members – has undertaken an IndieGoGo campaign to restore the last known surviving 35mm print of The Astrologer.

• An open casting call for My All American, a film being shot this May through July in Austin, Dallas. and San Antonio, has been announced. The film will be directed by Angelo Pizzo, the writer and producer of Rudy and Hoosiers, and tells the story of former University of Texas football player Freddie Steinmark and the National Championship Texas team of 1969. Lots of background extras are needed, including students (ages 18-26), coaches, parents and grandparents, cheerleaders, sideline football players, and people with vehicles from late Sixties. Show up on Saturday, May 10, between 11am to 5pm, at the Best Western at 2200 S. I-35> Contact Brock/Allen Casting at 512/992-1956 with questions.

• Cine Las Americas International Film Festival announced its winning films last week: They include Mateo for Best Narrative Feature and La Despedida for a Special Jury Award for Best Comedy. The Jury Award for Best Documentary Feature went to Roque Dalton, ¡Fusilemos la Noche! The jury named “Padre” as the Best Narrative Short. and awarded “Rojo” an honorable mention; the Best Documentarry Short went to “Trazos en la Cumbre” and honored “Nadie Especial an honorable mention for cinematography. The Texas Archive of the Moving Image Hecho en Tejas Jury Award was given to LaDonna Harris: Indian 101. (It will screen again locally on May 13 as the next entry in the AFS Doc Nights series.) The Audience Awards again recognized Mateo as the Best Narrative Feature, while the Documentary Feature Award went to Sigo Siendo. Micha received the Hecho en Tejas Audience Award, and the Audience Award for Emergencia Youth Film Competition went to “The Hearing.” Congratulations to all the winners and to the festival on successfully completing its 17th annual event.

• Richard Linklater’s eagerly awaited film Boyhood, which won top prizes at Berlin and SXSW, has released its first Trailer. It’s scheduled for a New York/L.A. premiere on July 11 and is scheduled to open in Austin a week later on July 18.