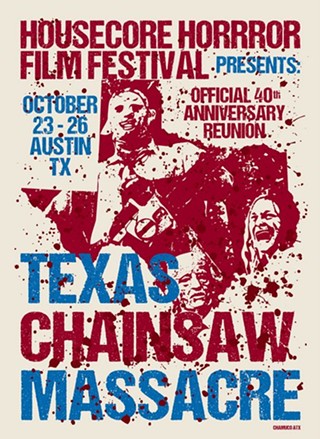 The wait is over: The Housecore Horror Film Festival has finally announced its headlining movie, and we can already smell the diesel. This October, the Austin metal and horror festival will host the official 40th anniversary cast reunion of The Texas Chain Saw Massacre.

Of course. Where else could it be? The genre-defining horror movie, a masterpiece of psychological and visceral terror, was shot just outside of Austin by a bunch of UT students and graduates. Now, four decades after its October 1974 opening, Austin's celebration of all things gruesome will bring the bloody crew back together. Celebrating the announcement, star Marilyn Burns said, "I am looking forward to the 40th year reunion in Austin where it all began! Who would have ever imagined TXCM is still going strong?"

The weekend brings together every surviving cast member, starting with the poor doomed youths on their road trip to hell: Teri McMinn, who played the ill-fated Pam; Allen Danziger and William Vail as the equally grave-bound Jerry and Kirk; And of course Burns, the film's reigning scream queen, whose terrified screams as Sally Hardesty still give audiences the tremors. Then there's the forces of evil, starting with the irrepressible Ed Neal, aka the hitchhiker; John Dugan, who played the decript old Grandpa; and of course Gunnar Hansen, the original Leatherface. Hell, Housecore even found Ed Guinn, famous as the truck driver who puts a wrench in Leatherface's plans and right in the middle of his forehead too.

Of course, few people are more thrilled about this than festival co-organizer Phil Anselmo. The metal god, former Pantera vocalist, and founding member of Down, Stoner God, Philip H. Anselmo and the Illegals and a thousand more, is an infamous horror fan (as co-founder Corey Mitchell explained, the festival is just like an extension of a night in Anselmo's living room.) Anselmo said, "Texas Chain Saw Massacre is such an incredibly important film, not just horror film, and to have all of these amazing people come to Housecore Horror and share this incredible anniversary with me and all of our friends is simply mind-blowing!"

It's not going to just be one screening. The cast will be there all weekend, and Mitchell promises "extensive panels" on the history, making and impact of the film. Plus, there will be more Saw-related films in the mix.

As for Mitchell, he gave all the credit for the Chain Saw reunion to Nic Brown, one of the festival's staffers. Mitchell said, "It was almost like the conversation I had last year with Philip, where we were on the phone, dreaming about what could we do for the film festival. I go, 'Philip, what do you think about getting Goblin in to do the live soundtrack to Suspiria?' 'Yeah, dude, that's fantastic, let's do it!' Then we chuckle and laugh, ah, yeah, that'll never happen, and then a week later I'm on the phone with Maurizio (Guarini, keyboards), and then we had Goblin. This year, it was a similar situation between Nic and I, because we're always looking at the calendar for what film anniversaries are coming up that we can possibly screen. Of course, top of the list was Texas Chain Saw Massacre, and Nic knows a lot of the people involved. So I sent him on a tour, and he nailed it."

Mitchell doesn't remember exactly when he first saw Chain Saw, but he does remember where: The Telephone Road Drive-In, five minutes from his childhood home in Pearland. Actually, he saw most of it: It was part of a double bill with a PG feature, and when the saw started roaring, his parents peeled out. "Then 78, 79, we got a JVC VCR, it was like a thousand bucks," he recalled, and he started renting tapes from Big Boys Toys. "I went in and convinced the owner to rent me the movie, because I'd go in an talk about horror films like it was nothing. So he went, 'OK, this is really bad, don't let your parents see it. I took it home and freaked out."

The addition of the Saw kill crew only adds to the anticipation about the festival. Mitchell said, "Every time Phil he goes out or if he's doing an interview or he's playing or just going to see another band, everyone asks him about Housecore Horror Film Fest. 'Are you gonna do it again? Are you gonna do it again?' He tells them, 'Fuck yeah.' He's just really pumped about how the first year went off."

This is just the first of many waves of programming to come, and it's not just more movie guests. Mitchell is still putting together a music line-up to match last year's headliners of Goblin, Gwar, Down, The Melvins, and more. The specifics are still all wrapped up like a mummy, but safe to say that the mix of classic and contemporary extreme metal may see an industrial injection this year.

That's all part of keeping the scares and the roars fresh. Mitchell said, "I liken it to a sequel. This is Housecore II. Unfortunately," he concedes, "the vast majority of sequels suck." But with the team he's assembled, and the big name announcements still bubbling in the cauldron, he thinks he knows how to avoid sequelitis. "You take enough elements from the original, and then add enough of an original flavor to make it entertaining and expand the mythology. Make a better monster, make it more horrific, and I think that's what we're going to do."