Talking About 'My Generation' at ATX Television Festival

"What did you do in 2002?" "Eh, hung out on the porch with a tall boy." ATX Television Festival reunites My Generation.

If you don't remember the 2000s, there's always ABC's Austin-centric mockumentary My Generation to remind you. And if you missed My Generation, then luckily the ATX Television Festival is on hand to re-run the experience.

Since its debut in 2012, the festival has celebrated the prematurely cancelled, from pivotal works like My So-Called Life to overlooked gems like Love Monkey. Now it's time to binge watch My Generation, the millennial faux-documentary about surviving the first decade of the 21st century.

Originally titled Generation Y, ABC pulled the plug on the the Austin-shot after only two of its eight episodes were screened, and the rest made it online. So for fans of the series, the ATX fest crew have announced that they'll be reassembling one of the show's romantic sub-plots, with Daniella Alonso (who played overachieving Congressional staffer Brenda) and Julian Morris (Brenda's lost love Anders) in attendance, plus writer/producer Noah Hawley, who will be in town to discuss his newest show, FX's series adaptation of Fargo.

It's another slot filled in the festival's already bulging schedule. It seems like just yesterday (well, technically it was Tuesday) that ATX announced the Fargo screening, plus a preview of Guillermo del Toro's The Strain, and a Roswell cast and crew reunion. That's on top of the already announced Archer, Bates Motel and Justified events, plus a chance to become one of the growing audience that realizes that Orphan Black is one of the most underrated shows on TV today. 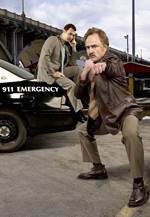