Trail of Crumbs Down Memory Lane: 'Pioneers of Television'

Season four debuts tonight on KLRU with 'Standup to Sitcom' 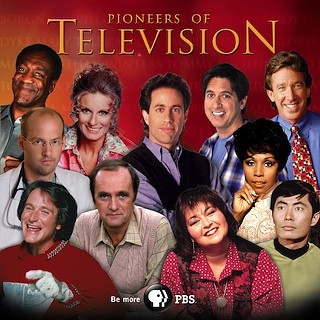 The fourth season of the Emmy-nominated documentary series Pioneers of Television returns to PBS tonight with a new slate of topics, ranging from the beloved doctors and nurses who have graced our television screens to a new look at comedy. This season looks at television comedy a few ways, this time, in two episodes.

It used to be that a shot on The Tonight Show Starring Johnny Carson was the living dream of struggling comics. Part of the reason was that beginning in the 1960s there was a hungry demand for nightly entertainment content, which was about the time Americans realized they enjoyed a favorite standup comic set in situations that, in the 1950s, usually reflected family life and, by the 1960s, included comedy westerns (F Troop, 1965-67), variety shows (The Carol Burnett Show, 1967-78), and even wartime comedy (Hogan's Heroes, 1965-71; M*A*S*H, 1972-83). The sitcom was born.

"Standup to Sitcom," the first episode of the new season, takes a fresh look at the late 1970s and on, in which we meander down memory lane first with Bob Newhart (The Bob Newhart Show, 1972-78; Newhart, 1982-90). Newhart was a comic who gained fame with the release of his first LP, and then went on to become a familiar pillar of sanity in a world gone mad in two consecutive series.

Bill Cosby, however, is the man who made the comic LP an occasion. If you were around at the time you'll remember usually self-possessed people scrambling for position at the record player and shushing everyone, because we were in church. Cosby went on to create an institution in American television, The Cosby Show (1984-92), in which an affluent African American family featuring two professional parents presented everyday family problems in a new way than had poverty- or class-coms like Good Times (1974-79) and The Jeffersons (1975-85). And in terms of changing stereotypes, Roseanne Barr (Roseanne, 1988-97) set a new metric in standup with her deadpan "Domestic Goddess" routines ("You look up one day, and realize you're married to a couch that burps"), which was perfect for television. There is no question that her show went on to influence family life and open dialogue about issues like gender identification as Darlene (Sara Gilbert), for example, struggles with puberty. Roseanne today says, "Yeah, I blazed a trail, too. I made it wider."

Jerry Seinfeld (Seinfeld, 1989-98) shows us some great shots of a young Larry David, and gives him the bulk of credit for the show's success. He still swears when NBC called him in he had "nothing", and that "nothing" provided a theme that never went away. The show is credited with adding new meaning to the vernacular with terms like "shrinkage," "re-gifted," and "yada yada yada." Ray Romano (Everybody Loves Raymond, 1995-2005), who personified the well-meaning goofball, was saved by David Letterman's World Wide Pants with a TV offer, and Tim Allen went from performing for Goodyear executives to being a weekly institution with Home Improvement (1991-99).

All of these figures clearly have hilarious yet perilous stories of their beginnings. They started from the bottom – doing standup at open mics, making it on to bills under headliners, and eventually finding fame on some of our all-time favorite shows. In some unexpected treats from the vaults we see a sequence from The Burns and Allen Show (1950-58), the result of many nights on the vaudeville circuit and success on radio of husband and wife team George Burns and Gracie Allen, arguably more beloved figures in husband/wife comedy than Lucy and Desi. Footage of Jack Benny is another surprise, and indeed, he is probably the unofficial godfather of standup comics making it on television.

Second episode "Doctors and Nurses" (Tue., April 22) reminds us of not only of George Clooney's first blush as Dr. Doug Ross on ER (1994-2009), but features a final interview with this writer's first crush on television medical personnel, Chad Everett (Medical Center, 1969-76). His dazzling smile and assured bedside manner belied some of the double entendres we were too young to understand, and we were in any case smitten. Other appearances include those by Noah Wylie and Anthony Edwards discussing the phenomenon that was ER (1994-2009); and Howie Mandel and Ed Begley Jr. discussing St. Elsewhere (1982-88).

Third episode, "Breaking Barriers," (Tue., April 29) finally addresses race issues in television, which were touched on briefly in a third-season episode that discussed early women of color, like the legendary Moms Mabley, who wasn't booked on The Ed Sullivan Show (1948-71) until 1961; and Marla Gibbs's casting as Florence, the maid, on The Jeffersons after years of scant work. This episode features the mid-1960s breakthrough of Diahann Carroll as Julia (1968-71); Bill Cosby, once again, this time for his work on I Spy (1965-68); Latino trailblazers Desi Arnaz and Edward James Olmos (Miami Vice, 1984-89); and George Takei (Star Trek, 1966-69), an early ambassador for the Asian presence on American television.

Final episode "Acting Funny" (Tue., May 6) attempts that often tricky but irresistible urge to peek behind the curtain at technique. Featuring the mania of Robin Williams (Mork & Mindy, 1978-82) and his rainbow suspenders that, as the era required, pulled his pants up to get that other comedic necessity of the male comic, obvious anatomy. It certainly kept Pam Dawber interested. Williams' comic muse is said to be Jonathan Winters, who had been a television mainstay since appearing on The Bob Hope Show in 1966, Twilight Zone in 1961, and countless other shows.

Pioneers of Television: "Standup To Sitcom" airs tonight (4/15), 7pm, on KLRU. Episodes continue Tuesdays into May.

Thanks for the Memories: ‘The Pioneers of Television’
Season 3 debuts tonight on KLRU with focus on ‘Funny Ladies’