Getting Schooled by Jake Busey on 'From Dusk Till Dawn'

The show's own Basil Exposition delves into the snake cult myths 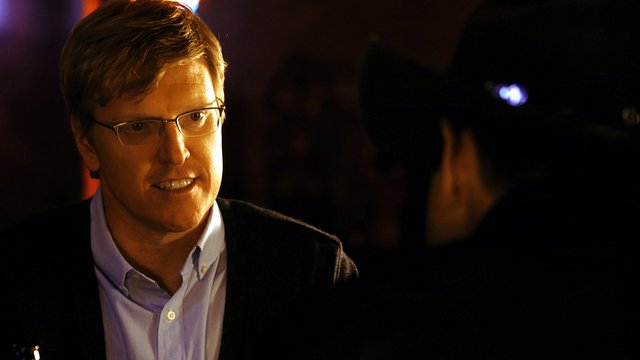 "Tanner has his own agenda. For him, the ranger coming to ask him questions gave him a lot of information that he didn't have. It's a one hand washes the other for him, but the ranger has no idea." Jake Busey on From Dusk Till Dawn's own Basil Exposition, Professor Tanner. (Image courtesy of El Rey Network)

If knowledge is power, then in From Dusk Till Dawn, that would make Professor Tanner, played by Jake Busey, the most dangerous man in the room. "I love being the information guy," he said. "I'm a combination of Basil Exposition and Indiana Jones in the classroom."

From Dusk's audience was introduced to Tanner in episode three, Mistress, as he explained the meaning of the eye symbol and the mystic roots of the Cartel Killer to Ranger Gonzalez (Jesse Garcia.) Tonight the wired, weird and all together too-clued-in researcher returns for episode six, Place of Dead Roads. It's been his job to tie together the seemingly loose and disparate end, from the series' opening flashback to an ancient snake-god ritual, to the supernatural visions that plague and guide Richie Gecko (Zane Holtz) Busey said, "It's fun to be the guy who keeps the audience abreast. I'm the tracks that keep the train on the road."

But he's not just a passive figure doling out research. What we'll soon learn, Busey said, is that "Professor Tanner has his own agenda. For him, the ranger coming to ask him questions gave him a lot of information that he didn't have. It's a one hand washes the other for him, but the ranger has no idea."

Tanner's a change of pace from what people may expect from Busey. His early career, in high-octane adventurers like Starship Troopers and The Frighteners, is far removed from the cerebral, manipulative Tanner. "I'm grateful for Robert (Rodriguez) for hiring me when I couldn't get high quality parts because I'd been away for a while."

When creator/director Rodriguez first pitched the TV adaptation of his 1995 movie, said he wanted to explore the Meso-American mythology behind the film's vampires. That makes Tanner is arguably one of the most important additions to the show. Busey said, "This is the real shit, unlike True Blood or The Walking Dead, the stuff that we are presenting is all straight from history books, and it's fascinating for me." As a university researcher, Tanner is the fact-spouting deus ex, but Busey didn't want him to be a lampoon of the cobweb-covered fusty academic. He said, "We wanted to make sure that professor Tanner was authentic to people in that field, with a respectful, tasteful representation of who he is."

That meant putting in some research time of his own. While he admits he wasn't "a native Central American mythology expert" before the show, "once I got the role, I was keen to learn as much as I could. The prop guys had acquired these codices and and I read through the stories that run parallel to what we do."

While the academic texts were "very academic and very non, what's the word, interesting?" Busey said, it gave him an insight into a time when mortals truly feared their gods. "The people who wrote those hieroglyphs on the wall had a different perspective on things." He compares their acts of human sacrifice to suicide bombers "I just can't relate to that personally, but these Mayan people believed that if you sacrificed people to snakes, then it would allow you to elevate to another layer of being, to be telepathic, the power to see through other people's eyes from a thousand miles away. They believed you could time travel through sacrificing people."

That also makes Tanner vital in explain exactly what's happening to Richie. In the film, Quentin Tarantino portrayed the younger Gecko as a gun-happy sociopath. But for the TV series (which Busey calls "the novel version of the short story"), Holtz has turned him into a dark conduit to the nether world, with the implication that he's set for a much more grandious fate than lunch for a vampire. Busey has nothing but praise for Holtz, saying, "This is going to launch him to somewhere he's never been. I could see him being in the next Marvel film, the next big screen success. He's amazing."

As fast as he is to praise, Busey's also quick to defend his fellow cast members, especially those that face the extra pressure of filling roles that were defined in the original film by other actors. "To come back and smell like a rose is very hard, because people are very quick to judge," he said, "Zane has taken the part in a different direction. Whereas DJ (Cotrona) is getting slammed because 'his impression of Clooney is less than satisfying,' and I thought, "what? He's not doing an impression."

With Tanner being a completely new creation for the show, at least that pressure's off Busey. "I haven't got any shoes to fill," he said, "but then I don't know when I'm going to be killed off." Then again, considering the show's switchback, flashback narrative, and the fact it already has snake gods, a seemingly immortal seductress, and at least one ghost so far, dead may not be contractually binding in this show. Busey laughed. "True true true."

From Dusk Till Dawn episode 1.6, Place of Dead Roads, debuts tonight, April 15, on the El Rey Network at 8pm Central. For more on the show, read our set visit report with Zane Holtz and Robert Rodriguez, and our interview with director Eduardo Sanchez.