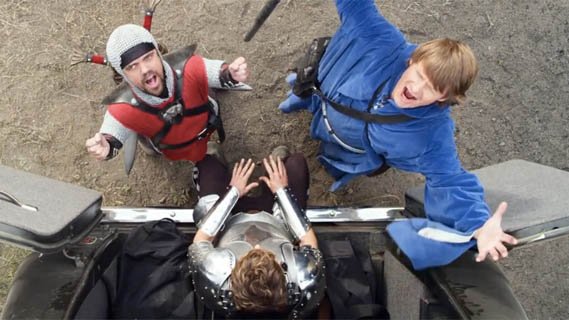 "Finally, the Knights of Badassdom are unleashed!" "Er, guys, it's not the director's cut." "Nooooooooooooo!"

Most cult films become cult films. But once in a while film arrives, a film foretold with ill-augur, that has the dedication, fascination and weirdo subject matter that pushes it into cult status. And that film is Knights of Badassdom.

Joe (Kwanten) is an under-achieving automechanic and aspiring doom metal guitarist who gets dumped by his girlfriend (Margarita Levieva from ABC's Revenge.) It's up to his best friend Eric (Steve Zahn, who seemingly stole Dorian Gray's picture) to get him out of his slump, and he does it the only way he knows how: Get Joe drunk and stoned, dress him in battle armor, and kidnap him for a weekend of barbarians, nights and mystical battles.

That is, until they accidentally unleash a demon that happens to model its corporeal form on Joe's ex, and starts ripping body parts off other LARPers. Can our mighty heroes dispatch this unholy beast back to the netherworld? Will their friend Hung (Dinklage) share his 'shrooms? And will Ronny the game master (Jimmi Simpson, best known as the odious Liam McPoyle from It's Always Sunny in Philadelphia) stop being such a massive dick, just because Joe gave his character magical syphilis in a game of D&D years ago?

All the Lynch trademarks are there: Metal, gore, schlubby guys with insanely hot girlfriends (there's even an extra called "Summer Glau Hottie Montage" on the disc) and an 80s comedy sensibility. Plus it's about one of the great oddball hobbies, LARPing. And no, I'm not going to defend grown people running around in the woods, wearing home made armor and hitting each other with foam swords. Because, as the title explicitly states, LARPing is bad ass. It builds community, people learn practical skills like metal working and leather crafting, and … oh, just go watch the great LARPing doc Darkon, which was one of Lynch's inspirations while filming.

Lynch isn't a LARPer himself, but as a horror obsessive he gets the instincts that drive people to really commit to a hobby. While there's a lot of "thee, thou and art thou" dialogue jokes, he's in on the humor, rather than poking mean-spirited fun (cough*The Big Bang Theory*cough.) The end result is as effortlessly and heartwarmingly geeky as Community.

Here's where the wheels fall off the tumbril. Knights has been in the "where are they now?" file since getting a rapturous response at San Diego Comic-Con International in 2011. It's a long, sad, sorry story, but the gist is that production house IndieVest booted Lynch off his own film . When the news came out, Lynch launched the #NotMyCut Twitter campaign to point out that this was not his vision (to this day, his Twitter feed @TheJoeLynch refers only to "Knights of Badassdom (Dir. Cut.)" He's pretty much ignored this DVD release, finishing off filming on his new film with Selma Hayek, Everly, and getting rave reviews for his unofficial Marvel short Truth in Journalism, starring Kwanten as Eddie Brock aka Spider-Man villain Venom. He's pretty much disowned this movie, so it's weird to talk about a film when the director is still saying 'nope.'

Time to relax a bit: Knights is funny. But is it Lynch's funny, or IndieVest's funny? It's longer than the rumored 70 minute producer cut, but shorter than Lynch's version (as recently as January he was telling Moon director Duncan Jones "#notmycut"), so who knows who finally had their fingers in this pie? And this is where it gets morally complex. Films are a collaborative process, and sometimes that just comes down to to one person getting to shove everyone else out of the way. Sometimes it's the director, and some times it's the producer.

It's also Lynch from half a decade ago (the interview included has a clean cut, baby-faced Lynch that clearly shows its age) so this is just an oddity all over. It's a little sad that his career and the film itself for the last few years has been overshadowed by this weird process. Fortunately, what filled the gap between Knight's announcement and its long overdue release has been Holliston, Lynch's collaboration with his old friend Adam Green (Hatchet, Frozen.) 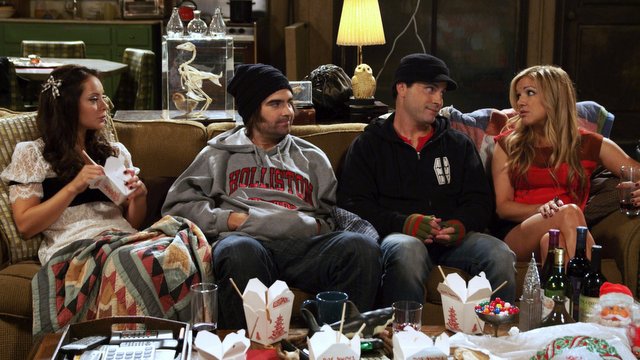 One of cable network Fearnet's first wave of original programming, Holliston is basically one delicious in-joke for horror fans, and the residents of Massachusetts. Unless you live in Framingham, which is the constant butt of every joke, but then there's a lot of love for Austin (just how many Alamo t-shirts do you guys own?) Adam (Green) and Joe (Lynch) play highly dysfunctional but scarcely disguised versions of themselves: Two horror fans working for cable access and dreaming of making below-indie horror films (they even do a low rent version of their real horror podcast, The Movie Crypt.) Adam is still obsessed with his ex-girlfriend Corri (Corri English), who shares an apartment with Joe's deeply disturbing girlfriend Laura (Laura Ortiz.)

This is a multi-camera horror sitcom. Or a multi-camera sitcom about horror films, depending on your perspective. Green and Lynch are obsessives about gore movies, that's known. But they really get all the tropes of the sitcom genre. If they didn't, Holliston would faceplant and just be some sketches with cameos. Instead, it's ridiculous and overblown and really funny, with the light dramatic beats that a sitcom needs (Will Laura leave Joe for the world's worst art school? Will Adam and Corri ever get together? Will they ever actually make a film?) it's a much finer and funnier blending of genres and tropes than Lynch's first pass in Knights.

For season one, FearNet gave Green and Lynch free reign on episode length, but for season two the series hits the traditional sitcom half hour (read 22 minutes plus adverts) format. Back before the show first aired, I chatted with Green and Lynch about the longer run time, and Green called it their "secret weapon. … if I had to cut that pilot down to 22 minutes, it would be nearly as good as it is. The heart would have been sucked out of it and it would just have been the story. 'Corri's back, Adam hires a hooker, hilarity ensues. Done.'"

This time, the stories may be shorter, but that means the 10 episode season has extra time to play with format. So there's a found footage episode, a Christmas special, and even an animated one-off. But at its best, it's four people and their weird friends on one of four sets (apartment, office, bar, diner.)

It's a modern, often post-modern, spoof on the sitcom rules, and that's why it works in its own cranky, quirky, idiosyncratic way. There's also more than a dash of Louie CK's often overlooked Lucky Louie, his meta-sitcom before he knocked the comedic "it" out of the park with Louie. Like that shows, Hollistonlooks like I Love Lucy, but there's a blast of Curb Your Enthusiasm. Seinfeld's in here too, not least in Green and Lynch's perpetually unfinished project, soccer horror Shinpads ("When They Score … You Die!") Holliston doesn't so much play with the fourth wall as put some nice framed prints on it and wave through the window at the neighbors. "Do you even read the scripts you write?" Ortiz acerbically guns down Green after one particularly facile narrative exchange.

Ortiz may be the show's true secret weapon: A tiny Colombian goth Phoebe with a squeaky voice and a penchant for blasphemous and gruesome art. Her endearing and deadpan delivery of a script loaded with pop culture and serial killer references (episode five plays a delicious and highly inappropriate joke about how much a demonic kewpie doll Lori is) adds some delicious acid to the humor.

It doesn't hurt that Green and Lynch can call on a roster of modern horror icons, all of whom are more than willing to take comedic pot shots about themselves. Bill Moseley (The Devil's Rejects, The Texas Chain Saw Massacre 2) returns as the wholly inappropriate Crazy Max, aping the classic Crazy Eddie commercials. Monster master Kane Hodder is back as a manic depressive version of himself that never got over being recast for Freddy Vs. Jason, plus Green's Hatchet II star Danielle Harris in a disturbing self-spoof (you'll never watch Halloween 4: The Return of Michael Myers.) the same way again. There's also some new faces, like a one-off cameo by Guardians of the Galaxy director James Gunn as John Anguish, the world's most annoying recovering alcoholic. 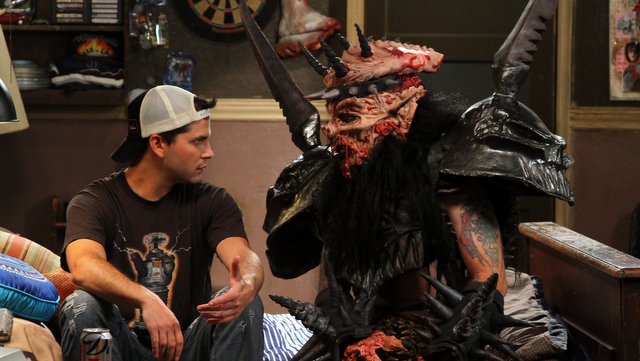 But there's a certain tragedy with this latest release. One of the show's most hilarious recurrent jokes was that Adam has an invisible friend living in this closet. It just happened to be Oderus Urungus from shock metal maestros Gwar. It was a hammer blow to the heart of the metal and horror communities last month when Dave Brockie, the man behind the monster mask, passed away unexpectedly.

When the news broke, Green Tweeted a typical exchange between the two:


"Come on, Oderus! How am I supposed to figure out my life without you?"
Oderus: "…Don't care!"

Remember Wilson, the over-the-hedge voice of wisdom from Home Improvement? That's Oderus, just that all his advice is dismal, destructive, and generally involves making sure you don't get caught. It's like the Blue Fairy telling Pinocchio to give everyone splinters, and Brockie turned his stage persona into a leering, whining, cat-stealing TV comedy gem.

It's hard to think about the show without Oderus stepping up the insanity. Still, at least there will be Dee Snider – yes, that Dee Snider from Twisted Sister – as a perfect spoof of himself: Lance Rockett, the ambiguously sexual vocalist of Diver Down (Holliston's leading Van Halen original covers band.) In season one, Lance seemed like a favor to the boys, but this time he's more perfectly meshed, carrying his own sub-plots with flair and (dare one say it) a little bit of subtlety.

It's so weird to think that a director has two releases out, within a week of each other, and they're both somehow tainted. Especially since Lynch is a really nice guy, and a film maker who believes that movies should be fun. Plus Knights has a killer practical monster, and who doesn't love that? So maybe it's time to slip in a copy of Holliston, relish Oderus one last time, and hope that it sells enough copies that we get that director's cut of Knights soon. Now that would be bad ass.

Knights of Badassdom (EOne) and Holliston Season 2 (Image Entertainment) are available now on DVD and Blu-Ray. Gwar has founded the Dave Brockie Foundation "a resource for artists in the fields of music, film, literature and all visual arts who cannot find funding through mainstream channels." More info, and you can donate to the trust, at www.gwar.net/dave-brockie-foundation.