Everything You Need to Know About TableTop Day 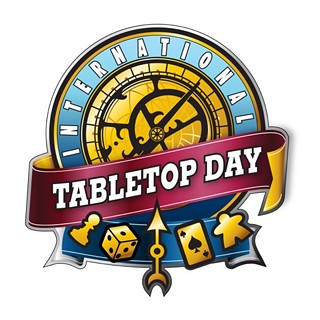 The good news: This Saturday, game and comic shops all over town will celebrate International TableTop Day, a board game holiday invented by Wil Wheaton’s YouTube show, TableTop! The bad news? There’s no way Austin has stocked enough pizza and Twizzlers to power the event.

April 5, 2013 marked the inaugural International TableTop Day – a holiday encouraging board gamers to leave their basements and play their favorite games at comic shops, game stores, coffeeshops, book stores, libraries, or anywhere else they like to play. Last year saw over 3,100 events across 64 countries. Boyan Radakovich, producer of TableTop, discussed the event and the growing popularity of tabletop gaming at South by Southwest this year. You can read more about that talk – and a few spoilers on what the show has planned for this year’s TableTop Day – here.

As with last year, several Austin comic shops and game stores will celebrate TableTop Day with demos and open gaming. Rogues Gallery Comics & Games will be hosting their second annual TableTop Day event. “We've got five different games being demoed starting at 12:30 and running until 6, and then we'll have open board gaming until we close at 9pm,” says owner Randy Lander. “The games we're demoing are Coup, Munchkin, 7 Wonders Gloom, and Castle Panic. We'll also have Steve Jackson Games coming out to demo Zombie Dice and the Chupacabra dice game, and there will be lots of door prizes and bonus cards.” For the open gaming later on in the evening, lots of games will be available for general play. And if Steve Jackson Games sounds familiar, that's because they’re the Austin-based company who makes Munchkin, a widely popular card game.

At Great Hall Games, there’ll be open board gaming, like every Saturday. “Although we’re also inviting some of the people from our historical miniatures community,” says Aaron Somerville, events and social media manager at Great Hall Games. These players will demo war-games played with hand-painted miniatures. “We’re encouraging people who play what are called 'skirmish games' – games that are small-scale, there’s only a few models on each side, and you’re only representing a very small battle – to come in and demo some pick-up games.”

If you’re a newer gamer and wondering where to start, Somerville and Lander both independently recommended Settlers of Catan and Carcassonne. “Settlers of Catan is a game where you try to gather and trade various resources – wheat, stone, etc. – to build roads and settlements,” says Lander. “Carcassonne is a game where you build a French village using tiles that have roads, cities, and fields.” To that list, Lander also recommended Ticket to Ride, a game in which you try to connect cities and build the longest train. “They sound a little dull in premise, but the games are a ton of fun, easy to learn, but always challenging,” says Lander.

If you’re looking for an intro into non Euro-style tabletop games – something decidedly different from Catan or Ticket to Ride – then Somerville’s got you covered. “Between the space of uber-nerddom and general gaming, there’s this game Star Trek Attack Wing, where you have little pre-painted Star Trek ships, and you put your different captains and crew on, and then you have them fight,” he explains. “That rolled out last year, and it’s from a company called WizKids. They’ve had a really great release schedule. By the end of this year, they will have released nine waves of expansions. It’s a complete money sink, so it’ll put you in the poor house if you get into it. But it’s a fantastic game, and we’ve had a fantastic response from the community.”

Regardless of your experience level or where you head this Saturday, don’t be shy. Gamers love to talk about games. “I find that the community around here is really good,” says Somerville. “If you show up, and you’re like, ‘Gee, I’d really love to get into board games, and I don’t know where to start,’ they’ll pull out a chair and sit you down right then … Being nerds, we’re kind of starved for love anyway.”