Singing Out for the Sound of Silent

Score one (or seven) for silent film 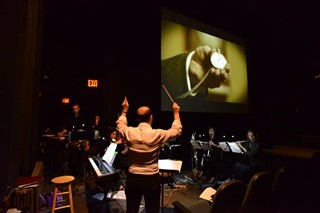 Hello darkness, my old friend
I've come to talk with you again
Because a vision softly creeping
Left its seeds while I was sleeping
And the vision that was planted in my brain
Still remains
Within the sound of silence.

Here in the live music capital of the world, we have a tendency to place an emphasis on the loud, the brash, the soundtracked … or at least the audible. But our independent film scene is a force to be reckoned with as well, and more than one series has focused its efforts on the beauties of the silent film era.

The forthcoming Sound of Silent Film Festival aims to marry those two loves, pairing modern decibly impaired films with an ensemble of six musicians tasked with creating a soundtrack – and every important sound effect – for seven silent or dialogue-free films.

It's a technique familiar to Austinites who've ever seen Graham Reynolds & the Golden Arm Trio perform a live score at the Alamo Drafthouse, but this time it's brought to you by Seth Boustead's Access Contemporary Music group out of Chicago.

Still trying to figure out what we're talking about? Here are a few videos from past performances.

Now that's something to sing about.

The Sound of Silent Film Festival will be held Friday, April 11, 7:30pm, at AFS at the Marchesa (6226 Middle Fiskville). Visit the Austin Film Society website for tickets ($12, general admission) and complete details.