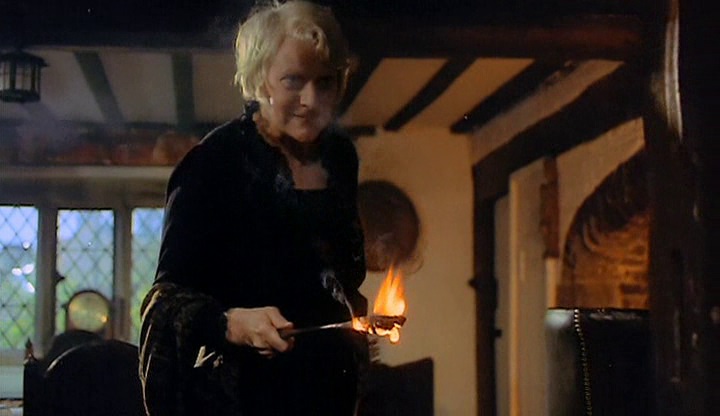 When American audiences think about British horror in the 1970s, they tend to think about the Gothic high drama of Hammer and Amicus. But the truth is, you can't really have that discussion without talking about the exploitation bloodbaths of Pete Walker.

Walker is a weird figure. A 1970s libertine with a conservative streak, he hated horror films, preferring to call his work terror. This week, Redemption releases two of his most infamous works: The proto-giallo The Flesh and Blood Show (1972), and the psychotic killer bloodfest Frightmare (1974.)

There are the real British releases, down to the 'X' certificate before the titles. They catch a specific era of the UK: Post-swinging 60s, pre-punk, a nihilist, collapsing, crumbling time. Frightmare opens with two definitional scenes of the time: A scummy club where biker gangs rub angry shoulders with burly working men, and an aspirational lower-middle class dinner, of the kind later spoofed in Mike Leigh's seminal TV satire Abigail's Party. The connecting factor is family: Debbie (graduating child actress Kim Butcher) is the jail bait hanging around with the wrong crowd and finding a perturbing skill in manipulation. Meanwhile her sister Jackie (Deborah Fairfax) is trying to be her proxy mother while holding together her own wine-and-fondue lifestyle. The big question is, where is their real mother? How exactly are they connected to the gruesome seaside carnival murder from 20 years previously (caught in black and white like an out-take from Brighton Rock)? Turns out someone in the family has a taste for human flesh, but is it too obvious to assume that it's batty old mum?

The true star of the picture isn't revealed until quite deep into the story. Yet the role of Dorothy is a surprise because Sheila Keith was not a horror actress. She was a respected stage performer who, by 1974, was best known as Mrs Cornet, the cook in long-running soap opera Crossroads. Putting her in a gore flick would be like moving Ann Davis out of the Brady House and into a charnel house. But that's what Walker does, and the end result is one of the most entrancing and disturbing performances of the 1970s.

She's the epitome of the nice old lady, but there's a cold blackness under those cardigans and shawls. As the criminally unhinged Dorothy, kept scarcely unchecked by her devoted husband Edmund (distinguished character actor Rupert Davies), she's a Tarot-obsessed chameleon: Kindly one second, killer the next.

Walker first saw Keith's potential as a horror icon earlier that year in sadomasochistic shocker House of Whipcord. The pair worked together three more times (House of Mortal Sin, The Comeback and House of the Long Shadows), and every performance is worth watching. As scripter David McGillivray points out in the included extra (borrowed from a 2005 Anchor Bay release) "Sheila Keith: A Nice Old Lady?", she had the makings of a real scream queen: But as Walker bemoans, there were so few British films being made around that time, there just weren't the roles for her. In Frightmare, she gleefully leaps on the part of Dorothy. She's like Christopher Lee or Peter Cushing: A multi-talented performer who never saw horror as 'slumming it.' She took this all seriously, and she adds maniacal depth to the part. 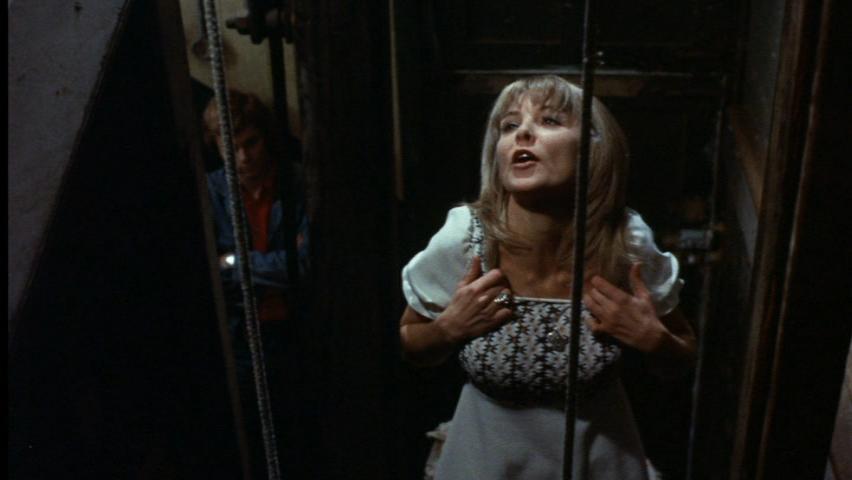 No such issues with the sleaze-and-slice of 1972's The Flesh and Blood Show. A year before Vincent Price turned the stage into a slaughterhouse in Theatre of Blood, Walker took a bunch of 1970s hippy actors and dumped them in an abandoned seaside theatre. They've been hired by a mysterious producer to put together a revue, with a promise of a London run. Cue much bed-hopping and dressing room voyeurism. Of course, there's no way this can't go wrong, as the cast start disappearing, occasionally resurfacing dismembered.

There's a lesson in 'tell, don't show' going on here. Show is more gruesome, while Frightmare is more disturbing. In part, it's because the earlier film undercuts itself in strange ways. The soundtrack is just baffling: By relying on woefully misplaced marimbas and oboes, Cyril Ornadel's score stamps all over Tony Anscombe's spacious and eerie mix, which as a real loss. Anscombe builds up something akin to the aural tone of the best gialli: In fact, the whole is a like a British giallo, combined with the stage-bound and purposefully overblown roots of grand guignol.

Which is where the other slight problem comes in, and it's in the casting. Ray Brooks is a great character actor, and his performance as the furrow-browed director in isolation works really well. Unfortunately, he was one of the BBC's go-to actors to provide voice-overs for kids TV shows like Mr Benn and Jackanory, so it's a bit odd seeing him bumping into severed heads. That said, Frightmare has a cameo from Andrew Sachs, who later became a household name as Manuel, the inept waiter in Faulty Towers.

The oddest casting for British audiences may be Robin Askwith, who became most famous for his leading roles in the Confessions of a softcore-comedy franchise. This was his second film of the year for Walker, as he'd churned out another nude romp, Four Dimensions of Greta. The other shared asset (oo, er) is a 3D camera. Greta had some inexplicable 3D added in select scenes, while Show has a flash-back sequence at the core of its denouement. As Walker noted, that was a terrible idea, because audiences had a terrible habit of losing the glasses. Fortunately, for home release Redemption has set 2D as standard, and included both a digital 3D conversion and (for aging Luddites) the original red/blue lens anaglyph format. Mercifully, it's only 10 minutes, so the risk of headache is minimal.

Yet for all those flaws, Walker concocts something steamy and sleazy in all the right ways. Stick on an Italian dub and some sequences could be pulled straight out of Five Dolls for an August Moon-era Mario Bava. He embraces the theatricality and ridiculousness of the situation, especially in the near-camp of the final act.

Walker may never get the plaudits he deserves, because he doesn't have the constant advocates that a Lewis or Wishman or Rollin has attracted. Yet, imperfect as they are, these films show a unique and smart voice in cinema. He was never afraid to have the police intrude in the action (thus smartly breaking Hitchcock's observation that his movies would never exist if a character called the cops.) Instead, he uses them to brig a procedural, almost who-dunnit aspect to the malice, and for that alone the films – especially Frightmare – earn some shelf space.

Frightmare and The Flesh and Blood Show are out now on DVD and Blu-ray from Redemption.