When Jimmy Comes Out, Go Crazy

Crowd's-eye-view of a 'Jimmy Kimmel Live!' in Austin taping 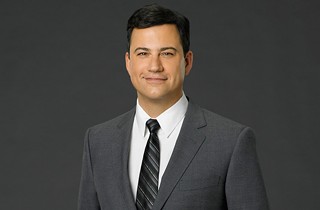 Austin's been on the receiving end of loads of late-night love all week, thanks to Jimmy Kimmel, who's been taping his weeknight chatfest at the Long Center since Monday. The city comes off resplendently on the small screen, but what's behind all those spectacular shots of a packed and cheering Dell Hall is a lesson in crowd control.

That's the big takeaway from attending the taping for Wednesday night's show. To begin with, anyone looking to fill one of the 2,000 seats available each evening (slightly less than Dell's capacity of 2,300 since some seats are lost to technical equipment and obstructed views), you're encouraged to get in line more than three hours before the 6pm showtime. That's to allow for those hundreds and hundreds of people to be checked in, searched (Jimmy may be a funny guy, but his security is pretty damn serious), and seated at least a half-hour before the taping.

Once the crowd is inside (and with no alcohol or other adult refreshment to help them while the last hour away), it's kept occupied, rather like a preschooler whose folks are busy with chores, by videos – here, a string of Kimmel's greatest hits, such as episodes in his long-running "feud" with Matt Damon, displayed on several massive screens in the hall. And continuing the theme, show staff did just what your dad did before a long car trip: gave that last-minute warning to go to the bathroom now because once we get started, we're not stopping. Which is one thing if it's just you and your sister making that final trip; it's much funnier when Dad says it, and a few hundred people jump up at once and make a beeline for the loo.

Not that I'm kvetching. For a television program broadcast nationally, a live audience needs to be managed carefully, and I genuinely appreciated the efficiency and smoothness with which the Kimmel show dealt with those of us in the seats. But it's also a kind of game in which you have to be a willing player, following the rules and giving your all. That was reinforced during the final prep for the show, made by the staffer whose job it is to build the audience's energy to a fever pitch and keep it there for the duration of the show.

God bless the Warm-Up Guys of the world. Theirs is a thankless role in this pageant. They aren't the stars; they are merely the ones who come before and prepare the way for the ones everyone is really there to see – they're the show biz equivalent of John the Baptist, and you have to figure that most people in the house would also be just as happy to see their heads on a platter. Don Barris, who fills that role for the Kimmel show, will have his reward in heaven, because there's really nothing in this world that can adequately compensate him for currying an audience's favor with T-shirts, caps, and a couple of $150 gift cards and just pumping up the volume again and again for more than an hour and a half. And that's just what he did. Every break for a commercial, he'd leap into the breach, his voice – which must have been bequeathed to him in Sam Kinison's will – cutting through the flagging energy of the hump-day crowd and exhorting us to be louder, louder, BATSHIT CRAZY LOUD whenever the show came back to Jimmy. I don't know how he sustained that kind of charge for that long, but if Red Bull's ever in need of a spokesmodel, it should put Barris on speed dial.

Which was a marked contrast to the show's star. Kimmel has a kind of chill air about him – not as in aloof, but as in calm, never rattled, never straining, just low-key and at ease. His interaction with the audience during the breaks was genial and relaxed, making no attempt to sell himself or pander to the crowd. Even when he was going for a laugh – as when he quizzed his onscreen sidekick, Guillermo, about being drunk and went to far as to smell his breath for confirmation, or related the story of Monday night guest Snoop Dogg putting Saran Wrap over the smoke detector in his dressing room to keep it from going off while he… relaxed – Kimmel never leaned into the joke. He was as loose as if the 2,000 of us were just a half-dozen buds shootin' the shit in somebody's den.

That chill demeanor can be a double-edged sword when he's interviewing a guest, though, especially when he's comically riffing off something that person said. With someone such as Rachael Ray, who was on that night promoting her Feedback festival at Stubb's on Saturday, he can make a deadpan quip and she can read the humor in it, which leads to a teasing exchange. (A highlight of the show was when Ray offhandedly referred to the hot dogs she'd be serving Saturday as just "dogs," and Kimmel tied it in to her earlier comment about loving all the dogs she'd seen at Jo's Coffee, suggesting she was the reason there were no dogs in Austin's coffeeshops anymore: "Rachael Ray has been eating them!") On the other hand, with Robert Duvall, who was on to plug the SXSW Film premiere of A Night in Old Mexico, the breeziness of Kimmel's humor seemed to fly right past him at times, leading to the odd silence in the conversation. That said, Kimmel's ease meant that he was never at a loss when a line didn't land, and he sailed right on as if everything was just dandy.

And really, it was. The stage was a gorgeous evocation of Austin through neon, with replica signs of more than a dozen local businesses, from the Continental Club to Alamo Drafthouse, from Blackmail to Kruger's Jewelers, strung in front of a black-and-white photo backdrop of the facade of the Paramount Theatre. House band Cleto and the Cletones didn't have Jimmie Vaughan or Johnny Winter sitting in with them on Wednesday, but that stop them from rockin' the house with a more than respectable cover of Stevie Ray's "Lover Boy."

The only real challenge came after the taping proper, when musical guest Damon Albarn worked his way through several numbers. The Blur and Gorillaz frontman opened with a couple of numbers from his highly anticipated solo album, Everyday Robots, but that didn't stop the house from shedding audience members, and Kimmel show staff had to work to keep all the orchestra seats within view of the cameras filled while they kept rolling. The early departure seemed less a reflection of Mr. Albarn's performance and more a sign of fatigue on the audience's part. Turns out being BATSHIT-CRAZY LOUD for Jimmy can be exhausting.