Some say it's a thin line between untrammeled creativity and madness. But what if the difference is just context? 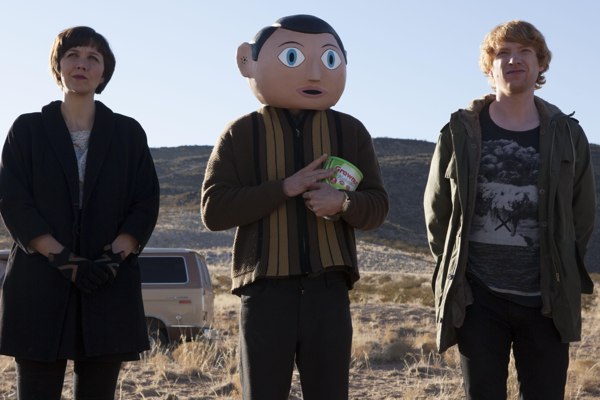 There was a real Frank – British oddball Frank Sidebottom, a loopy cousin to equally mysterious bands like the Residents. Based loosely on an autobiographical article by Jon Ronson (The Men Who Stare at Goats) about his time in Sidebottom's band, Frank is a Gondry-esque meditation on commerce, art, and the self-destructive nature of outlandish creativity. Most importantly, it's about the perils of not understanding the delicacy of genius. The script, co-written with Peter Straughan, makes the Ronson analog Jon (Domhnall Gleeson) the real menace, as his fannish and well-intended aspirations to genius – and to misguidedly unwrap the mystery of Frank – threaten to drag the maestro into tepid mediocrity.

In contrast, Scoot McNairy as engineer/manager Don is the damaged hero, crushed under the burden of knowing he can never match Frank's strange genius.

Topping it all is Fassbender's performance, a work of fragile wonder that hides nothing behind the blank eyes and enlarged cranium. Yet there's a strange resonance for anyone who knows the real Frank's work. This Frank-not-Frank is like putting two black disc ears on a mouse and expecting the audience to not think "Mickey."