The free and public expo continues through the weekend as the crowds swell and parking grows increasingly scarce. Here are some of the highlights from Friday that might help your wandering through the Palmer Events Center. 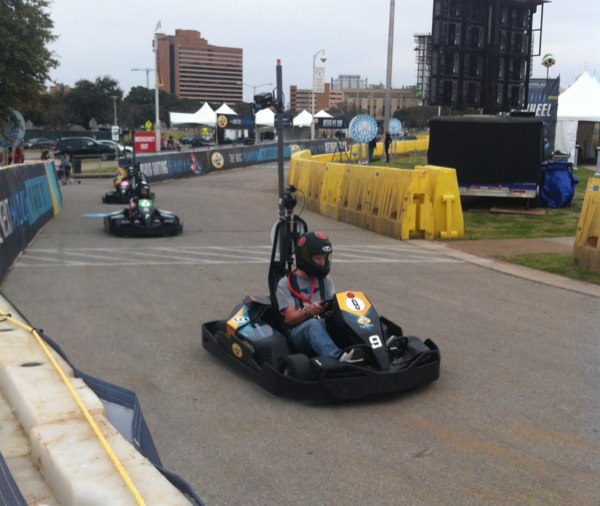 Mario Karters on the track: That blue spot on the track behind the green car gives racers a burst of speed (!)

Nintendo went all out with battery powered carts and a respectably sized track in the lot on the north side of the building. Cameras are mounted on each vehicle so you can watch the action on the big screen divided into four just like you were playing Mario Kart at home (but we recommend keeping your eyes on the track). Even more impressive are the "power-ups" painted on the track that actually give your car a boost of speed if you drive over it. The main problem is that the carts go through about four drivers every 10 or 15 minutes, so demand will far exceed supply. Expect massive lines if the weather even allows carting at all. Also, they're doing breathalyzer tests (seriously), so if you were drinking the night before you likely won't be able to race. Any trace of alcohol will exclude you. 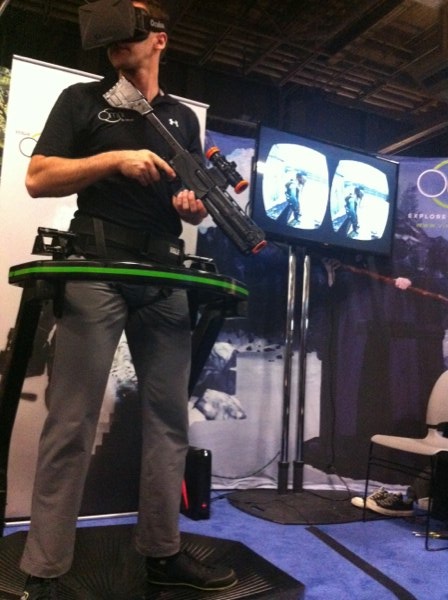 This guy knows how to make virtual gun-fighting look good.

Developers Are Betting on Virtual Reality

The most obvious trend this year is the proliferation of the Oculus Rift. The virtual reality headset which is rumored to hit stores late this year can be seen at many booths (as well as the Game of Thrones exhibition over at Austin Music Hall). And they are popular. Perhaps the most impressive rig is the Omni. This contraption (pictured above) puts you in a concave dish and lets you control player movement by running around. Strap on the VR headset and it's like you're moving in an alternate world. The contraption requires special sneakers to keep your feet sliding so it mimics movement. The running motion looks a bit awkward, but it just seems to take a little getting used to. The Omni will run you $500 and will work with most PCs. This will be a hot ticket, and there's only one at the Expo, so you'll likely have to be pretty aggressive to try it out. We don't condone violence.

Other VR setups include a remake of Paperboy where you get on a bike, put on the Oculus Rift and a Kinect awaits a throwing motion from your hands to fling a newspaper into various lawns and obstacles. It sadly looks like kids doing a Nazi salute while blindfolded, but luckily the players can't see themselves. Local studio Tiny Utopia have a motorcycle racing game you can try out which includes sitting on an exercise ball for a little bounce. But what might be my favorite use of the Oculus Rift is Classroom Aquatic. Step inside the world of a youngster in a class of dolphins trying to cheat on a test. Look around at classmates' papers, but don't get caught by the teacher. Who hasn't dreamed of being taking a quiz while surrounded by sea mammals? No one? Just me? 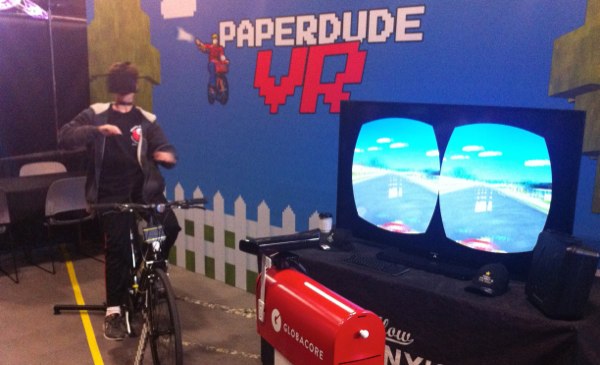 Take the Time to Explore

There are loads of great independent games that might take a little time to truly understand, but in most cases it's worth it. Try not to hog any one gaming station, but a lot of the developers are on hand and are more than happy to talk to you about their creation and help you get a feel for the controls.

The inaugural awards take place tonight, 7pm, at the Long Center. It is also free and open to the public. But we've already covered that. Just wanted to remind you.