Controversial figure will speak on how tech can fight surveillance 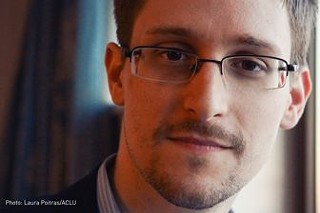 Edward Snowden, appearing at SXSW Interactive on Monday via videoconference

Hero to some, villain to others: SXSW Interactive has just announced that Edward Snowden will be part of a videoconferenced conversation with the American Civil Liberties Union's chief technologist, Christopher Soghoian.

In what is sure to be one of the most heavily anticipated and controversial discussions, Snowden will talk about his views on surveillance culture, the NSA, and what role the tech community can do to curb government intrusion into privacy.

Snowden, a former CIA employee and NSA consultant, has been a divisive figure since his mass leak of documents, and is currently in asylum in Russia while the U.S. seeks his arrest for espionage. In their announcement, SXSW wrote that the festival "agrees that a healthy debate with regards to the limits of surveillance is vital to the future of the online ecosystem."

The discussion will be moderated by the director of the ACLU's Speech, Privacy and Technology Project, Ben Wizner, who also serves as Snowden's legal adviser.

"A Virtual Conversation with Edward Snowden" will be held 11am, March 10, in Exhibit Hall 5 on the first floor of the Austin Convention Center, and simulcast in Ballrooms BC and D. It will be open to anyone with a Platinum, Gold or Interactive badge. If you can't make the day, it will be available in its entirety afterward via www.aclu.org.

Stay tuned to all our SXSW coverage at austinchronicle.com/sxsw.