A supernatural weekend in home releases Abigail Breslin gets worried about unearthly house sitters in Haunter

You can tell that SXSW is nearly upon us: Distribution companies start releasing titles that they acquired there last year. A couple of weeks ago, we had temporal teen angst with +1, and now we get another looping trip through the perils of youth, Haunter. This time, there's no science fiction maguffin in place, but something supernatural.

It's clear there's something very wrong inside the mist-shrouded, Reagan-era, Johnson household. Every day, 15 going on 16 year old daughter Lisa (Abigail Breslin) wakes up to the same annoying squawk on a walkie-talkie from her brother Robbie (Peter DaCunha), the same pancakes being served by her mother (Michelle Nolden), and her father (Canadian TV regular Peter Outerbridge) perpetually trying to fix the car. She knows there's something cosmically unbalanced, beyond the fact that she's going through the same day over and over again. After all, how does the family eat mac and cheese for lunch, then mashed potato for dinner, every single day, without dropping dead from heart attacks.

Clearly, director Vincenzo Natali blends the looping narrative of Groundhog Day with the supernatural claustrophobia of The Others. However, unlike the Bill Murray classic, the story by Brian King (The Day the World Ended) drops begins on an unknown iteration of the constant repetition. Breslin's search for answers leads her to ask some dark questions, especially when she makes otherworldly contact with another girl, Olivia (Eleanor Zichy, from the US adaptation of Skins) and the mysterious and malevolent Pale Man (Stephen McHattie of the Canadian cult horror Pontypool.) As Taking Back Sunday so sagely pondered, "What's it feel like to be a ghost?" The question is, who are the living and who are the dead?

Where Haunter finds narrative strength is in suggesting that Lisa's search for clues may make her situation even worse. "History doesn't repeat itself. It rhymes," McHattie proclaims, as much threat as explanation. There's a strong kinship to the under-rated sci-fi thriller Source Code, as Lisa attempts to crack the puzzle of her own private purgatory and realizing that there are no happy endings.

Haunter is shot through dust and pallor, with the whites almost ivory, the blacks deep shadow, and the flesh tones reminiscent of a faded Polaroid. The Johnson's version of the 80s is more Spielberg than Michael Mann, suburb and and muted. Much credit must go to art director Ian Hall and production designer Peter Cosco, who build up the sense of disconnected time so perfectly. It also adds to the sense of mystery: Why exactly does a teen in a contemporary film have a David Bowie Low poster, and why is her brother so dedicated to Pac-Man on a Nintendo?

But it's really Breslin's film. She plays the alienated goth (proper goth, not just some panda make up and woe-is-me-isms) teen Lisa with a tragic layer of confusion and compassion. Her eyes – shown in softened close-up with an unnervingly small depth of focus – are constant blackened pools within tiny rims of blue, as she carries the whole family's pain for them. She's so good at convincing the audience of the metaphysical strain of being stuck in repeat mode that the movie almost falters when the rest of the family finds out what's going on.

Yet, because he's telling what is basically a bedtime tale with teeth, Natali still sticks the landing. He isn't trying to re-invent any wheels. Instead, he's creating an eerie supernatural tale that plays (at least a little bit) by its own rules. No-one has ever accused JT Petty of playing by any rules. Instead, he specializes in the monstrous side of humanity. His debut, 2001's highly disturbing Soft for Digging, and his terrifying meditation on voyeurism and underground horror, 2006's S&Man, may have been interspersed with well-paying gigs writing for the Splinter Cell and Batman gaming franchises. But those two films alone have earned him a place in the micro-budget pantheon, exploring what depravity and inhumanity mean. He's straight back to that theme with his latest feature, Hellbenders. The only difference this time is that he added comedy to the mix. 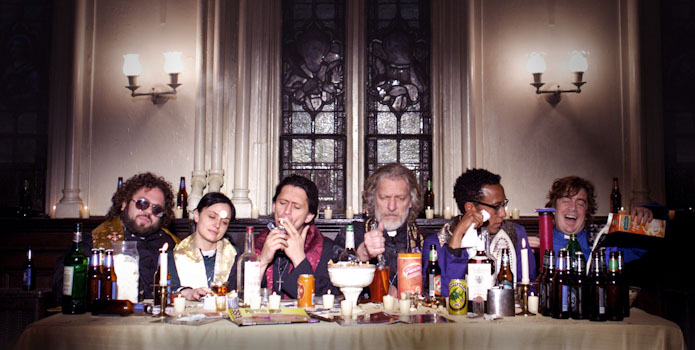 Best. Seminary. Ever. Debauchery to fight the devil in Hellbenders.

If there's something strange in your neighborhood, who you gonna call? The Augustine Interfaith Order of Hellbound Saints, an interdenominational alliance of exorcists with a very particular mission. They must stay in a perpetual state of sin just in case they have to drop what describes as the nuclear option: Get possessed, commit suicide, and then drag the demon to hell with them. Hey, it worked in The Exorcist. This makes them a cracked-out Ghostbusters, with Andre Royo (The Collection and Bubbles from The Wire) as their accountant of sin. After all, they have to prove that they're really debauched enough, and that means writing up booze, weed and strippers as work expenses.

That's all fine for Lawrence (Clifton Collins Jr., Pacific Rim), who is blissfully caught between his understanding-but-tired-of-this-shit wife (Samantha Buck) and fellow exorcist Pastor Elizabeth (Robyn Rikoon), who he banged 11 months ago to keep up his debauchery score.

Things are going fine until Stephen Gevedon (Session 9) turns up as their own interfering Walter Peck and orders everything be shut down. Which is unfortunate, because the demon/Viking fire giant Surtr has decided this is the week to open the gates of Hell/bring about Ragnarok (the eschatology of the film is deliberately blurry.)

It has so much to recommend it: the sloe-eyed degenerate Macon (Macon Blair, known around the Chronicle office as part of The Man from Orlando and soon to be seen in the phenomenal revenge drama Blue Ruin) and Erik (Balls of Fury's Dan Fogler), sadly pining for Elizabeth, both have their hilarious interludes as they slump around the shared house. But it's Clancy Brown (always memorable as Highlander's the Kurgan) as the grizzled, debauched but devout Angus who steals the show, and probably your spare change if you're not looking.

There's even a glorious cameo from everyone's favorite indie-horror regular Larry Fessenden as a cop friendly to the cause. But those components never quite add up to more than their sum, as Hellbenders is disappointingly tonally erratic, flipping between genuine malevolence and high farce. It's clear that Petty was going for something close to the supernatural slapstick that Don Coscarelli summoned that same year with John Dies at the End, but he never quite smooths the transitions.

Part of that is deliberate. Petty actually crowdsourced part of the film, asking visitors to bloody-disgusting.com/ to come up with extra footage, to represent the incoming global pandemic. Some of the best are included in full as an extra. Most depend on the standard growly voice, jerky movement tropes of the Paranormal Activity era, but some are deliciously disturbing. "8mm Footage of Real Life Possession" by Toppings of Terror has the look and feel of an old Psychic TV experimental film, while Dolan Coleslaw's "Possessed Girl Found in Subway" has the malevolent eeriness that Petty perfected in Soft for Digging.

So while Hellbenders is never equal to the sum of its parts, it is fun, and actually works better on repeat viewings. The household sequences are a real blast, and it all may well have worked better as a Spaced-esque surrealish comedy. It already has the structure of a TV show, with a series of small sketches and vignettes. Plus, as Petty and the cast point out on the commentary, there are few things funnier than Clancy Brown as a half-dressed priest calling someone a clipped-dick Shekemite.