'From Dusk Till Dawn' Returns

Everybody be cool. We've got an exclusive image from the new show. 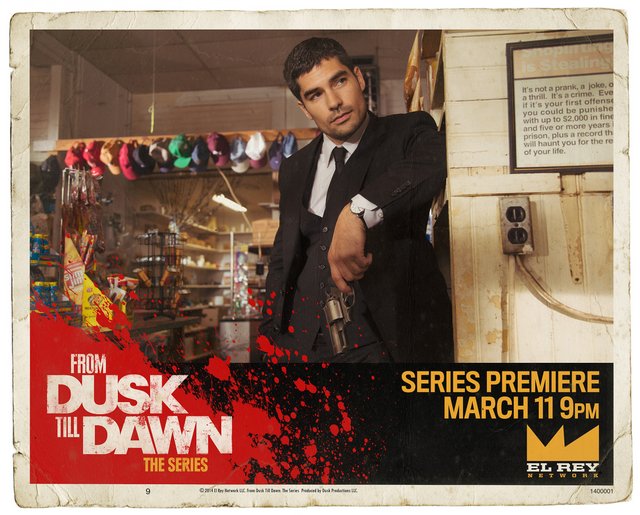 D.J. Cotrona as Seth Gecko in the new TV adaptation of From Dusk Till Dawn, debuting at SXSW (Image courtesy of El Rey Network)

Everybody be cool. You. Be cool. We've got an exclusive preview image of D.J. Cotrona as gun toting bad boy Seth Gecko from the upcoming From Dusk Till Dawn TV show, plus news of a special cast and crew screening of the 1996 horror-crime-comedy original.

The new series will have its world premiere at SXSW on Saturday, March 8 at 4:30pm at the Vimeo Theater, with writer/director Robert Rodriguez and many of the cast in attendance. For those of you that can't make the screening, it airs on Rodriguez's new El Rey Network on Tuesday, March 11 at 8pm.

But if you really want a chance to brush up on your biker/bank robber/Mesoamerican vampire lore before then, Austin Film Society is holding a special night of tribute to the original film. On March 5, Rodriguez and some of the movie cast will be attending a special screening at 9pm at the Marchesa Hall and Theater (6226 Middle Fiskville), preceded at 7pm by a moviemaker dialogue with the one and only Fred Williamson. Talk about your definitive cinematic badass: A former defensive linesman for the Pittsburgh Steelers, Kansas City Chiefs and Oakland Raiders and a three-time AFL All-Star, plus a black belt in Kenpo, Shotokan Karate, and Tae-Kwon-Do, Williamson is an icon of blaxploitation, Italian exploitation, and African-American independent cinema. His performance as Frost, the hard-hitting, vamp-slaying truck driver is one of the original's most memorable and beloved components.

Tickets for the screening and the Williamson dialogue are available now via www.austinfilm.org.