Revisiting 'Up In the Air' 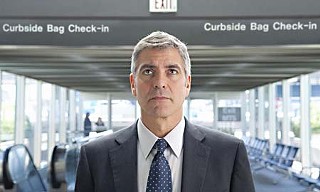 Last night, the Austin Film Festival hosted writer/director Jason Reitman and crew members from the 2009 Oscar-nominated film Up In the Air.

During the first screening like this, Reitman and co. divulged priceless stories and funny moments you will not find in any DVD extras. Reitman joked, "Directors never hear things; we are always kept out of the loop." This proclamation was reinforced when he chimed in during a crew member's narration saying, "I never knew that," sending the semi-crowded Spirit Theater at the Texas State History Museum into a chorus of laughter.

The movie takes a page from Italian neo-realism in that it used non-actors to play roles. The production team used airports where passers-by were actual passengers, and for the TSA agents, it was just a regular day. More importantly, in the opening sequence, a montage of just-fired individuals were people who had actually lost their jobs due to the recession predicament at the time. The idea came from his father and fellow director Ivan Reitman. "I had put an ad in local papers, saying we were doing a documentary about job loss and thousands sent in essays, and from there it was narrowed down to 50 people," Reitman said. The film flows in a very natural and organic way because of it.

In recent years, many movies – romcom and otherwise – have added a wedding scene to the mix. Noticing the trend, Reitman decided he didn't want his wedding scene to be a standard affair. "We hired a local wedding planner, a pastor, [and] a venue, and the camera guys were acting as videographers. For all intents and purposes, the actors [Melanie Lynskey and Danny McBride] are married," he said. Wonder if Lynskey and McBride are aware of this little detail?

• It took Reitman and co-writer Sheldon Turner seven years to complete the screenplay for Up In the Air.
• Having had George Clooney in mind for the part of Ryan Bingham, and on the assertiveness of Clooney's agent, Reitman visited Clooney in Italy while he was on vacation with his wife. Clooney read the script, loved it, and the rest is history.
• Up In the Air was the first movie allowed to film TSA security lines post-9/11.

Overall, Jason Reitman & Up In the Air: Live From The Director’s Chair was a great snapshot into the production of the film. The commentary was interesting and the crowd enthusiastic. At the end, Reitman quipped, "I'm learning a lot today about how difficult I am," ending the event with a generous applause.