John Barrymore's lascivious trip into the heart of his own darkness 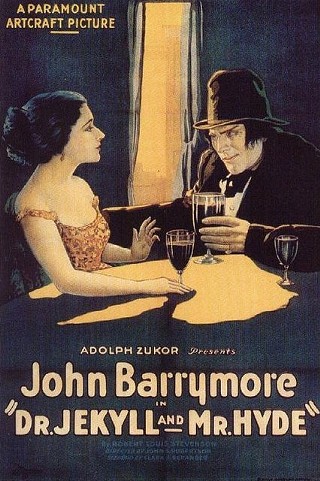 As Samuel Johnson allegedly said (and as Avenged Sevenfold quoted), "He who makes a beast of himself gets rid of the pain of being a man." That was the struggle at the heart of Robert Louis Stevenson's The Strange Case of Doctor Jekyll and Mister Hyde, and the underlying lesson of its 1920 adaptation Dr Jekyll and Mr Hyde.

Stevenson's tale of the battle of id and superego, played out on the streets of Scotland, has provided rich psychological fodder for Hollywood. Especially in Tinsel Town's early days: Along with The Hunchback of Notre Dame, it was adapted and re-adapted, to varying success. Arguably the most famous early version featured John Barrymore as the man at odds with himself. But it wasn't the first version, and Kino Lorber have created a package disc that also serves as a quick history lesson on the obsession with Stevenson's most Gothic tale.

In 1912, the mostly forgotten Thanhouser Studios turned out the second ever cinematic adaptation, starring future Paramount contract director James Cruz as the good doctor and his alter ego. His Hyyde seems mostly ineffectual, the majority of his crimes involving knocking over small children, tearing book pages and wearing a terribly floppy hat. Modern restoration firm Thanhouser Company Film Preservation Inc has their own version, which is online now. It's not as nice a transfer as the Kino disc, but it comes with a far more effective orchestral score, discordant and jagged, than the piano accompaniment provided on DVD.

While the Thanhouser version predates Barryman's incarnation, two other iterations included here owe it a huge debt. The golden rule is that no success goes uncopied, so in 1920 Louis B. Mayer pioneered the mockbuster with his own version, intending to piggy back off the success of Barrymore's version and con a few pennies out of the hapless punters. A 15 minute edit of the original 40 minute cut is included here, primarily for historic interest and to placate academic curiosity. Silent era professional villain Sheldon Lewis makes his Hyde shambling, twisted, almost chimpanzee-like, but due to the hatchet-style editing job, it's hard to see him as much of a threat.

Of course, it would have been nice if Kino could have included the other 1920 adaptation, F.W. Murnau's unlicensed Der Janus-Kopf (The Head of Janus) but seemingly no copies survive, so that's beyond even their powers (shakes fist impotently at history.)

There's nothing threatening at all about the third version on this disk. It's often forgotten that Stan Laurel was a comedic powerhouse before he started working with Oliver Hardy, and 1925's strange lampoon of Barryman's work, Dr. Pyckle and Mr Pryide, is a perfect example of his independent merits. One of the series of two reelers he created with director Joe Rock, the 21 minute comedy is a fine mess of pratfalls and elegant puns (no mean achievement for a silent movie.) Retaining the Victorian setting, Laurel's Jekyll is an effete snob with a good dose of hubris: His Hyde (whose bad wig and daffy grin seems to be an early version of Chitty Chitty Bang Bang's child catcher) is a mostly harmless goof, leaving bricks under hates, conning kids out of their ice cream and, instead of stealing away with women's virtues, annoying the crap out of housewives by playing knock and run. Oddly, the version included has a few more seconds than the Pathe version that crops up online, meaning it stomps all over the ending of a perfectly fine vase-over-the-head gag by rambling on. An odd choice, and the Pathe print would probably serve it better here.

By far the weirdest inclusion is an audio adaptation released in 1909, produced by the former king of the novelty hit, Len Spencer. Taking a break from his day job of transfixing music hall audiences with renditions of "Ta-ra-ra Boom-de-ay", he re-enacts the final fugitive hours of Hyde for an audio recording. See, kids, this is what being a horror fan was like before Netflix.

All have some merit, but are clearly overshadowed by the main feature, John S. Robertson's 1920 adaptation, powered by a legendary dual performance by Barrymore.

All the adaptations take severe liberties with the narrative, not least by transferring the location. Clara S. Beranger's script for Barrymore moves Jekyll's practice to that wretched hive of scum and villainy, Victorian London. Awash with oiks, slovens, tramps, and disaffected toffs who mock those beneath them, Barrymore's good doctor is a paragon of virtue who, through misapplied science, unleashes his own dark alter egeo. Inevitably, the relocation re-casts Hyde as a Jack the Ripper-esque figure, rather than a debauched and unrestrained man of twisted intellect.

The film also throws out pretty much all the plot and structure of Stevenson's novel. The book is effectively a detective story, with the connection between the two sides of the man not revealed until late in the story. It's also posthumous, as Hyde is found dead from suicide in Jekyll's clothes and his friends reconstruct the truth,

Instead, the unbelievably prolific Beranger takes her cues from the 1887 stage adaptation by Thomas Russell Sullivan, by making Jekyll into a kind of love story. The impossibly pure and noble Jekyll is the object of the affections of Millicent Carew (vaudeville star turned dramatic actress Martha Mansfield) - much to the chagrin of her father Lord Carew (Brandon Hurst.) He finds Jekyll's overbearing niceness insufferable, so the elder Carew gets an Italian dancer to rub up against him and blammo! he decides to unleash his inner Hyde.

A little history here. Stevenson's book was inspired in no small part by the infamous exploits of one of Edinburgh's most notorious figures, Deacon William Brodie. Aside from a pretty good pub just off the Lawnmarket in Edinburgh being named after him, he is most infamous for his dual life. By day, Brodie was a well-respected locksmith and city council member. However, when not busy at chambers, he was putting his key-cutting skills to other uses: Burglarizing the houses of the same respectable members of society whose homes he attended on matters of city business. He also had at least two mistresses, a small tribe of illegitimate kids, and a wild second life whose revelation sent paroxysms through the mucky-mucks of the Athens of the North. Beranger's Jekyll, like Stevenson's, both relishes and fears the degenerate pleasures he samples as Hyde (unlike Brodie, who just seems to have been annoyed that he got caught.)

It's a bravura performance from Barrymore as Hyde. He has something of a frog about him: a humped-shouldered, long-limbed and spindly-fingered creature, a design augmented by some primitive but effective prosthetics, and some splendidly subtle makeup effects, bringing out the bone structure. As the transformations worsen, and Hyde pushes to become the shared body's sole resident, the transformations become more profound, culminating in a still stunning final dream sequence that will have arachnophobes screaming. Yet he's not just a monster. While the earlier adaptations rely on him as a snaggle-toothed menace, Beranger remembers that Stevenson didn't write a rabid dog. Hyde is beastly, not just a beast. His entire purpose is to give Jekyll the license for licentiousness that the physician can never afford himself.

There's something very theatrical about the whole affair, mainly in its uninspired camera work. Considering how the German Expressionists were creating a whole new visual lexicon at the time, the cinematography is often uninspiring. It's not helped by this being a far from pristine print, blown out in some of the earliest scenes. Meanwhile Millicent is an underwritten part, doing little more than pining for Henry. First he ignores because he's off curing prostitutes of the pox, then he ignores her because he's giving them the pox. That said, Hurst's Carew is as remarkable a performance as Barrymore's Hyde. An aging libertine who thoroughly believes what music hall legend Marie Lloyd winked to her audience: a little of what you fancy does you good.

Doctor Jekyll and Mister Hyde (Kino Lorber) is out now on DVD.