The blacker side of the Emerald Isle: Niamh (Missy Keating) watches the world burn in Irish horror Dark Touch

Mud, rain, trees that look like skeletons in winter, darkness, and everyday clothes that could pass as funeral weeds. All part of why Ireland has become so synonymous with the Gothic.

Dark Touch (IFC) is part of a new strain of Irish-set and Irish-funded horrors, from the sociological terror of Citadel to the monster comedy of Grabbers. Set in one of the increasingly gentrified agricultural communities of Eire, its near-monochromatic lens is turned on Niamh (Missy Keating, daughter of Boyzone singer Ronan Keating. Boyzone. They were One Direction before One Direction. Oh, never mind.) She's a preteen with the unfortunate habit that everyone around her dies gruesomely and mysteriously.

Any horror involving children and the supernatural will inevitably draw comparisons to The Turn of the Screw, and its central idea of the uncanny being attracted to the young. In Dark Touch there's also a kinship to Carrie as psychokinetic mayhem follows Niamh. First it's a few shelves and pots falling down, then it's her entire family getting ripped apart by the furniture in a storm of eerie energy. The only one left even close to unharmed is Niamh, who immediately moves in with her neighbors Nat and Lucas (Marcella Plunkett and Padraic Delaney, from long running Irish TV restaurant drama Raw.)

Dark Touch keeps fairly close to the same path trod by Orphan, British creeper The Children and the recent remake of classic Italian mini-slasher Who Could Kill a Child, Come Out and Play: that even if they're not responsible for the telekinetic mass murder of their entire family, children are fairly awful: Meanspirited, dangerous little reprobates. In Dark Touch that reaches its zenith at the most disturbing kids' party since the nanny declared, "It's all for you, Damien," in The Omen. That said,pretty much the only thing that's worse is adults, because they just want to see innocence in the eyes of youthful malice.

Where Dark Touch takes a more disturbing turn is in the suggestion of child abuse. It hints that, whatever the real roots of Niamh's cloud of weirdness, its trigger is something more mundane than poltergeists or pyrokinesis. Oddly, that makes it a much closer kin to Turn of the Screw than many of its contemporaries: After all, Henry James left a Hanzel and Gretel-esque trail of crumbs about vile crimes perpetrated against his youthful characters. The difference here is that, while James' version of acting out emotional damage meant the kids getting expelled from school, Niamh – or whatever is following her – leaves a trail of shattered corpses.

Much of its power comes from Keating's performance. In most child horrors, you're waiting for the moment when the infant is revealed to basically be an adult psyche in an unformed frame. That never comes here. Her constant sense of keening pain, of fear, and an inability to process what its going on around her, shows a prodigious level of insight from the young actress. When Niamh does give hints and flashes of how damaged she truly is, it is with the terrifying knowledge that she thinks this is normal.

Writer/director Marina de Van is, I will admit, new to me. Yet with a 20 year career in shorts, she has developed that form's taste for brutalism and an unforgiving narrative. When the hammer drops for the third act, Niamh's curse takes a surprisingly grim turn, as the adults can no longer deny what they instinctively know. What's impressive is exactly how far a relatively new feature director like de Van is prepared to push this envelope, and how skillfully. 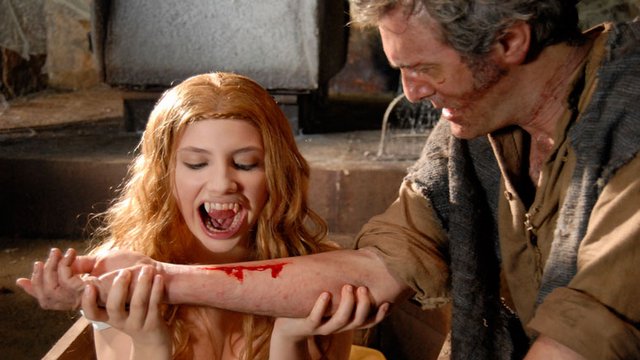 "I'd get that looked at, if I were you." Miriam Giovanelli evokes the spirit of Ingrid Pitt in Argento's Dracula

Conversely, there's a point when you realize that a grand master of the genre can't hack it any more. And with Dario Argento, that moment is pretty much the opening frames of Argento's Dracula (IFC).

Yes, I know, it's Argento. I don't like this any more than you do, but this is a career low point for the man that defined Italian psychosexualsupernatural horror.

Like Dark Touch, the original novel Dracula is really Irish Gothic: the former by setting, the latter because of the nationality of its author, Bram Stoker. While there's still blood pumping in the vampire genre, it's been a long time – arguably since Shadow of the Vampire – that anyone has done anything really interesting with the mythos of Carpathia's least loved son. Argento really doesn't break that mold. The screenplay (written by Argento, veteran modern exploitation producer Enrique Cerezo, horror writer Antonio Tentori and TV scribe Stefano Piani) does a light remix of Stoker's classic novel, but brings nothing truly innovative to the equation. There's an interesting hint of a sub plot (something a younger film maker might want to engage with) about how the villagers deal with they fact that they all know there's a vampire up the hill, but it's only struck a glancing blow here.

Truth is, the bloodsuckers are the most interesting thing here. Thomas Kretschmann (most famous for playing real life Nazis in Eichman and Downfall, and about to become more famous playing fictional Nazi Baron von Strucker in The Avengers: Age of Ultron) has a glacial fury as the count. Meanwhile, Miriam Giovanelli pulls a full-on Ingrid Pitt as Tania, the first of the brides of Dracula. However, the bloodsucking action concentrates on the mortals: Unax Ugalde as a Jonathan Harker so wooden you could make stakes out of him; Marta Gastini as a simpering Mina Harker; And Argento's daughter Asia Argento turning up as the inevitably doomed Lucy.

It's difficult to become emotionally invested in them because they're all cyphers. OK, so that's rarely been an issue for Argento, who has covered over the cracks of some sub-par acting in other films by being a great visual artist. Yet there is nothing in Dracula that will make you think this is the guy that directed Inferno and Deep Red. There are no shocks, no scares, no characters, no great set pieces, no sense of direction.

Arguably, the real blame can't be laid at Argento's feet. He obviously wanted to make a Hammer Horror Film, and that's what he did. Not a great Hammer film, but a Hammer-esque excursion of blood soaked euro-horror. Actually, maybe he was trying to make a spoof: There's one shot of Tania taking a drink from a goblet (you'll know it when you see it) that could have fallen straight out of classic gothic spoof Carry on Screaming!.

Much of the responsibility has to go to another legend of Italian cinema, cinematographer Luciano Tovoli. How the man behind the lens of such seminal Argento works as Suspiria and Tenebre, and later Julie Taymor's Titus, can make something so ugly is astounding. The lighting is flat, even in candle light, destroying any shreds of the Gothic power of shadow. But beyond that, there are basic film school errors, like shots that will leave you screaming "white balance!" that are just inexcusable. Day time sequences are simply bleached – possibly a weird side effect of the fact this was originally shot in 3D – but more likely it's the Tovoli has not adapted to digital.

And as for the CGI … well, final proof, if you can't afford it, don't do it. The practical effects, such as one yokel getting a shovel through the head, or Dracula butchering the village elders in seconds, are simple but effective. But the terrible digitized animals, including an abysmal owl attack, and the worst giant praying mantis since SyFy 'classic' Insecticidal, are laugh-out-loud awful.

You'll quickly hope for respite in the form of Rutger Hauer as vampire killer Van Helsing but the sad fact is that you'll be wading through 72 minutes (yes, I timed it) of blandness and blown-out shots. Even in dirge, there's something unapologetically, wonderfully, understated but over the top about him. Seriously, someone put him a film with Nicolas Cage. Even if it's sub par, at least they'll be entertaining.