Johnny Knoxville gets sentimental with his hidden camera comedy 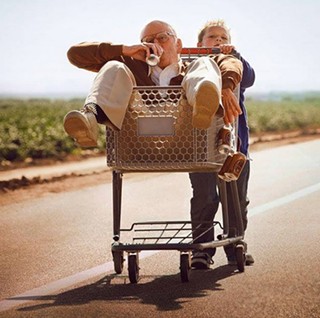 Serious question. How does Johnny Knoxville have any teeth left? Because, between ridiculously dangerous stunts and hidden camera pranks on the unsuspecting public, it's really surprising the big grin is still in one piece.

In Jackass Presents: Bad Grandpa, Knoxville combines both. He plays Irving, a cranky old man who takes unexpected charge of his grandson Billy (Jackson Nicoll.) So far, so bland, but this is the man behind MTV's deranged stunt/concealed camera show Jackass, so there's bound to be something dumb/ingenious/transgressive happening.

It's a weird hybrid, and a lot of how audiences will approach it depends on how they view hidden camera comedy. For most people, it's either a genius and insightful form of humor, or mean-spirited exploitation. But, at the end of the day, everyone in the film signed a disclaimer. And, in that weird, warped, sick way that Knoxville has trademarked, it's actually kind of sweet. It just puts the mirror up to humanity, and sometimes it's filled with nice people, and sometimes it's filled with scumbags.

Like Jackass, there's two parts to the humor. Firstly, the indignities and dangers that Knoxville will put himself through. With age, he seems less likely than before to really put his life on the line (that said, there's one jaw-drobbing stunt with a coin-operated store front ride that is vintage Dickhouse productions.) But then there's the second component, and that's the reaction of the unwitting audience. Where Jackass delivered a couple of dozen quick hit pranks in half an hour, Bad Grandpa delivers elaborate set pieces, like the worst funeral ever. In the midst of this senile madness, what mostly comes out is the general public's need to protect kids. As one concerned citizen tells Billy, "Allow me to take your picture, see if you're on a milk carton somewhere."

Every hidden camera comedy has a sense of danger about it. After all, you can never know how random strangers are going to react. But there are a few moments where you'll really wonder how hidden the cameras are – because when the duo rip off a convenience store, or hang out in a biker bar, or Irving gets wild in an all-male strip joint, there's an undoubted sense that all hell could have broken loose. Knoxville has clearly been doing this long enough that he can, at some level, control the situation. He also avoids the obnoxious and sometimes borderline racist brushstrokes of the other modern hidden camera provocateur Sacha Baron Cohen. But then Baron Cohen has the added cachet of speaking truth to power, while Knoxville is making dick jokes to drive-thru workers in Tennessee.

That said, no-one commits to a joke like Knoxville. Seriously, Bad Grandpa shouldn't just be up for a makeup Oscar. This is some serious acting – real, responsive, playing to the moment acting. Problem is, most awards have gone po-faced, meaningful, and so, so so serious performances. Knoxville is a reminder that there can be real talent and edginess in comedy.

And, honestly, anything that fills pubescent beauty pageant parents in the same horror-filled sense of existential angst that their 'hobby' instills in the rest of the world, then Mr. Knoxville, you have done the world a service.

Metallica – Through the Never (Blackened Records) The world's biggest heavy metal band goes beyond bombast and restores some of their mystique with this combined concert/action movie (read our review here and our interview with band members Kirk Hammett and Robert Trujillo, and director Nimrod Antal here.)

1 (Millenium) A documentary counterpoint to Howard's drama: Narrated by Michael Fassbender, 1 tracks the sport's killing years, when the fight to be the fastest became fatal (Read our interview with producer Michael Shevloff here.)

Cloudy with a Chance of Meatballs 2 (Sony) The disappointing sequel to the surprise animated smash adds a Jurassic Park twist to the oversized food, but it's far from satisfying (read our full review here.)

Last Vegas (Sony) The geriatric answer to The Hangover, even having four Oscar winners in the cast can't stop it losing out on this week's bad grandpa award (see our full review here.)

Treme: The Complete Series (HBO) All four seasons of one of television's most sadly overlooked projects, exploring the slow rebirth and change of New Orleans' culture, post-Katrina.