Miles Teller and J.K. Simmons beat it out in Sundance Opening Film 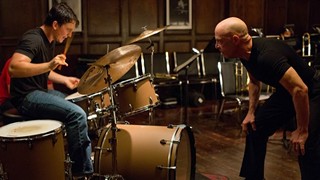 For six years I was in band. I took private lessons; I would practice hours a day; I would neglect things like math homework and cleaning my room. I was extremely close to becoming a music major in college, even auditioning at a university before I decided a career in music was not for me.

That is not the case with Andrew (Miles Teller, The Spectacular Now), a drummer whose love and dedication to the art is all-consuming – and anything but pretty.

From director Damien Chazelle comes Whiplash. Chazelle won the U.S. Short Jury Award for Fiction at Sundance in 2013, and he made it into a full-length feature for this year's festival, where it took home the Grand Jury Prize for Dramatic film.

Andrew is a freshman at the most prestigious music school in the country. While having a late-night drumming session, he sees Fletcher (J.K. Simmons), a feared but brilliant instructor. Andrew gets a glimmer of hope and begins to play for him, but Fletcher doesn't pay all that close attention and departs, leaving Andrew feeling foolish. However, while in class, Fletcher takes over as conductor and offers Andrew a shot to play in his band. Andrew relishes in his accomplishment, yet he has no idea what he just agreed to.

Anxious and excited, Andrew is in for a major wake-up call. Fletcher's rehearsals are not filled with musical happiness and fun; they're more akin to interrogations. Students warm up, chatter, and laugh, but as soon as Fletcher walks in, there's nothing but silence, and the students stand up as if greeting their commanding officer. Calling Fletcher a perfectionist would be an understatement. Dressed all in black, he is the face of intimidation. He tells Andrew the story of Charlie Parker: The only reason he became a jazz great is because Jo Jones angrily chucked a cymbal at his face when he wigged out on stage. This is all the justification Fletcher needs when he imposes emotional and physical abuse on his students; fear is a better motivator than praise. In a performance that's simultaneously incredibly entertaining and horrifying to watch, Simmons delivers every insult with such punctuating tenacity the audience could feel every seething syllable.

For a film about music, Whiplash has a share of bloodiness one might expect from a horror movie. For example, after a rotating drummer sequence that lasted for several hours, each drummer desperately vying for a spot in the band was splattered with blood – which is nothing compared to the state of the drums.

At its core, Whiplash is not a movie about drumming – it's about what one sacrifices to be the best. Andrew lives in a nook for a bedroom in order to fit his drums. He starts dating Nicole (Melissa Benoist), a girl who works at a local movie theatre, but he abruptly ends it because she would just get in the way, and all that would remain would be resentment. In the end, the musician has to ask: Is it all worth it? And for Andrew, the answer is a resounding "Hell yes."