'Sherlock' takes us inside the hearts and minds of its cast

Back to Baker Street, shall we?

As always, we kick off with a cold open – this time on Greg Lestrade's year and a half chase of the Waters gang of bank robbers. He's finally closing in on the culprits, only to be interrupted by an urgent plea – by text, of course – from Sherlock. who, it turns out, needs help writing his best man speech.

And so it begins: the wedding. 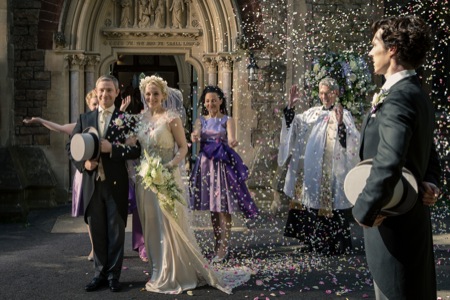 (Or, as Sherlock puts it: "Two people who currently live together are about to attend church, have a party, go on a short holiday, and then go on living together.")

Fans have been simultaneously dreading and looking forward to this episode since the show began, practically. People who know the Arthur Conan Doyle canon knew that John Watson was bound to marry Mary Morstan, but the delightful homosocial relationship established between John and Sherlock in the first two seasons – and keyed on by the showrunners repeatedly throughout – had many fans not-so-secretly hoping this particular duo would turn out to be gay. Which means, you know, a wife would get in the way, or whatever.

The episode, while almost as scattered as the premiere, with scenes of Major Shilcott, flashbacks to Sherlock's meetings with select wedding guests (one of Mary's exes, a particularly intrepid kid), Sherlock's deductions about the male guests for the maid of honor, and – the centerpiece – Sherlock's tangent-filled flashbacks to cases throughout his best man speech. But it does at least ultimately come back to one central case – a case the audience doesn't get clued in on until the third act. 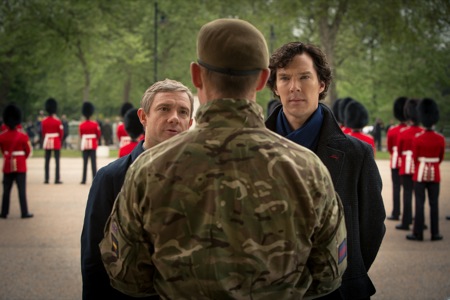 The speech itself gets off to a slow start, to be sure, but includes perhaps the most touching tribute between friends in recent television history. It moves on to stories about John, introduces the case of Bainbridge and the Invisible Man, and tracks the boys as they tour London during John's stag night.

It's more of a character study in this format, which we can't complain about: We get more of Mrs. Hudson's backstory, for example, as well as a better sense of the boys' friendship, John's time at war, and a few important glimpses into Mary's past.

The scenes still feel abbreviated, the transitions jumpy, but when everything finally comes together with only 15 minutes to spare, thanks to a particularly astute observation from a cunning little kid, it's as seamless any of our favorite Sherlock moments of seasons past. 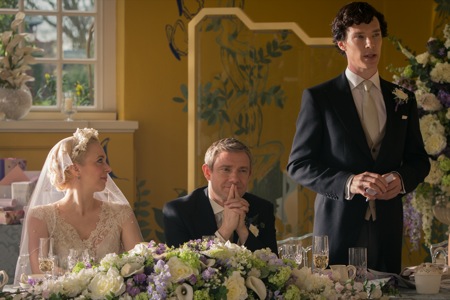 And the coda! Oh, the coda: utterly bittersweet. Sherlock's pirouette put a perfect bow on the apprehension of the attempted murderer, and his "first and last vow" gives way to the title reference and a revelation about Mary… But then, that parting shot of Sherlock shrugging into his coat to leave his best friend's wedding early and alone is almost too much to handle.

Only one more week to go, and it's bound to be as busy as these two combined. What villain waits around the corner now? What news of the happy couple post-nuptials? Will we ever get to see Sherlock break out his dance moves? 'Til then, here are a few miscellaneous highlights and quotable moments from this week. 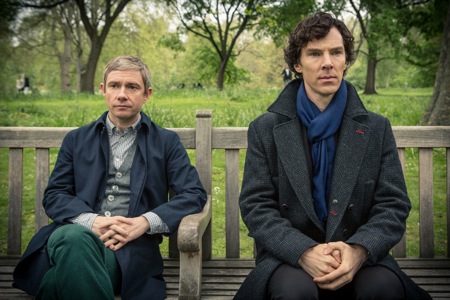 • Mycroft's pronunciation of the word "mingling"
• Sherlock's response when John asked him to be his best man: All he said was utter silence, but all he meant to say was a full monologue about friendship, trust, and emotion.
• Sherlock's confession that he learned his napkin-folding skills on YouTube – and, half a minute later, his sitting surrounded by two dozen of the things
• The horns precisely placed behind Mary's head as she coyly gives the boys the thumbs-up sign before sending them off
• John calling Sherlock nurse
• "Am I … pretty?" John asks as he tries to guess the Madonna card on his forehead
• "The game is … something," a drunken Sherlock announces
• "Egg? Chair? Sitty thing?" fill in where the usual deductive phrases would be in sloshy Sherlock vision
• Sherlock's periodic digs at the institution of marriage, aka "the suffocating chains of domesticity": "A wedding is, in my considered opinion, nothing short of a celebration of all that is false and specious and irrational and sentimental in this ailing and morally compromised world."
• Sherlock's employment of the duo's safe phrase – "Vatican cameos" – for the first time since the scene at The Woman's house
• "If someone could just move Mrs. Hudson's glass just slightly out of reach, that would be lovely."
• "Do you always carry handcuffs?" asked the maid of honor. To which Sherlock replied: "Down, girl."

The finale of the third season of Sherlock airs Sunday, Feb. 2, on PBS as part of Masterpiece Mystery.

Welcome to 'Sherlock,' Where Everything's Made Up and the Deaths Don't Matter
The finale no one saw coming 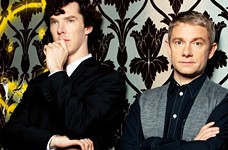