'From Dusk Till Dawn' to See Light of Day

Debut date and all the details on Robert Rodriguez's TV series 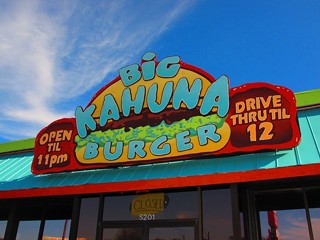 That is one tasty burger: Big Kahuna Burger gets a big role in the new TV adaptation of From Dusk Till Dawn (Photo by Richard Whittaker)

Sharpen your vampire-stabbing stake and strap on your best crotch gun: The El Rey Network has announced when the TV adaptation of Robert Rodriguez's seminal horror-comedy From Dusk Till Dawn will air.

Episode one of the 10-part miniseries will debut on Tuesday, March 11 at 9pm ET/8pm CT.

The show has been filming around Austin for the last few months, and we've had a steady drip-drip of information about the show. Here's what we know already.

Rodriguez is taking his original 1996 splatterfest and adding a lot more material and characters. However, the core remains the same: Two bank-robbing siblings, the Gecko brothers, hijack a lapsed preacher and his two adopted kids, and plan to drive their Winnebago across to Mexico. Unfortunately, there's a bar full of vampires sat on top of a Mayan temple that have other ideas.

However, that's just the starting point. According to the studio, "the series deepens the tone and expands the storyline of the film, adds new characters and backstories, and explores the Mesoamerican mythology behind the creatures inside the club."

That seems to mean that tiny side-references (like Rodriguez dropping a Big Kahuna Burger Easter egg, a nod to his friend Quentin Tarantino's Pulp Fiction) that are becoming much bigger components. There also seems to be a lot more emphasis on the law enforcement subplot, with two Texas Rangers hot on their trail.

Rodriguez is confirmed to direct three chapters so far (episodes one, two, and four). For episode three, he's bringing in Eduardo Sanchez: Most famous for The Blair Witch Project, he's become an indie-horror institution with creepers like Lovely Molly and Seventh Moon, while his segment of V/H/S/2 proves he can do horror-comedy. He's also just been confirmed to direct Intruders, BBC America's new eight-part series adapting Michael Marshall's paranormal novel and set to star John Simm (Doctor Who).

Episode five will directed by Joe Menendez (The Brothers Garcia, Hunting of Man, Ladron). He's got a lot of experience working on kids' TV shows about bands, having directed multiple episodes of both Nickolodeon's Big Time Rush and Disney's Imagination Movers.

The writing team includes Rodriguez himself, his brother Marcel Rodriguez (The Adventures of Sharkboy and Lavagirl in 3-D), Diego Gutierrez (Warehouse 13, Without a Trace) and Juan Carlos Cota (Nikita, Heroes.)

As for the special effects, who could Rodriguez call on but his old pal Greg Nicotero (Predators, The Walking Dead, the original From Dusk Till Dawn and all its straight-to-DVD offspring)?

It's been 17 years since the original film, so Rodriguez probably couldn't just get the original cast together and hope for the best. So while a lot of the core parts remain, there'll be new faces in the roles.

Richie Gecko: Originally played by Quentin Tarantino, TV version by Zane Holtz (Holes, The Perks of Being a Wallflower)

There will also be a bunch of new characters:

Professor Aiden Tanner: Jake Busey (Starship Troopers, Enemy of the State, Identity) as "an eccentric intellectual obsessed with the Mesoamerican mythology behind the vampires"

Texas Ranger Freddie Gonzalez: Jesse Garcia (Sons of Anarchy) as a ranger working with McGraw to hunt down the Gecko brothers

The show has also confirmed Wilmer Valderrama (That ’70s Show) in an as-yet unannounced part.