Recapping the live tour stop and looking ahead to tonight's premiere

“I hope you know how to sign filthy, filthy words.” Turns out, they do. Turns out they can also sign “danger zone.” All of which came in handy for the debauchery that followed.

In the script, the Isis gang takes Pam to Austin for her bachelorette party. She’s not actually getting married, but she wants to know what a bachelorette party would be like. This confuses Cheryl. Archer explains: “No [Pam]’s not getting married because she’s too beautiful and vivacious for one man or woman. Or a man and a woman – cause she could totally pull that off.” As they set off for “the best titties in town” at Chicas Bonitas, Dr. Krieger ad-libs lines that aren’t nearly as funny as Pam’s, while Lana admits she wishes she “could be as beautiful as Amber.” At that line, Tyler offered the editorial change “as beautiful as Pam”? Nash rejected it. In the end, the crew never makes it to the strip club, which Pam is okay with since she brought her favorite spices: Salt-n-Pepa. Half the cast then broke out in a booty dance to “Push It,” while the other half threw dollar bills. At the end of the reading, Tyler collected the money, saying, “I’m going to keep these dollars bill in my butt crack the whole show, and then give them to a ‘lucky’ audience member.” And she did.

For the most part, their network shares the cast’s sense of humor. Thompson said the only time FX has ever said anything was after the episode in which they threw the wee baby Seamus. Considering all the things the baby went through leading up to that scene, it does seem odd. “Tattoo the shit out of a baby, but don’t throw him,” Thompson said.

The cast shared a few other tidbits during the Q&A. For example, Nash talked about her favorite Archer cosplay. “One of my favorite things is when I go to a con and there’s a very large man dressed as Pam,” said Nash. “Man Pam is my favorite.” And the crew decided that Tyler most resembles her character in real life. Although they based this almost entirely on Benjamin’s observation that she has sex with a white guy. “I do have sex with a white man and occasionally get spanked with a Ping-Pong paddle,” said Tyler. “So think about that later when you’re masturbating.”

In addition to the faux Austin script reading, the cast read an actual scene from season five, which premieres tonight. And during the Q&A, Thompson answered questions likely sparked by recent interviews, like this one, in which he cites a drastic departure from the show’s direction so far. Warning: spoilers follow!

Season five kicks off with the FBI blowing up Isis headquarters because the government never sponsored the organization. (Dukes!) Left without spy credentials, the gang has to find a new livelihood. They turn to obvious option: cocaine trafficking. During Saturday’s show, Thompson said a love of Blade Runner influenced the style of the first four seasons, which take place largely in the late Seventies. Season five has a much more Eighties feel, which Tyler called “a mashup of The A-team, Scarface, and Breaking Bad.” Episode two even debuts the season’s whole new Eighties-themed intro sequence.

Before leaving the stage to a standing ovation, Thompson jokingly offered the budding writers and film students in the audience some advice. “This is what not to do,” said Thompson. “Don’t take a successful show and change everything.” No need to actually worry though. The season five clips they showed killed. 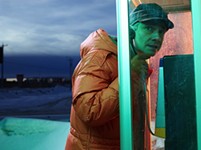