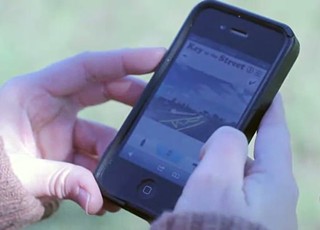 Key to the Street

When it comes to being civic minded, it can be an uphill battle. Remember when you found out some nations censor media? Did you protest in solidarity? Remember that time you saw a road with a much-needed bike lane and didn't email your local representative? Who has the time? Luckily, two Kickstarter campaigns are trying to help.

Operator is an attempt to end Internet censorship. Sounds like more than a one-man job, but it really only took UT PhD candidate Brandon Wiley. He's created a way to mask censored information as benign web traffic. How he does this is rather technical, but he managed to convince the Nerd Nite audience this past week at the North Door and did a great job at explaining his program in the process. Check out the video from that event if you want to know more.

The program itself, however, is not very user friendly. Enter Wiley's Kickstarter campaign. He's looking to raise $35,000 to create a blog reader (like the now-defunct Google Reader) that also performs his information-masking slight of hand without any work on the user end. Rewards include a TX Chip compilation CD, custom T-shirts, and silk screened posters from Party Time! Hexcellent!

Local startup Key to the Street isn't thinking quite as big, but they want to make cities more livable by offering city-planning tools to everyone. The team has been making waves in the tech scene at SXSW Interactive, Tech Ranch, and the Social Good Summit, but they're tapped out financially and are looking for $10,000 to complete the project and release it to the public.

The web-based platform allows users to photograph, sketch, and leave messages about things they think can be improved in the city around them. See a good place for a pedestrian bridge? Take a pic, doodle a bridge, leave a quick message and send it to a database that can be used by city planners and policy makers to help guide their decisions. The functionality can be expanded to include disaster relief with Key to the Street being used for pinpointing problem areas quickly.

Key to the Street's Kickstarter campaign only has four days to go and will host a Kickstarter closing party on Sunday, Jan. 12, 4-9pm, at Austin Beer Garden Brewing Co. (1305 Oltorf). The event will feature city employees and other professionals talking about how the service can improve our city. There will also be live music, bingo (!), and a silent auction.

No more excuses. Time to participate!