From 'Breaking Bad' to 'Bunheads,' this list has it all 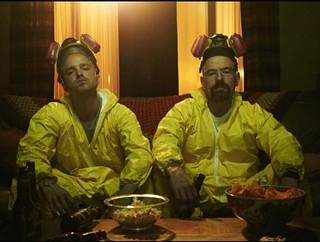 Editor's Note: Our annual top 10s issue always includes a comprehensive grid of the Chronicle critics' favorite (and least favorite) films of the year, but this year we set writer Aleksander Chan loose on building his own version for television. Here's what he came up with.

1) Breaking Bad (AMC) Duh. The finale was garbage, but the story of Walter White's last breaths was criminally good.

2) The Good Wife (CBS) Morally strenuous, narratively ambitious, this true legal thriller takes on Reddit and Bitcoin with serious panache. The one network show you have to watch.

3) Enlightened (HBO) R.I.P. to Mike White's short-lived but nonetheless lifelong lesson in trying to understand what it means to be a better person.

4) Black Mirror (Audience Network) This Twilight Zone about the "way we live now" was one searing indictment of how technology has made us colder than machines.

6) Orphan Black (BBC America) To compete, the modern woman takes on a number of roles – Tatiana Maslany plays them all (and frequently at the same time) in this sci-fi clone blitzkrieg.

7) 30 Rock (NBC) Liz Lemon's parting words never rang truer: "You frustrated me and you wore me out, but because the human heart is not properly connected to the human brain, I love you."

8) Orange Is the New Black (Netflix) Is it possible to love (and loathe and laugh at in elliptical, sympathetically human turns) every single character in a cast? Yes.

9) Mad Men (AMC) Long has Don Draper masqueraded as a Jay Gatsby with Jon Hamm's jawline, but in the period drama's penultimate season, we're finally starting to see through the facade. Plus: Bob Benson!

10) Scandal (ABC) What transpires on Shonda Rhimes' D.C. freakout is, as you've heard, totally insane – all the easier to make its sophisticated, nuanced dicing of racial, sexual, and identity politics seem totally sane by comparison.

The Rest of the Best (and Worst)

WORST SHOW
Dexter's spirit, unlike the murderer himself, was killed in the show's final season.

WILD CARD
I sort of hated Bryan Fuller's Hannibal at first, and I still think the umpteenth take on Thomas Harris' psycho psychologicalist, while better than how it started, is still overdependent on using visual wonder as emotional shorthand. But damn, this show is beautiful.