Farewell to the King of Grindhouse

Mike Vraney, founder of Something Weird Video, dead at 56 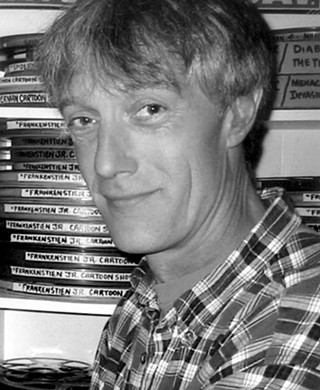 Mike Vraney, founder of the massively influential Something Weird Video

It's a truly sad week for cult cinema. Mike Vraney, founder of the era-defining Something Weird Video, died Jan. 2 at the age of 56.

Vraney's importance in the preservation and celebration of exploitation, grindhouse, drive-in and z-grade movies can not be overestimated.

For music fans, the Pacific Northwest native may be most famous as a cofounder of Seattle's The Showbox, and later as manager of punk bands including The Dead Kennedys, TSOL, and The Accused. But it was a film fanatic – in the truest and deepest sense of the words – that he made his biggest impact.

As a teenager, he worked in the Bel-Kirk Drive-In in Bellevue, Washington, then became a projectionist at Seattle's Green Parrot Theater (a notorious 24/7 grindhouse and x-rated theater) and the Apple Theatre.

After that first haul, he was lucky enough to get access to the archives of exploitation king Dave Friedman. That was just the beginning, as he unearthed over 2,500 titles. The massive collection he gathered and transferred to video and then digital became the Something Weird archive.

These were films that no-one cared about. Rough, often amateurish, scarcely likely to make it into the Cahiers du Cinema. But to Vraney they were "very pop culture, Americana, adult-oriented but soft, not hardcore, fascinating stuff." He championed them, and gave them the life they deserved. He kept them on screens.

Now let's put this into context. With the endless depravity of the Internet, it's pretty easy to find pretty much any obscure title you want somewhere. And living in Austin, the new home of grindhouse culture, between Terror Tuesday, Weird Wednesday and some special programming from the Austin Film Society and Cinema East, there's no shortage of ways to satiate your lust for nudie cuties, rubber monster flicks, stag loops, euro erotica, and duck-and-cover PSAs. But in the 1990s, it was Something Weird that helped keep the legacy of underground icons like Friedman, Herschell Gordon Lewis, and Doris Wishman alive. Vraney put titles like Assassin of Youth and Blood Feast on the shelves and got them into people's hands.

He was also a historian, unafraid of highlighting some of cinema's seamier corners (while Disney buried Song of the South, he was still selling Goona-goona flicks.)

And it was done without pretension. Today there are dozens of imprints like Something Weird, rustling through old warehouses and garage sales in the hopes of finding something lurid. Some enjoy the sleaze, some celebrate the artistry. But Vraney kept the day-glo filth of it all in tact. With their vibrant, cartoonish covers, salacious photography and that distinctive swirling logo you could recognize a Something Weird title from a mile away. They were broken out at parties like the rarest contraband or an arcane artifact of a by-gone era. Even the catalogs were a lesson in film history.

It was a demanding life's work. As Something Weird put it in their obituary on Facebook, "making 370 two-hour volumes of Nudie Cuties loops is a good example of this. Who does that?! Mike Vraney!"

In recent years, he had also become a documentary producer. In 2010, he released Herschell Gordon Lewis: The Godfather of Gore, followed last year by That's Sexploitation!, the definitive history of sinful cinema.

Vraney is survived by his wife and business partner, Lisa, and children, Mark and Danielle, and by a cinematic legacy that has joyously warped a generation of film fans.