The Trials and Success of Tom Laughlin's 'Billy Jack'

Politics and pacifism on the East Coast 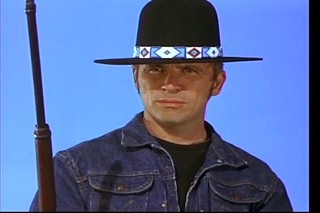 Years back this would have been much bigger news than it was, but time does affect the stature of cultural archetypes. Laughlin had played Billy Jack in four movies. Two of them were huge box office hits, though critically they were far less successful. They not only attracted huge audiences but also had an enormous impact on the way the film industry distributed and promoted films.

There was a time when awareness of Billy Jack, the film and the character, was not simply commonplace but part of the ongoing dialogue. How much this has changed was brought home for me just a few months back when telling two friends the story at the end of this piece. I realized early on that neither of them, both very sharp and hip thirtysomethings, had any awareness at all of Billy Jack, which was completely unexpected.

Billy Jack was a half-Cherokee Vietnam Green Beret veteran clad all in black, except for his jean jacket, including his distinctive hat. A skilled hapkido martial artist, Billy Jack was a pacifist supporter of Indian rights and the counterculture who was willing, though only when forced, to whop the hell out of anyone who threatened them.

He first introduced the character in Born Losers (1967), regarded by many as one of the finer biker films. But Billy Jack, released in the early Seventies, was Laughlin's real commercial breakthrough. As challenging and controversial as the narrative and the theme of the film, its production and distribution histories are even more remarkable.

In the film Billy Jack is an animal rights activist protecting wild horses while also championing a hippie progressive Freedom school in the desert near a very conservative Arizona town. The students at the school are a multiracial, co-ed group of free spirits. They are frequently the victims of local youth who target them for taunts, violence, and eventually rape and murder. The gang is lead by the sheriff's son, whose dad not only has no use for the community but is the villain behind the slaughtering of wild mustangs to be sold as dog food.

Having foresworn his violent past, Billy Jack is sorely tried by the community's assault on the school's population. Eventually he just can't take it any more. In one of the film's more famous scenes, he confronts a group of local bullies who have been picking on some students from the school. Beginning calmly, he tells them, “I really try … but when I see this girl of such a beautiful spirit so degraded, and this boy, that I love, sprawled out by this ape here, and this little girl, who is so special to us that we call her God’s little gift to sunshine …." As he continues he keeps getting angrier: "… and when I think of the number of years she’s going to have to carry in her memory the savagery of this idiotic moment of yours, I — just — go — berserk!” Then he beats the crap out of them, until they can outnumber him and turn the tide.

The film openly espouses alternative counterculture politics as well as explicitly naming the enemy, specifically the Nixon administration and the Bureau of Indian Affairs. In so many ways, it has its cake and eats it too, championing nonviolence and Native American spiritualism in a narrative that is accentuated by frequent acts of vigilante justice – but only, of course, in response to great provocation. Billy Jack's use of martial arts was innovative at the time. The film struck an amazing chord among the country's youth, especially college students and the socially committed. It was not just a box-office hit but a film that resonated culturally and politically.

The film's most lasting influence, however, may turn out to be its story as a commercial theatrical production and release. Central to this is that the film was produced, written, directed by, and starred Laughlin and his wife Delores Taylor, using a number of different pseudonyms.

Originally financed by AIP, filming began in 1969. Soon, because of conflicts with the filmmakers, AIP withdrew its funding. Avco Embassy arranged to step in but at the last minute withdrew its offer. Then 20th Century Fox came on board with the money to finish the film. After the film was shot, there was a conflict with the studio over the direction editing was taking. Laughlin stole the soundtrack from the lab so the film couldn't be finished. Having Fox over a barrel, he got the studio to sell him the film. When it was completely finished, he took it to Warner Brothers, which brought and distributed it.

There are a number of different versions as to what happened next. The film either did disappointing business or, while stiffing in big cities, proved a monster in smaller markets. Regardless, the Laughlins, dissatisfied with Warner's efforts, sued them for over $50 million. Eventually they settled out of court with Warner agreeing to re-release Billy Jack in 1973 with a huge publicity campaign.

This is where the story gets really interesting. Warners and the Laughlins test-marketed the film in 65 theatres in Los Angeles, with a new expanded marketing effort. The film was a hit. They then expanded this effort to a number of other major urban centers. The film continued its extraordinary showing. Eventually it was expanded to a national run, where it did phenomenally, although exact figures vary from source to source.

Billy Jack ends with the protagonist accused of two murders. He gives himself up for trial by demanding certain conditions to which the authorities agree to abide. The unimaginable success of the film made its sequel, The Trial of Billy Jack (1974), almost unavoidable – well, at least to the Laughlins. Within the film business, this was by no means seen as such a sure thing.

At the time carefully scaled platformed releases were the norm, slowly opening a film across the country in a planned geographic pattern. Laughlin not only went for a wide-scale national release but supported it with a massive, nation-wide advertising campaign especially reliant on television, which was unprecedented at the time. The film was a hit, though not on the same level as its predecessor (actual reliable numbers here are also hard to find, with different sources varying on the results). Jaws, released in 1975 specifically following this model, became the highest-grossing film up to that time.

The filmmakers would follow it up in 1977 with the cleverly titled Billy Jack Goes to Washington but the film was never released.

Billy Jack is actually hackneyed, self-righteous, and overly proud of its holier than thou politics. Combining watered down Native American mysticism, pasteurized new left politics and simplistic Mother Earth-loving environmentalism, the film was ignored by activists and dismissed by critics. The conflict at the heart of the film between its pacifist preachings and overtly violent content can't be ignored.

Cut to Charlotte Harbor, Fla., on the state's Gulf Coast, south of Sarasota and north of Naples. Through a series of circumstances I ended up there for about three months in 1973 volunteering in a youth center and earning money working at a warehouse a couple of days a week.

In Boston, where I lived before landing in the Sunshine State, I had mostly hung out with hardcore politicos, committed leftist activists, including a more than casual relationship with a Cambridge Weatherman cell. Florida proved to be stifling in any number of ways. This shouldn't have come as much of a surprise, but I was really not given to thinking things through in those days. The complete lack of dialogue wasn't limited to politics but included almost all relevant, meaningful topics. It was not a good time to absent oneself from the national discourse, especially after having been so involved in it for more than half a decade. Eventually I left the state by driveaway car, having to pull over to the side of the road after I crossed the border into Georgia because I was laughing so hard in relief at leaving the state.

Towards the end of my stay there, my brain having been wrung dry by being deprived of any nourishment for months, Billy Jack came to the sole theatre in town. When I went to see it, the film blew me away. It was awash in left-wing politics, social commentary, and controversial ideas. Leaving the theatre wired and excited, I couldn't sleep and spent hours pacing alongside the river.

When I returned to Boston, I was astonished that none of my friends knew of the movie. "But it's the American Godard," I insisted. "It represents the birth of a new radically left American cinema!" Vehemently I dragged over a half dozen of them to a showing of the film. Watching it among them, away from the intellectual blank-wash of Florida, I couldn't believe what I was seeing. It was like watching a different film. What had seemed so sharp now was so dull, what had been telling was painful. It was more obviously lame than it had ever seemed profound. As we watched it, I sank lower and lower in my seat, trying to figure out how I could make my escape without being pummeled, at least verbally, by these hardcore, confrontation-hardened movement veterans.

I had sunk pretty far down when I realized I was hearing a strange, unexpected sound. My companions were all laughing, harder and harder. Watching the film, it never occurred to any of them that I had been anything but kidding in my praise for the film. They appreciated my trying to leaven the somber atmosphere of the times by dragging them to this film so painfully sincere and completely misguided as to be almost satire. Not one gave me grief over the film, but for a long time after they would chortle whenever the title came up.

Once I regularly used to tell that story but less and less over the years. Maybe because – even though I didn't realize it – Billy Jack was fading from cultural currency. When I commented on Laughlin's death, to more than a few people Billy Jack was unknown. Although it probably shouldn't have, this further surprised me. It reminded me of a time waiting on line to buy ice cream in Chicago when the young lady behind me asked her date if he had heard of Cary Grant. He hadn't. A world without Cary Grant is a lot emptier than a world without Billy Jack.

Still, will the death of Tom Laughlin even further close the door on that chapter of our shared history? I sometimes wonder if any of those folks who saw Billy Jack with me in that Boston theatre that evening ever think back on the film. And, if they ever do, are they smiling?