Rummaging through the 'how did we miss this?' files 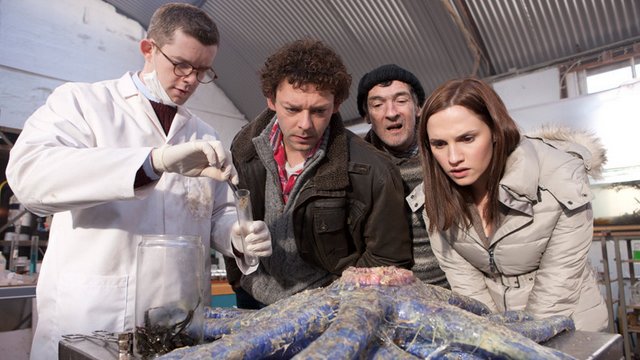 Does this calamari look cooked to you? Russell Tovey, Richard Coyle, Lalor Roddy and Ruth Bradley ponder one of the Grabbers

From The Blob to Slither, nowhere is more dangerous than a pleasant little town. As Garda Lisa Nolan (Ruth Bradley) so succinctly puts it in Irish comedy-horror Grabbers, "It's always the quiet places where the weird shit happens."

I'll admit, and you may have noticed, but Grabbers has actually been out on DVD for a couple of months now. But with the year dragging to a close, it's time to clear the decks and the shelves of a few titles that slipped by unreviewed. Grabbers leaps to the top of that pile by sheer dint of being joyous, ridiculous, squishy, fun, like Gremlins with tentacles.

Grabbers is predicated on one popularly-held belief about the Irish: That they're all charming drunks. In fact, if they weren't charming drunks, in this film, they'd all be dead. A terrifying alien species, a squid-like beast with a taste for human blood, has crash-landed off the Irish coast. The only defense against it seems to be its intolerance to ethyl alcohol. As in, booze. As in, the national drink of the emerald isle. Can a small island of extremely drunk farmers and sailors hold off an intergalactic vampiric invasion before their livers give out or (even more perturbing) the pub runs out of beer?

Nolan is a serious member of the Irish police: So serious that, instead of taking an actual vacation, she fills in for a holidaying officer on the remote island of Erin. Her short stay seems to be complicated by a love triangle between herself (as seemingly the only single woman on the island), borderline alcoholic cop Garda Ciarán O'Shea (Covert Affairs's Richard Coyle) and posh British marine ecologist Russell Tovey (last seen in these parts heavy drinking through the sealed bottle thriller Tower Block.) And then, to complicate matters, there's an alien invasion.

Part Jaws, part Attack the Block, part charming if forgotten Irish comedy Waking Ned Devine and with a wonderfully overt nod to Aliens, Grabbers isn't trying to re-invent any wheels (good, because it's too drunk to drive anyway.) But it's got charm, humor, and splendid turns from the indominatable Bronagh Gallagher (Tamara Drewe, The Commitments) as Una the overly-inquisitive pub owner, and Lalor Roddy as the definitive comedy Irish alcoholic.

Moreover, it's got the most essential ingredient of a good creature feature: splendid creatures. Low- to mid-budget monster movies often foul their own nest by botching the monster. That goes doubly so when they're depending on CG, which can age so badly. Yet Grabbers ' grabbers are spectacular: every spare penny seems to have gone into their pinwheeling, roaring, flipping and flopping frames.

And while Tovey and Coyle have already established their comedic credentials, this is seasoned TV actress Bradley's international calling card. Frankly, she's hilarious. "Comedy drunk" is tough to pull off without dropping into caricature, so she embraces it proudly. As she so adroitly proclaims, "Funulariforf. Snarf." 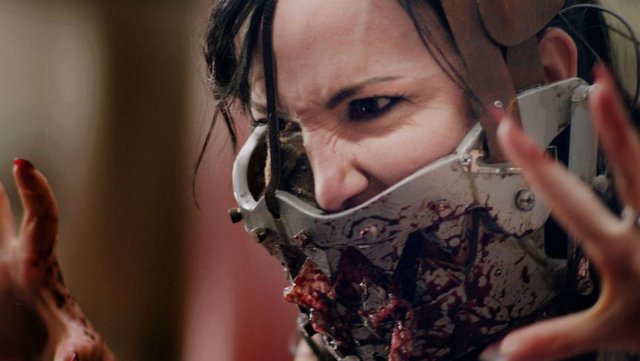 No, not Saw cosplay: The "Taste" segment of anthology horror Chilling Visions: 5 Senses of Fear

Everything about Grabbers is fun, punchy, scary and simple. The wonderfully awkwardly titled (deep breath) Chilling Visions: 5 Senses of Fear is much more erratic and scattershot. Originally created for the Chiller network, it's the latest entry into the growing modern horror anthology canon.

It's a pretty simple gimmick acting as connective tissue. Each installment picks one of the five senses, and develops a free-standing shocker. Distinguished mostly by the youth and relative inexperience of most of its directors, there's an automatic local interest with Emily Hagins (the Austin-based director of My Sucky Teen Romance and SXSW fave Grow Up, Tony Phillips.) That interest actually pays off. "Touch" – the story of an unnaturally acute blind boy (played by Tony Phillips' Caleb Barwick) trying to find help after his parents' car crashes – may be her most efficient and accomplished work to date. Inspired by the Texas School for the Blind and how its students learn to navigate the world, she builds up the simple tension of having a protagonist for whom every step is potentially deadly. It's neat, tense and concise, and would function well as a stand-alone short.

Unlike many anthologies, which just lump a bunch of unrelated shorts together, 5 Senses builds up its own minor mythology (watch for the "W" logo scattered through the segments), and there is an undercurrent of connection. It goes beyond recurrent characters of motifs: "Touch" picks up the narrative strands of ocular horror "See" (the directorial debut from 90s go-to horror/action kid Miko Hughes of New Nightmare and Mercury Rising infamy.) Meanwhile Madison County creator Eric England's straight-forward gore trip "Taste" is a direct prelude to "Listen", with the real sense that the narrative is going somewhere. Unfortunately, the not-quite-gruesome-enough "Taste" is pretty bland, but at least it serves as a fitting prelude before the whole affair ends with a mighty bang.

The creepiest segment by far is the closer, "Listen" from Jesse Holland and Andy Mitton (Yellowbrickroad) is clearly and forgivably inspired by the VHS series. Their found footage tale of a lost composition that kills through musical progression would have fitted admirably into VHS 3 (if/when that happens), playing intelligently with the idea of editing and remix culture. Considering how much of a DVDanger favorite that franchise is, that's as close to a must-buy recommendation for indie horror fans as you'll get.