A Chilling Time at the Drafthouse 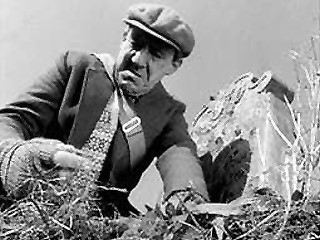 Michael Hordern uncovers something eerie in the BBC's adaptation of M.R. James' "Whistle and I'll Come to You, My Lad."

For every light on the Christmas tree, there is a shadow. That's the dark side of the season of giving, and it's what M.R. James understood.

In America, horror is for Halloween, and Christmas is for family and happiness. In Britain, the two merge. It's in the fog and the mist, the skeletal trees and the long shadows cast by a sun that barely glimmers over the horizon. The tradition of the festive fright may arguably have begun with Charles Dickens and A Christmas Carol, but Montague Rhodes James, to give him his full name, is the acknowledged master of the Christmas ghost story.

Tonight, Dec. 23, two nights before Christmas Day, the Alamo Ritz will screen two of his best stories in two of their finest adaptations: The BBC's classic versions of "Whistle and I'll Come to You", and "A Warning to the Curious."

It's another part of the holiday horror tradition. The BBC began its James adaptations in 1968 with a version of 1904's "Whistle and I'll Come to You, My Lad." Directed by the great British polymath Jonathan Miller, it starred revered British character actor Michael Hordern. He is probably best known as the fusty Englishman caricature in broad comedies like A Funny Thing Happened on the Way to the Forum and Up Pompeii, or as the narrator in Watership Down. But in "Whistle" he played the archetypical James protagonist: An academic, usually an antiquarian, archaeologist or historian, who uncovers an ancient evil. There's no gore or explosion or supernatural violence. Instead, it's a flicker out of the corner of your eye, something that looks like a person, but moves like a crow or a flapping rag. Something … wrong.

It's an idea that James revisited time and again, and in lesser hands it would have become a dried-out fossil of a narrative, reduced to a gimmick in a couple of tales. But the tales were as rich and diverse and shadow-drenched as British history itself. It was also a world he knew well. Think of him as the ghastly version of JRR Tolkien. The creator of The Lord of the Rings was, at heart, an academic fascinated by the cultural significance of language. James was a medievalist and archivist who discovered (much like many of his characters) lost manuscripts and undertook pivotal translations of major works.

And then every Christmas he would scare his colleagues and his audiences with another tale of the uncanny. Between 1904 and 1925, the Cambridge don published four volumes of the supernatural. For generations, it wasn't Christmas without a good fright.

His stories have inspired dozens of writers to send a chill up his spines (H.P. Lovecraft was a fan and peer.) And while there have been few film adaptations (save the every-chilling 1957 sorcerous terror Night of the Demon, taken from "Casting the Runes") his sense of turn-of-the-century Gothic has pervaded cinema for decades.

Yet it was on TV that his legacy has lingered longest. Decades after his death, the BBC has summoned up his spirit year after year. The classic run begun by "Whistle" may have finished in 1975 with "The Ash Tree": Yet the lure of his his tales was too strong to resist. 1986's season of giving got a scary gift when Robert Powell performed a series of dramatized readings. Then in 2000, the mighty Christopher Lee loaned his sonorous tones to a resurrection of the tales, with four new half hour dramas from the master. More recently, there have been sporadic Christmas tales, including a second version of "Whistle", starring John Hurt. This cold season, British audiences will be lucky enough to see a new adaptation of "The Tractate Middoth", directed by Auntie Beeb's favored horror and mystery writer Mark Gattis (Sherlock, Doctor Who.)

So until that new version arrives on American screens, tonight's dark mysteries will be a modern insight into older terrors.