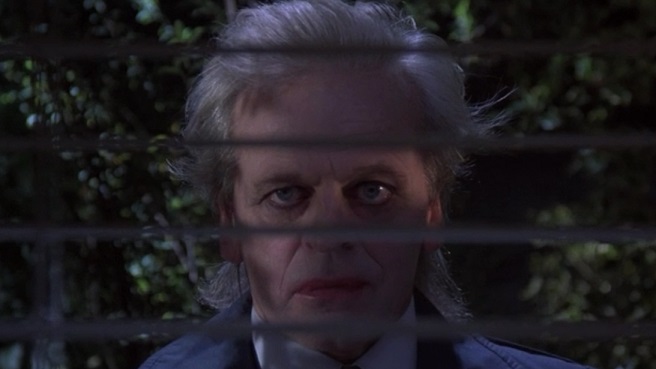 Klaus Kinski as the worst landlord ever in Crawlspace, re-released by Shout! Factory

Don't you hate it when you' can't spend any quiet time in your apartment, just because your landlord if a near-albino Nazi surgeon with a penchant for murdering his tenants? And you can't get away for a road trip, because the people in the caravan park are on a killing spree?

Most horror films at least tease who the bad guy is. Not bizarro mousetrap creeper Crawlspace (Shout! Factory). Writer/director David Schmoeller clearly realized that the entire audience will go, "Gah! It's Klaus Kinski! Gah! Run away! Run Away!" As murderous ex-surgeon turned landlord Gunther the legendary German actor fits in nine reels of crazy in the first five minutes. He kills a tenant after she finds his collection of caged rats (oh, and another former tenant whose tongue he severed and who he now keeps around for company) and then he plays a quick solitary round of Russian Roulette with a bullet with his name on it.

Technically, there isn't a crawlspace: Gunther spends all his time shuffling around in the heating ducts like a wild-eyed John MacLane in Die Hard, booby trapping the rooms and furniture, all the while impotently spying on his neighbors through air vents. Kinski keeps Gunther clinical, with even his weapons of death having a sterile feel to them. And then he goes bonkers for a few minutes, smearing stolen lipstick across his face and doing a passable imitation of late-era Genesis P. Orridge.

Made in 1986, it's hard not to see its influence on a host of later house-as-torture-chamber shockers like the Saw franchise, The Collector and even the Japanese gorefest Evil Dead Trap. It's familiar territory for Schmoeller, since seven years earlier he built a similar killing machine in Tourist Trap (although that had a psychic hillbilly, rather than a psychotic son of a Nazi surgeon.) Similarly, the creepy stalker side of the narrative was first exposed in his 1982 sexploiter The Seduction. Fortunately, he later abandoned any pretense of psychological depth a couple of years later with the deliciously gonzo Puppet Master.

Crawlspace looks like a PG-13 slasher movie, but it's really closer kin to that 70s/80s subgenre of domestic Nazi movies. World War II was still close enough to be a recent nightmare, and the idea that the Rich was still close by. Audiences were getting more aware of the US' Nazi relocation program Operation Paperclip (thus Gunther's comments about a childhood in Argentina), and The Boys From Brazil raised the specter of eugenics in a fictional setting. The creepiest sections of Crawlspace are bloodless, as Gunther recounts his diary of a Nazi lineage. "I am my own god, my own jury, my own executioner. Heil Gunther!" he intones with the megalomania of the self-declared master race.

Take out Kinski, and it's a pretty typical Charles Band crowd pleaser. Most of the deaths and mutilations take place off-screen, so it's not going to please the gore audience too much. But it's got Kinski, and even Kinski phoning it in is more disturbingly entertaining than most actors on their hardest working day.

Shot in the middle of his weird barren years, after Hollywood had vainly tried to turn Werner Herzog's muse into a conventional movie star, it's clearly beneath him. He's seemingly in on the joke (there's even a nod to the far superior Nosferatu the Vampyre in his exchanges with Talia Balsam as Lori, the cypher of a last girl.)

Yes, he was an incorrigible asshole, but he was also a force of nature on screen. As an extra, Shout! includes Schmoeller's monologue/short "Please Kill Mr Kinski" (his own version of Herzog's My Best Fiend), in which he recounts how close to Kinski came to being killed by both the crew and the producers. Yet Schmoeller endured the abuse, just because there is still something magical about the madman. As FX director John Vulich notes in a brief interview included here, "You can't direct Kinski, you can just document him." 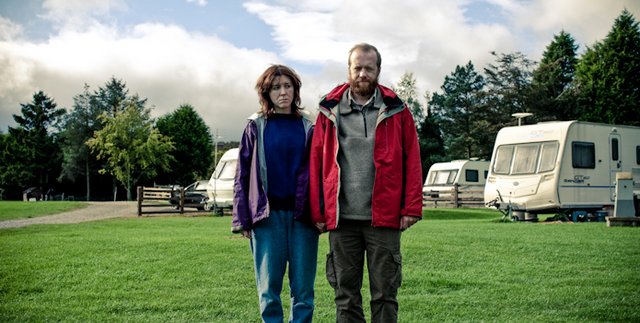 If you can't stay home in safety, there's always a nice little trip around the countryside. Unfortunately, as Ben Wheatley's new murderous comedy Sightseers points out, at least when you're at home, you know who your neighbors are. On the road, it could be any lunatic.

Moreover, the killers of Sightseers don't have Kinski's wild eyed stare. Instead, they have bobble hats and a car that's not overly fuel efficient. British TV comedy mainstay Alice Lowe (Tina) is a dead ringer for classic Dr Who companion Elizabeth Sladen, and plays Tina with a pinch-mouthed lunacy. A 34 year old virgin who lives with her mum, her idea of rebellion is risking an extra-strong mint. Comedian and Lowe's co-writer Steve Oram, resplendent with a huge ginger beard as the unbalanced Chris, is her odd new boyfriend. A little intense, put pleasant enough. The pair are taking their first holiday together, much to the annoyance of Tina's far-from-doting mother. "I know some people who've had some horrible experiences in caravans," warns Carol (Eileen Davis.) She's not kidding.

It's the typical, traditional British travelling holiday. A nice cup of tea, a nice afternoon at the Blue John Mine, and then a little bit of hanky-panky in the fold down bed in a caravan. This all get ruined when Chris accidentally knocks over some bloke at the tram museum. Well, he did deserve it. He had dropped some litter in a restored tram. But how accidental was it? And why isn't Tina more upset about it?

The pair launch on the most low key, inane and darkly hilarious killing spree in cinematic history. This is Badlands mixed with The Trip. Except there's no '59 Caddy or aspirational Land Rover. Instead, the deadly couple are touring through the muddy fields of a Yorkshire summer in a small caravan being pulled around by a well-traveled Volvo estate car. Tina and Chris are the polar opposite of Kinski's Gunther: To look at them, you'd never know they beat people to death with rocks or push them off cliffs. There's something splendidly mundane about their misadventures, like they could give it all up in a heartbeat and take up macrame instead.

Wheatley (Kill List) has become the face of British working class horror, shooting with the low-key, drained-out palette of Ken Loach and Mike Leigh. A lot of obvious comparisons have been made to Leigh's Nuts in May, but there's more than a few nods to classic British saucy comedy Carry on Camping. Much as Kenneth Williams and Hattie Jacques found in that ode to the horrors of the outdoors, no matter how far you go to avoid people, there they are.

He also retains the black-bleak humor that distinguishes the North of England. Sightseers is inherently imbued with a class consciousness about the fears and concerns of the most petite of the petite bourgeoisie (Chris and Tina's victims are all either rude oiks or supercilious quasi-intellectuals) There's an air of ridiculousness that lightens the drama without undercutting it, much as he did in low-key crime drama Down Terrace. But there are also traces of the hypnotic mysteries and mysticism he conjured in the upcoming A Field in England. Moreover, he has a rare eye for the subtle beauty of the North, with its sweeping hills and heather-covered moorlands. Even when his characters are busy pushing people off some very scenic cliffs.

Sightseers (IFC) is out now. Crawlspace (Shout! Factory) will be released Dec. 17. Next week on DVDanger, part one of the end-of-year shelf-clearing.