'Before Midnight' and 'Dallas Buyers Club' get some HFPA lovin'

The Hollywood Foreign Press Association announced their nominees for the 71st Annual Golden Globes yesterday morning. Although the prime suspects were on the bill, such as the star-studded American Hustle and Steve McQueen's historical drama 12 Years a Slave, some local flavor can also be seen on the list.

Austin's favorite bongo-player Matthew McConaughey garnered a nomination for his turn as Ron Woodruff in the biopic Dallas Buyers Club. McConaughey plays a drug-addled, homophobic, rodeo cowboy who learns he has AIDS and is given 30 days to live. The film is based on articles that appeared in The Dallas Morning News written by University of Texas Journalism professor Bill Minutaglio.

Although always regarded a cinema auteur, not to mention a Best of Austin winner for Best Local Filmmaker, Richard Linklater did not obtain any nominations for himself for Before Midnight (not cool). However, Julie Delpy, who plays the French beauty Celine in the Before trilogy, did get a Best Actress nod, in the Musical or Comedy category. It was nice to see the film recognized at least in one way.

Both McConaughey and Delpy also received Independent Spirit Award nominations for their work. Hopefully Oscars will be calling their names next! 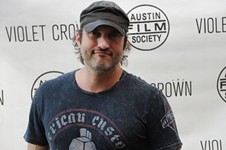