Where in the World Is Andreas Fabis' Heart? 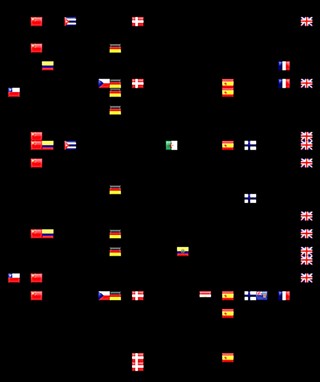 Is anyone from New Zealand, say, hooked up with someone from Kazakhstan? Does some fair daughter of icy Greenland have a serious Thing going with some favored son – or daughter, for that matter – of Madagascar? What about Lichtenstein and Norway? Ireland and Morocco? Israel and Palestine?

Andreas Fabis, who moved to Texas' Austin from Germany's Düsseldorf in 2005 to work in the computer-security field, has been wondering that for a while. And now he's got a website, World in Love, to crowdsource the answer. Crowdsourcing the answer from the very crowd, you might say, that's the source of the question itself: With 7 billion people in the world, is there one couple from each possible combination of countries?

Sounds plausible, right? Because, as that British holiday movie so recently reasserted at the Paramount Theatre downtown: Love actually is all around.

But last week I narrowed the planet down to a single table at Thunderbird Coffee on Manor Road, sat across from the charming Fabis, and had him give me the lowdown on this romantic use of the intarwebs …

Wayne Alan Brenner: What sparked the idea for this project of yours?

Andreas Fabis: A couple of years ago, some friends and I were talking at a bar, and I remember asking, "So, with 7 billion people, do you think there's one couple from each combination of countries?" Is there someone from North Korea married to someone from Tonga? And it was hard to come to a conclusion, because, on the one hand, 7 billion people – and that's just the ones that are alive right now – and if it happened 100 years ago, I'll take it – so it should be possible. And, on the other hand, it seems very unlikely that that would ever happen. So I thought, "Let's try and find out." And I programmed that little site – and of course that wouldn't be ultimate proof of whether it's true or not. It could well be true, but I'd just never reach all the people. But, at least, I wanted to give it a try. And now, just seeing all the little stories come in that are really heartwarming, from the couples from different countries. And the research I'm doing to try and find ways to promote the site in different countries has taught me a lot about the issues that bi-cultural couples face, that's really interesting and a reward on its own.

Brenner: In some countries – I'd call them repressed – you couldn't be so open regarding same-sex couples. But I see on World in Love that there's hetero-couples, there's homo-couples. So is there sufficient anonymity with this, even though there are usually photos of the couples?

Fabis: All you have to put in are your first names. And I'd like to have a picture, just so there's a visual representation. But I don't log anything; there's no email addresses or last names. So I'd call it semi-anonymous. And of course it's voluntary. Also, I have to say, we don't have any way of verifying it, so if somebody wants to lie, if somebody wants to be a jerk, I have no way of preventing that. So I'm appealing the good nature of people … but so far I haven't seen anything that would make me believe "Oh, that's really unlikely, guys." That's how far the anonymity goes. Which is bad, sometimes, because sometimes people upload a photo the wrong way, or they forgot to indicate the countries, and it's like, "Ah, I need to get back to you guys – but I can't." I've lost a few because of that.

Brenner: The ones that I've seen already, those people look like some actual happy couples. Even the ones that aren't exactly, ah, current.

Fabis: There is a bunch of historical figures and, of course, royalty – especially for Monaco, because it, ah, it seems like the only way to get people from there is to go to the royal family. And I think a few of those couples have ended badly in the meantime? But I would look at it historically: If at some time, in the past, they had been in love – I'll take them. Obviously, there's marriage photos in there that were taken professionally, but also a few that are phone-pictures taken on the spot and submitted. So there's all kinds of stuff going on.

Brenner: And how do you get the word out about this project?

Fabis: Well, locally – and I hope this article will help. Although the U.S., of course – the U.S. and Germany are two countries that I have a lot of contacts in, so I'm well-stocked by now. But, for example, I'll Google for "Indian Bi-Cultural Couples." And I found the blog of a woman who writes about her experience with her Indian husband – she's an American – and I wrote to her and said, "Hey, I have this site – you wanna sign up?" And she did. And within an hour, I got 12 more Indian couples with foreign partners, because they know people. And so I'm trying to find stuff like that: Travel blogs, people who travel a lot. And sometimes I get these spurts of activity, like "Oh, five from Australia!" "Three from New Zealand!" And that's always fun. And also what I like is when I got a Turkish/Greek couple, and a Palestinian/Israeli couple – and that is sweet to see when that happens. I also learned that, because of the Defense of Marriage Act being struck down, if you Google "foreign couples" or "bi-cultural couples," you get hundreds of hits of same-sex couples basically fighting to get their partners accepted under American law as their spouse – and there's an amount of uncertainty, where some states allow it, and some don't, and it's really difficult to find the legal status of that.

Brenner: That's ridiculous and rough as far as marriage goes, but your site isn't "World in Marriage," it's "World in Love," and so it's good to see all these same-sex couples, and, if anything, I'll bet it helps promote decency instead of repression and, ah, stupidity.

Fabis: And a lot of couples met when neither one of them were in their home country – so I think there's a lot of ex-pat hookup happening around the world. It's like, "Oh, you're from Greece and I'm from Argentina, but we met in Malaysia!"

Brenner: Are you seeing yet any particular hotspots where that happens a lot?

Fabis: It's pretty much all over, but I also found things about, like, Asia, certain countries there – South Korean men taking Vietnamese or Chinese wives. That seems to be a huge theme, Vietnamese and Chinese wives coming into all these other Asian countries. Which I didn't know at all – so there's a lot of interesting stuff that I'm learning, that I was not aware of, and that's its own little reward. And I programmed it so I get a message on my phone every time somebody signs up. So that's nice: Waking up in the morning, like, "Oh! Three new entries!"

Brenner: So you're doing your computer-security work for money, you're doing "World in Love" as a side-project, and you're ridiculously involved in the local improv scene. I see you on all the improv stages.

Fabis: Yes, improv is definitely a very big hobby of mine. It's my creative outlet. But there's a lot of computer people who do improv, and I think it's their creative escape from doing basically very technical work.

Brenner: Did you do improv in Düsseldorf?

Fabis: I did the next best thing: I did Live Action Role-Playing games.

Fabis: Yeah, I helped organize them. It's relatively easy to rent a castle in Germany. Many of them are in their medieval state, and they get leased out to – usually, mostly – rich people. And they can live there or whatever, but they also have to do the upkeep and have it open to the public for tours or whatever. So we did that – and that's a little like improv, where you have different characters all the time, and we make up the story with everybody else as we go. And my big regret is that I didn't know improv while I was doing LARP – because so many of the rules of improv would be awesome for it. But, yeah, that's my background – and it fit right in here.

Brenner: And here you are, and you're going from Austin to Beijing, and you have skills that could land you safely anywhere in the world, pretty much. But you're gonna stay in Austin?

Fabis: I wouldn't be sad to be somewhere else in the world, but I would be sad leaving all the people behind, all the friends I've made here. I really enjoy being in Austin, but I think the people are what makes it special. And maybe it's my German nature, because leaving the country is not a thing that many people do: You usually even stay in your home city, often for your whole life? It's just, I think, a thing. So uprooting everything again and moving somewhere else? I don't want to do that. And I would miss the sun – unless I moved somewhere that also had a lot of sun. That would be my big fear if I moved back to Germany: That there are actual seasons and you have, ah, six weeks of sun in a year. And I don't think I would take that well.

Brenner: But you do alright with the 110 degrees for a couple of weeks here?

Fabis: I can take the heat.

Austin's Only Downside?
Does not compute!