Bang Your Head With 'Necronomica' 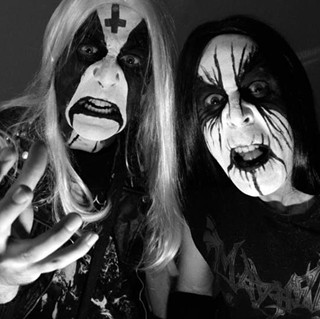 Tired of giving thanks? Want something really awesomely evil to wash all that niceness out of your ears? How's about a big ol' blast of film festival fave "Necronomica"?

The latest from Austin filmmaking siblings the Brothers Bogart, Necronomica is the moving tale of two musicians, Absu (Mark Scheibmeir) and Borknarg (Judd Farris), who are struggling to keep going after their drummer Mortimus quits their black metal band Necronomica. Can a drum machine ever really full the place of their friend, now he's gone to join Scrotal Decay? Will a fog machine be enough to make the most truly evil band in the world? Or will an unexpected goat's head bring the pair together?

The short debuted at SXSW this year, but it isn't the Bogarts' first experience with SXSW or with goats: In 2009, Cliff and Kyle created competition fave Artois the Goat. Since then, it brought the house down at the Housecore Horror Film Festival, and now it's not just on Vimeo – it's a Vimeo Staff Pick.

The siblings have recently re-united with local scoring supremo and Artois sonic architect Brian Satterwhite (Sushi: The Global Catch, Man on a Mission: Richard Garriott's Road to the Stars) for their next feature, Year of the Frog. But for now, mosh your heart out to the blacker-than-black metal of "Necronomica".