Update from Wizard World on 'Fire and Ice', 'Sin City 2' and more 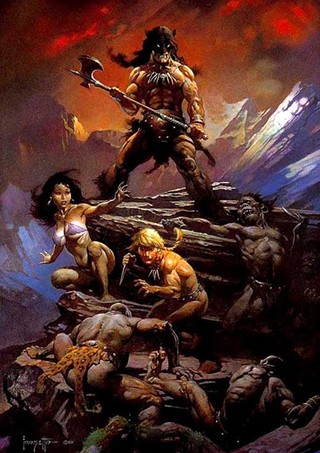 What's Robert Rodriguez up to next? Last Saturday at Wizard World Austin Comic Con, Austin's most notorious and prolific film maker gave a quick tease of what's in store out at Troublemaker Studios.

Firstly, Rodriguez's leap onto the small screen with the new El Rey Network. Panel attendees at his one hour talk got to see a quick sizzle reel for the new alternative station. "A lot of the country doesn't see themselves reflected in a positive, iconic, exciting way," Rodriguez explained, and this was the first real chance to sample the programming.

Aside from the 10 episode TV adaptation of his 1996 bloodsucking classic From Dusk Till Dawn, Rodriguez's presentation promised the Untitled Latin James Bond project, plus a mixture of grindhouse classics, sports, animation and music. Of course, there's going to be the whole Troublemaker Studios output to fill some broadcast hours, but with an initial investment of $250 million, El Rey will definitely open with a bang with its soft launch in December. "Content being king," Rodriguez said, "El Rey is going to be the king of content."

Now, the big film news: Sin City 2 should be out August 2014. The sequel to his pulpy and striking adaptation of Frank Miller's neo noir franchise will draw heavily on Sin City: A Dame to Kill For (thus the rumored new name, Sin City: A Dame to Die For) plus new material fresh for the screen.

For a lot of film fans, Sin City is Rodriguez's greatest cinematic achievement. So they may want to hang on to their helmets for the big reveal from the day: Early test footage and concept art from Fire and Ice, the epic sword and sorcery creation of legendary fantasy artist Frank Frazetta. Rodriguez is an unabashed and unapologetic advocate for the master of pulchritudinous prehistoric princesses and flesh-rending barbarians, even getting Frazetta to produce a poster for the original From Dusk Till Dawn. He got Frazetta's approval back before the artist died in 2010, and has been working openly on this project since 2011.

Rodriguez was very complimentary about the 1983 animated movie by Ralph Bakshi, for which Frazetta not only provided the germ of the original story but also helped choreograph some of the action sequences. However, what Rodriguez showed off in this brief taster was much more epic in scale, with thousands of Frazetta's trademark ape men streaming across an endless bridge into battle, and jagged sorcerously-created glaciers bearing down on green forests. According to Rodriguez, he wants to create the feeling of stepping into Frazetta's lush, fluid and violent world, much like Sin City brought two-fisted life to Miller's drizzle-soaked streets.

Ultimately, it's all about paying tribute to Frazetta's artwork, and back during SXSW 2012, Rodriguez discussed his plan to move the entire Frank Frazetta Museum to a brick-and-mortar location in Austin. That plan may still be a way away, but there was a teaser with the display of 10 original Frazetta pieces, including Death Dealer, Death Dealer 2, and Swamp Demon. Rodriguez's aim was to shock people out of the idea that the artist was just a schlocky fantasy guy, and show them the amazing technique he put into works like Moon Maid.

For those that couldn't make it on the day, Rodriguez took his own digital photos of the works and produced limited edition giclée prints. Much as he loved the ubiquitous images from their constant replication on posters, in books and even album covers, the old printing techniques had never really caught the master at his best. This new sumptuous collection is the closes fans will get until the whole collection is on display.

Proceeds from the sale go to the Frazetta family and the construction of the permanent museum. No word yet on when they'll break ground, but don't be surprised if it's the same time as Fire and Ice carving up screens.