Perfect Day For a 'First Date'

As you ponder your Thanksgiving blowout, a salutary warning from SXSW short favorite, "First Date": What comes in, must go out.

However, the local director made his first real splashes in the bowl earlier this year with "First Date". It's a bowel-rippling gross out comedy about a boy (Jimmy Gonzales), a girl (Victoria Eisele), and that terrible moment of realization about the shortcomings of the modern toilet roll. After ripping through the DC Short Film Festival as the audience award winner, it premiered in Austin as part of the Austin Film Society showcase at SXSW. And now it gets to deliciously soil your screens.

Warning: Do not watch while eating chocolate pudding, pumpkin pie filling, or pretty much anything. 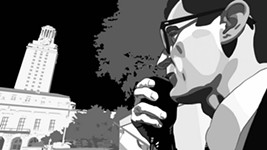