Kickstart Your Weekend With 'Hi, How Are You'

(Not a dating advice column) 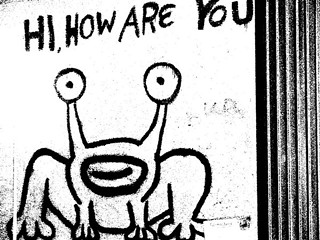 Austinites have more than a few idols to be thankful for: Willie Nelson, Barbara Jordan, Daniel Johnston…

So if a self-respecting Austinite found out that there's a Kickstarter campaign running for a short film starring Johnston – even if it's already raised $10,000 more than it hoped – he or she would practically have to contribute.

Enter "Hi, How Are You: A Short Film Starring Daniel Johnston," which creator Gabriel Sunday describes as "musical tale of an aging artist encountering psychedelic dreams, nightmares, and characters from his past." The animated, collaborative project includes an original score and Daniel Johnston stories never before shared. Here's more from the creative team:

Our hope was to bring his stories, memories and art to life. What ensued during shooting was beyond anything our crew could have hoped for. Daniel not only opened up and told stories none of us had ever heard, but embraced and relished the idea of speaking with his younger self, gifting advice and warnings from the future. That became the backbone of our script. As shooting continued Daniel interacted with imaginary creatures from his cast of Spirit World characters like Jeremiah and Joe the Boxer. It was a truly unreal and moving experience. The result is something that will appeal not only to Daniel fans, but to any artist trying to find their way.

As followers of Johnston's life and career will no doubt understand, the rewards offered to backers are possibly the best part: The limited-edition "Daniel Draws You" reward is already all snatched up, but signed and illustrated vinyl, custom songs, posters, and executive producer credits are all still up for grabs.

Watch the pitch video below, then check out the full campaign here. Whichever reward level you choose, we're pretty sure true love will find you in the end.

Kickstarter, crowdfunding, Daniel Johnston, Hi How Are You, Gabriel Sunday