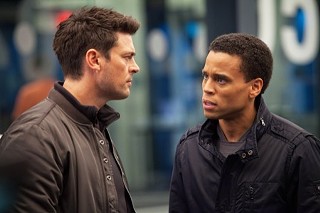 Fox has been promoting the hell out of Almost Human, the new futuristic crime drama created by Fringe’s J.H. Wyman. Too bad the premiere is a total dud.

It’s an intriguing enough premise: Set 30 years into the future, where the crime rate has reached dangerously high levels, all police officers are paired with hyper-intelligent androids. Star Trek’s Karl Urban stars as John Kennex, who's partnered with a decommissioned model named Dorian (Michael Ealy, in an curiously subtle performance), who possesses the ability to process complex, borderline human emotions.

The show portends to stage a buddy cop rapport between the two as they solve weekly cases and try to unearth the mystery behind the police ambush that put Kennex in a 17-month coma and lost him a leg. It’s an interesting take on the straightlaced and buggy crime-fighting duo trope: This time, the weirdo-half really is different. But they’ll need to work on the leads’ back-and-forth; the pilot has sets a lazy, cranky “Robots, man!” tone with Kennex and one of sagely wisdom with Dorian. For a show set in the future and with a J.J Abrams producing credit, so much of Almost Human’s premiere feels rusty.

In many ways, Almost Human and its premiere (which includes Lily Taylor and Minka Kelly as the police captain and a fellow detective and obvious love interest for Kennex, respectively) positions itself as something I’ve been calling Medium TV, which is all the rage in broadcast dramas this season. You know Easy TV: It’s all those blue-skies shows on USA and those unnecessarily grisly but effortlessly charming TNT crime dramas that sound like Italian menu items (ahem, Rizzoli & Isles). You can count mainstays like the NCIS franchise and populist comedies like Modern Family among the Easy TV ranks, too. (Both of those series are also currently in syndication on USA. Synergy!)

Medium TV has prestige cable drama storytelling and metaphorical aspirations but goes about them as Easy TV would. Sometimes, it totally works: Sleepy Hollow, the brazenly bonkers supernatural thriller Almost Human is replacing for the rest of the season, is a total pleasure. (Don’t worry, it’ll be back next year – Fox already picked it up for a second season.) Others, like NBC’s The Blacklist, are pure bait-and-switches that coast on the idea that being about something (domestic strife, the deviant relationships formed in the name of national security) is enough, when really, it’s better when they’re also saying something about them.

It’s hard to tell how Almost Human will play out, though of any of this season’s Medium TV, it has the most to gain from what it could say: Like the late, great Battlestar Galactica, Human presents a serious (and topical) metaphysical quandary: What does it mean to be human? Dorian exists as a subversion of the Uncanny Valley – the point at which something nonhuman (mostly robots and animated characters) exhibits enough inexact human capabilities that it feels strange or repulsive to actual humans. Because Dorian is too lifelike, his model has been replaced with others that have obvious tics that code to humans as robotic. It’s interesting that in Almost Human’s vision of the future, we’re still struggling as a society with whether we should make our robots more human or ourselves more robotic (à la Google Glass). But present-day humans should know this: Go ahead and set your DVR to record the whole season, but you can skip the premiere.