Rumors fly this may be for a galaxy far, far away

Warning: Contents may not actually contain any traces of Star Wars whatsoever

Young adult actors in town, better get some new head shots. Disney is casting two parts in an upcoming production in Austin later this month, and there's heavy speculation that the Force will be strong with the lucky actors.

Casting call website Cast It Systems has just launched a subsite www.opencastingcall2013.com with one project on it: "Nationwide search for lead roles for a Disney feature film"

The nationwide auditions make a stop in Austin on Nov. 22 at the Hilton, 500 E. Fourth, 3-8pm (coincidentally right next door to the upcoming Wizard World sci-fi and fantasy convention). Veteran casting agent Maryellen Aviano (The Hangover III, Captain America: The Winter Soldier) will be present.

So why all the hubbub? Because the Internets have decided that this is an open casting call for JJ Abrams' next big project: Star Wars Episode VII.

Last week, the BBC reported that the same parts were being cast at open auditions in the UK, and the rumor mill went into overdrive.

There aren't many options. Most of Disney's future slate is either in production or animated, so that really leaves only three planned live-action features: first, the adaptation of the Artemis Fowl books, but the character descriptions don't match, and second, the remake of Flight of the Navigator, but again, the casting call doesn't really jibe, unless they're seriously rewriting the story. So unless there's a super-secret project in the works, by process of elimination that means the next Star Wars installment.

Seeking: Young woman to play 17-18 Years old. Must be beautiful, smart and athletic. Open to all ethnicities (including bi- and multi-racial).

RACHEL:
Was quite young when she lost her parents. With no other family, she was forced to maker her way alone in a tough, dangerous town. Now 17 she has become street smart and strong. She is able to take care of herself using humor and guts to get by.

Always a survivor, never a victim, she remains hopeful that she can move away from this harsh existence to a better life. She is always thinking of what she can do to move ahead.

Seeking: Young man to play 19-23 years old. Must be handsome, smart and athletic. Must be over 18.

THOMAS:
Has grown up without a father's influence. Without the model of being a man, he doesn't have the strongest sense of himself. Despite this, he is smart, capable and shows courage when it is needed. He can appreciate the absurdities in life and understands you can't take life too seriously.

There's a lot of speculation that these are fake names, covering for something more stellar. But then, since two characters in the original trilogy were called Luke and Ben, maybe not.

If this is what people think it is, expect production to begin soon. Shooting is scheduled to begin at England's legendary Pinewood Studios in early 2014, and Disney is pushing for a late 2015 release. However, the script is still in progress: Original scribe Michael Arndt (The Hunger Games: Catching Fire, Little Miss Sunshine) is out, and has been replaced by Abrams and Lawrence Kasdan, who co-wrote The Empire Strikes Back and Return of the Jedi.

UPDATE: Disney just formally confirmed that Star Wars: Episode VII will be released on December 18, 2015. The Walt Disney Studios chair Alan Horn said, "We’re very excited to share the official 2015 release date for Star Wars: Episode VII, where it will not only anchor the popular holiday filmgoing season but also ensure our extraordinary filmmaking team has the time needed to deliver a sensational picture." 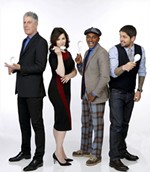